"I believe in three tenets of battle -- firepower, firepower and more firepower. Should the Omnissiah have wished otherwise, he would not have provided me with such a mighty tool as the Razorback. I long for the day in which my entire Chapter can ride to war in transports such as these, vehicles whose rage can be given voice through their sanctified armaments."

The Razorback is an armoured personnel carrier (APC) used primarily by the Chapters of the Adeptus Astartes, and also by other Imperial adepta such as the Inquisition and the Adeptus Arbites.

The Razorback is a variant of the Rhino chassis that sacrifices some of the basic Rhino's troop-carrying capacity in order to add a top-mounted weapon system.

The Razorback's top-mounted weapon is remote-controlled from inside the vehicle, and can be equipped with several different weapon types, such as a twin-linked Heavy Bolter or a twin-linked Lascannon.

Unlike the basic Rhino, which is either unarmed or armed with only a pintle-mounted Storm Bolter, the Razorback's weapon system allows the vehicle to stay after deploying its cargo of troops and act as heavy fire support. Due to the wide range of weapons that can be equipped on the Razorback's remote-controlled system, it is capable of being deployed against targets ranging from light infantry to heavy armour.

There exist older patterns of the Razorback that use a manned weapon system instead of a remote-controlled one. The remote-controlled turret uses the same logic-engine (cogitator) that is found on the Land Raider and is able to provide rapid and efficient threat response that reduces the crew to only one, although a second crew member can still be used in cases where the driver is too busy to control the turret.

Standard Astartes battle doctrine dictates that Razorbacks should be deployed as fire support vehicles, accompanying Rhinos or infantry squads into the thick of battle. As Rhinos have little in the way of firepower, even a single Razorback assigned as escort can dramatically increase the effectiveness of a strike. Impressed by the tank's versatility, however, several Chapters field the Razorback in other roles, employing them as mobile command centres and heavy reconnaissance screens.

The Standard Template Construction (STC) database containing the Razorback's design was uncovered by Chief Artisan Tilvius in the 36th Millennium in the Southern Rim region of the galaxy. This discovery was a great triumph for him, though reports say that another STC template was also found at that time though the vehicle schematics it contained were never put into production.

After nearly two hundred Terran years, the Razorback's design was finally field-tested and Tilvius handed the full contents of the Razorback's STC template to Mars along with records containing evidence that the Razorback had been used during the Dark Age of Technology to carry human troops into battle successfully.

It had long been suspected that there had existed a troop-carrying variant of the Predator tank, and the Razorback seemed to fit that description perfectly. Shortly after reviewing its records, the Adeptus Mechanicus deemed the omens good and quickly approved the template, and the production of the Razorback officially commenced on the Imperium's Forge Worlds.

Since the 36th Millennium the Razorback, with its increased firepower, has filled the gap left by the Predator as it developed into a full main battle tank. Originally, the Predator was also a troop carrier, and it may be that the Razorback design is a hold-over from those ancient days, an evolutionary path only realised with Tilvius' discovery. The Razorback, capable of carrying six Battle-Brothers and providing heavy weapons support for an Astartes squad on the ground, proved a useful addition to most Space Marine Chapters' armouries.

Some Chapter Masters believe the Razorback fails as a troop transport, not being able to carry a full squad, and fails as a tank, lacking as it does heavy armour protection and not enough heavy weapons to take on enemy heavy armour in a full-on tank battle. Other commanders find it useful in a number of roles. First, the Razorback provides protection for squads operating in support of armoured attacks by Land Raiders and Predators.

Secondly, it is used in a heavy reconnaissance role, supporting Astartes Bike Squads or Attack Bikes as they seek out the enemy and launch lightning strikes ahead of a Space Marine main force.

The Razorback is capable of being equipped with many different weapons, and due to it being so new an addition to the Imperium's arsenal it lacks the venerated status of the Predator and the Rhino, the use of which date back to the Great Crusade. This means that there are fewer taboos when it comes to reinterpreting the vehicle's design and many Chapters exploit this by adding unapproved weapons and upgrades.

The Blood Angels Space Marine Chapter uses several variants only fielded by their Chapter, such as twin-linked Assault Cannons and a Flamestorm Cannon. The Blood Angels even have a special pattern of Rhino chassis known as the "Lucifer Pattern," which replaces the vehicle's engines with overpowered ones allowing it to move faster during combat.

The Grey Knights and the Ordo Malleus of the Inquisition use a special variant that is equipped with twin-linked Psycannons intended to combat daemons and psykers. The oldest Razorback pattern, the Mark 1 "Stronos" variant named after the de facto Chapter Master of the Iron Hands Chapter, the Iron Father Kardan Stronos, was equipped with twin-linked Plasma Cannons and a single Lascannon.

This pattern was an extremely powerful and a widely employed vehicle, but due to unknown reasons the production of the Mark 1 was halted and all records of its existence sealed. The "Stronos" Pattern is now an extremely rare sight amongst the Chapters fortunate enough to have one in their possession.

The Razorback is also able to be outfitted with a Hunter-Killer Missile Launcher, Extra Armour Plating, a Pintle-mounted Storm Bolter, ram spikes or a Dozer Blade, a searchlight, and Smoke Launchers.

A standard Razorback is armed and equipped with:

A Razorback may take the following pintle-mounted weapon:

Razorbacks may also have a variety of vehicle equipment such as:

The following is a list of all known variant patterns of the Razorback:

Notable Users of the Razorback

An Infernum Pattern Razorback of the Angels of Fire Chapter armed with a Multi-Melta.

An Infernum Pattern Razorback of the Astral Claws Chapter before their fall to Chaos; this vehicle is equipped with a Multi-Melta.

A Razorback of the Blood Drinkers Chapter equipped with twin-linked Heavy Bolters and a Dozer Blade.

A Razorback of the Death Strike Chapter armed with twin-linked Lascannons.

An Infernum Pattern Razorback, the Red Widow, of the now-extinct Fire Hawks Chapter with a Multi-Melta.

A Razorback of the Howling Griffons Chapter armed with twin-linked Lascannons.

An Infernum-pattern Razorback of the Howling Griffons Chapter armed with a Multi-melta, painted in the Codex Astartes-approved Night World Camouflage Pattern.

A Razorback of the Raptors Chapter's 2nd Company equipped with twin-linked Lascannons.

A Razorback of the Red Scorpions Chapter armed with twin-linked Lascannon.

A Mark VI Razorback of the Space Wolves Chapter armed with a twin-linked Heavy Bolter.

A Razorback of the White Consuls Chapter armed with twin-linked Lascannons.

A rare Mark IIb Razorback with a manned turret. 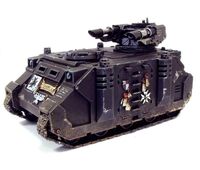 A Razorback of the Black Templars Chapter armed with twin-linked Lascannons. 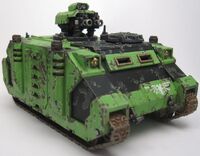 A Razorback of the White Scars Chapter during combat. 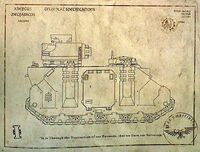 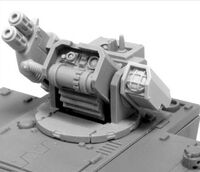 An Infernum Pattern Razorback turret with a Multi-Melta and a Searchlight.

A Razorback turret with a Lascannon and a set of twin-linked Plasma Guns.

An alternative turret mount for a Razorback, the twin-linked Assault Cannons are spaced apart. 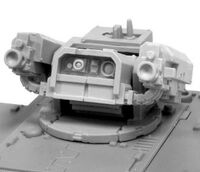 An alternative turret mount for a Razorback, the twin-linked Heavy Bolters are spaced apart.

A squadron of Ultramarines Razorbacks moving across the battlefield while providing covering fire for infantry on foot.
Español
Community content is available under CC-BY-SA unless otherwise noted.
Advertisement