The Raptor Imperialis, also called the Raptora Imperialis, was an early icon employed by the Emperor of Mankind and his nascent Imperium of Man during the Unification Wars and the Great Crusade to represent the Imperial cause.

Originally, this honour badge was only used by the proto-Astartes known as the Thunder Warriors, but would later be adopted by the genetically-enhanced regiments of the Excertus Imperialis and the early Terran-born Legiones Astartes as well.

As the Great Crusade entered its later stages, the Raptor Imperialis was replaced by the more common Imperial Aquila icon and it became a sigil instead worn by those Imperial troops who had personally fought alongside the Emperor.

By the latter years of the Great Crusade, this honour was usually found only amongst the more senior Terran Astartes of the Space Marine Legions who had seen significant action during the final campaigns of the Wars of Unification. 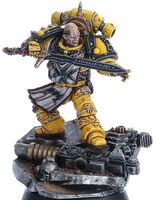 First Captain Sigismund of the Imperial Fists Legion; note the Raptor Imperialis located on the left knee plate, indicating that the first captain has fought in battle alongside the Emperor of Mankind
Community content is available under CC-BY-SA unless otherwise noted.
Advertisement