The Ranger Long Rifle is the favoured weapon of Aeldari Rangers and Pathfinders. It is a long-barrelled rifle, superficially similar to the Imperial Sniper Rifle and Imperial Long-Las Rifle, that fires energy bolts capable of piercing most armour when aimed correctly. Unlike the mass-produced weapons of the Imperium, these potent Aeldari weapons are hand-grown by Bonesingers with specific attention paid to the eyesight and grip, creating a weapon perfectly adapted to its user.

The Ranger Long Rifle uses a Gyrostatic Arm to keep the weapon stable, dispensing with the clumsy bipods that must be used by the lesser races with their Sniper Rifles. The Gyrostatic Arm also all but eliminates recoil. Whereas the artificial crystals used by Imperial laser–technology struggle to maintain a focused beam over long distances, the psychically-grown crystals used by Aeldari laser weapons are able to focus a tight beam of coherent light over a much greater distance, allowing a skilled user to punch through weak points in armour at great distances.

The Weapon of Wanderers

The long rifle is the primary firearm used by the Rangers, outcasts who wander the galaxy experiencing all the sensation that is denied to them at home. It is similar in function to the sniper rifles used by the Imperium's armed forces, but superior in design and efficiency. Each long rifle is crafted by Bonesingers, moulded from psychoactive Wraithbone to enhance the already preternatural senses of its wielder. A long rifle is, as the name implies, a long and elegant weapon, as much a piece of art as a tool for killing. It works by projecting a minuscule needle from the barrel, suspended in a laser beam. The psychically-grown crystals that project this energy bolt, deadly in its own right, are capable of far greater accuracy than Imperial laser weapons, with a tighter beam that suffers less from diffusion over long ranges.

Many an enemy commander has fallen to a pinpoint shot through an eye or a weak point in armour, leaving their bodyguards unable to locate the source or, often, even the entry wound, the Ranger who took the shot often sitting a mile away or more. The pan-spectral sights used in conjunction with long rifles are equally remarkable. More than just a rangefinder, they allow the firer to view their surroundings and target in multiple spectra, both physical and psychic. This means that it is rare that a Ranger with a long rifle can be ambushed by enemy stealth troops or surprised by an unexpected force shield or psionic barrier, allowing them to plan and execute shots that would be quite impossible for the snipers of other intelligent species.

Unlike many Aeldari weapons that are psychically linked with a single user, the long rifle is usable by anyone with the skill and patience to wield it. This is essential for Rangers, as few who forsake their craftworld and walk the Path of the Outcast do so permanently, and even fewer are able to commission their own rifle to take into exile with them. Most long rifles are therefore revered artefacts, passed down across the millennia from Ranger to Ranger. Most are named, and their history and notable kills are learned by their wielders, who desire little more than to add another piece to that roll of historic honour. 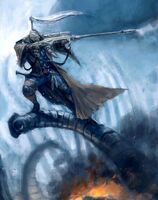 The famous Eldar Ranger Illic Nightspear takes aim with his Long Rifle Voidbringer
Add a photo to this gallery
Retrieved from "https://warhammer40k.fandom.com/wiki/Ranger_Long_Rifle?oldid=344967"
Community content is available under CC-BY-SA unless otherwise noted.