The Rampagers' Power Armour is painted red with a black Aquila and Chapter markings. The black squad specialty symbol (Tactical, Assault, Devastator, or Veteran) is indicated on the outer side of the right greave rather than the right shoulder plate. Company designation is indicated by the colour of the left knee plate. 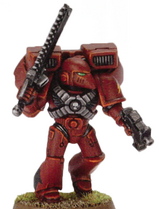 A Rampagers Vindicator
Add a photo to this gallery
Retrieved from "https://warhammer40k.fandom.com/wiki/Rampagers?oldid=184470"
Community content is available under CC-BY-SA unless otherwise noted.