Rampager Squads were specialised shock assault units within the ranks of the World Eaters Legion during the Great Crusade and Horus Heresy eras in the late 30th and early 31st Millennia. They were formed from the most savage and bloodthirsty warriors in the Legion, all of which had undergone prohibited psycho-surgery and now possessed the forbidden cortical implants known as the Butcher's Nails.

Following the reunification with their lost Primarch Angron upon the world of Nuceria, the bloody-handed Primarch enacted many changes within the structure of the XIIth Legion. Knowing how successful his own cortical implants were at boosting a warrior's prowess in battle, Angron ordered his Apothecarion to insert the Butcher's Nails implants within every Astartes of the World Eaters Legion to enhance their aggression and pain tolerance far beyond that which even the gene-engineered flesh of a member of the Space Marine Legions was capable. Initially, this posed difficulties, as Angron's implants were relics of a long-lost technology, little understood even by their makers, while removing them from Angron for close study would have proven fatal to the Primarch. The Legion's Techmarines and Apothecaries attempted to duplicate the process using the Primarch's own implants as templates to reverse-engineer the devices.

Early attempts to duplicate these implants were far from successful, and resulted in high rates of mortality and irrecoverable homicidal frenzy on test recruits. However, as time progressed, a viable form of the cortical implant technology was replicated and steadily improved, although it was never fully stable or its effects constant between subjects, and entire newly-formed companies of World Eaters Neophytes were implanted, as well as large numbers of existing World Eaters Astartes who volunteered for the dangerous operation. The majority of these Astartes were absorbed back into the XIIth Legion's line units, while those deemed perhaps too unstable for such tasks joined a growing number of near-berserker assault units known as Rampager Squads. The pain engine implanted in the skulls of these World Eaters forced them to enjoy killing above everything else. Even the comfort of brotherhood paled -- one of life’s few remaining pleasures for the World Eaters outside of battle. Other World Eaters focused their desire for berserk slaughter into martial discipline, mastering a variety of macabre and savage weapons patterned from those used by Angron's fellow arena gladiators and found on the Feral Worlds from which the XIIth Legion primarily drew its recruits during the Great Crusade. Even within these units, those too far gone to be anything but restrained as savages between battles became known as the Caedere or the "Butchers," a frightening portent of what was soon to come for the entirety of the XIIth Legion.

A Rampager Squad consisting of ten Legionaries or fewer and not equipped with Jump Packs often used a Land Raider Phobos as a dedicated transport. 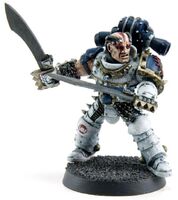 A World Eaters Legion Assault Squad member with twin Falax blades, special hand-to-hand swords with a distinctive shape, that were wielded with deadly accuracy and skill 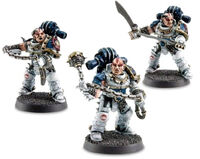