The Questoris Knight Styrix is amongst the rarest patterns of Imperial Knight armours ever produced. Housing Machine Spirits which some say became too accustomed to wholesale slaughter during the Age of Strife and the Great Crusade that followed it, many of the more conservative Knight Houses consider the Styrix to be a dark and malevolent pattern of armour, the wanton slaughter it unleashes being beneath the dignity of a true Knight. Other households hold no such reservations, loosing entire formations of Styrix Pattern Knights to mercilessly annihilate their foes.

Armed with a devastating Volkite Chieorovile and backed up with a Graviton Crusher and twin-linked Rad Cleanser, the Questoris Knight Styrix is easily able to eliminate large numbers of infantry at range. Whilst in close combat, its immensely powerful Hekaton Siege Claw can smash vehicles and tear buildings asunder, making it a powerful addition to any army.

The Styrix Pattern Knight armour is the equal of the Magaera in technological sophistication, and has been meticulously designed to facilitate the efficient eradication of infantry formations and supporting vehicles. Blasts from the Styrix's integral Graviton Gun can pin hapless targets in place while scything volkite beams and flesh-boiling rad-cleanser discharges reap a heavy toll of lives. The anima of these armours, steeped in slaughter and death in its most visceral sense, often develop distinctly malevolent machine spirits, and have garnered something of a dark reputation in many of the more conservative Households, who view the wanton slaughter of impotent infantry as beneath a true Knight. Among Mechanicus-oathed Houeholds, the Styrix is held in higher esteem, especially among those scions who have undergone extensive augmentation in honour of their enigmatic patrons and share their antipathy for the weakness of flesh. The pitiless thrall-Knights of House Col'Khak are renowned for fielding entire formations of these machines in support of the Legio Atarus ("Firebrands"), sweeping clear enemy infantry from the Titan's feet in a furious blast of energy beams and cleansing radiation. 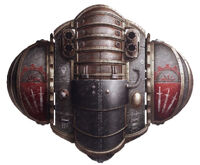 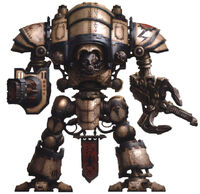 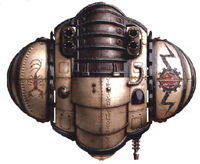