A Pyrovore is a species of Tyranid which pre-digests biomass to provide minerals and fuel for a Tyranid Hive Fleet. Its body is a complex array of bladders and stomachs, driven by the instinctive need to feed, with a deadly maw dripping with corrosive acids strong enough to break down flesh, bone and armour into a smouldering mucous. They are often found on battlefields feasting on the dead and wounded, and can even devour metals and rocks. When facing an enemy, a Pyrovore can launch a searing fireball from the dorsal flamespurt bio-weapon that grows out of its own flesh. If injured, the acidic contents of a Pyrovore's various stomachs sprays out of its wounds over its enemies; if killed, the volatile ichors of a Pyrovore's insides have a good chance of igniting in a tremendous explosion, engulfing everything around it. A Pryovore has limited intelligence, driven only by the need to feed. Its flamespurt weapon-symbiote has a separate brain that functions independently from the Pyrovore, unlike many other Tyranid organisms which bond their minds with their bio-weaponry. The flamespurt weapon actually possesses a larger mental capacity than its host, instinctively attacking any nearby non-Tyranid lifeforms whilst the Pyrovore gorges itself.

The Pyrovore is little more than an ambulatory digestive system set in a squat and vicious body, containing nothing that does not serve it in sating the Great Devourer’s hunger. Its role within the Tyranid swarms is to find the choicest morsels of the worlds the Hive Fleet consumes, from living flesh to exotic minerals required by the strange leviathans in orbit above it. Serving the Pyrovore in this function are several unique biomorphs, all of which stem from the volatile and caustic chemicals flowing throughout its alien system.

A Tyranid Pyrovore fires its bio-weapon 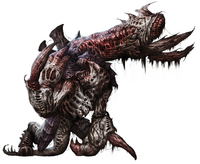 A Tyranid Pyrovore of Hive Fleet Leviathan
Add a photo to this gallery
Retrieved from "https://warhammer40k.fandom.com/wiki/Pyrovore?oldid=288507"
Community content is available under CC-BY-SA unless otherwise noted.