The Pyroclasts were a specialised formation, akin to a Legion Destroyer Squad, utilised by the Salamanders Space Marine Legion during the Great Crusade and Horus Heresy eras during the 30th and 31st Millennia. This uniquely armed elite formation carried prototype and highly adaptable flame-projector weapons into battle, bringing utter destruction to their enemies with cleansing, purifying flames. It is unknown if the modern-era Salamanders Chapter still utilises this specialised formation within its Chapter organisation.

The dreaded Pyroclasts were the burning fury of the Salamanders Legion given material form. The Salamanders shunned conventional Legion Destroyer units in its Legion, save for a small cadre retained for xenocide operations, due to the training and unclean nature of the weapons they wielded. Vulkan created the Pyroclasts to fulfil the role of bringers of utter destruction instead, creating for them advanced and extremely powerful thermal/incendiary weapons of his own devising. They Pyroclasts embodied the Promethean mantra: destruction and renewal through purification of cleansing fire. To the Salamanders fire is more than merely a weapon; it has an almost mystical function and truth, and embodies both purifying destruction and the potential for rebirth and redemption. But for renewal to occur, what has gone before must be wiped away; purified by fire. It is this last concept that the Pyroclasts embodied, and in battle they were relentless and remorseless, and where they were unleashed there could be no possibility of mercy or reprieve from their fire. 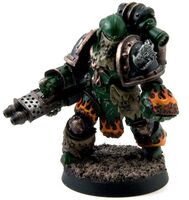 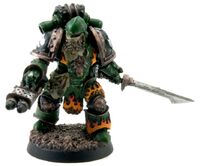 A Pyroclast Legionary armed with a Pyroclast Flamer and Power Sword

A Pyroclast Squad, ready for battle
Español
Community content is available under CC-BY-SA unless otherwise noted.