A Pulse Carbine is a T'au Pulse Weapon that utilises pulsed induction fields to propel lethal micro-bursts of plasma over long ranges. A Pulse Carbine is a shorter and more lightweight version of the Tau Pulse Rifle, and has a damage output greater than the standard weapons of every other intelligent race the Tau have yet encountered.

The Pulse Carbine sacrifices the Pulse Rifle's longer range for greater portability and an underslung Photon Grenade Launcher. This allows the weapon to fire a Photon Grenade over a short distance, a capability that is especially useful in close quarters where the weapon can then be used to pin down those enemies affected by the Photon Grenade's disorienting effect.

Pulse Carbines are most commonly issued to Pathfinder scouts and to Fire Warriors when the situation dictates their need, such as during special operation missions. Gun Drones also feature twin-linked Pulse Carbines as their standard armament, whilst DX-11 Exploratory Drones are armed with a single Pulse Carbine as a basic self-defence weapon.

Pulse Carbines were first developed during the Tau Empire's Campaign of Cleansing from 606.M38 to 792.M38, the first prolonged war of the Tau against the Orks. Whilst the Tau suffered many defeats early on, they were ultimately able to eradicate the Greenskins, thanks in part to the Earth Caste refinement of the first Pulse Weapons. As a result of this campaign, the Dal'yth Sept was successfully founded.

The bulk of a Pulse Carbine's barrel is surrounded by coils of conductive material, visible in some patterns along the top of the weapon, which produce a solenoid. When current is passed through them, these coils generate a magnetic field oriented along the barrel. At the front of the weapon are its two muzzles, just behind which is a circular apparatus that resembles a large bolt head and that serves as a recoil stabiliser. Behind the barrel mechanism is the primary magazine, and behind that the trigger assembly and stock. Within the stock is the secondary magazine, or power cell, which is able to provide up to 24 shots before it needs to be replaced. A remote thermal sight adorns most models of Pulse Carbine, atop and slightly forward of the trigger assembly. This sight combines with the weapon's advanced stabilisers and recoil reduction to make it highly accurate during aimed fire. Unlike Pulse Rifles, a Pulse Carbine features an underslung Photon Grenade Launcher underneath its muzzle. However, it must be reloaded after each grenade is fired.

The Pulse Carbine works by electromagnetically accelerating a plasma shell down its barrel. In effect, it is a miniature mass accelerator. On firing, a ferromagnetic, solid slug is chambered from the magazine and turned into plasma by electromagnetic induction, as it would be relatively easy to alternate the coil current at frequencies sufficient enough to heat the coil to an extreme temperature while keeping it in the chamber. The solenoid is then charged fully, propelling the newly produced plasma out of the gun at an extreme velocity while keeping it cohesive. Though this electromagnetic field continues to keep the plasma together until impact, residual plasma is expelled from the barrel to produce the weapon's considerable muzzle flash. Maintenance of the field is also aided by a bolt-like apparatus, which increases the field strength and therefore the range. The weight of the bolt also serves to dampen the recoil from firing. Without the electromagnetic field, the fired plasma would all dissipate at the barrel mouth, producing a weapon with a range of approximately twenty centimetres. As it is, residual energy and waste plasma, together with the heat produced by energizing the coil, necessitates two barrels to avoid overheating.

The power required to generate these immense electromagnetic fields comes from the secondary magazine which is effectively a very powerful and dense rechargeable battery in the weapon's stock. It is changed less frequently than the primary power pack, and can be recharged from the firer's suit or combat armour. Vehicle-mounted Pulse Weapons are usually connected directly to a suitable power source, allowing higher rates of fire with sufficient heat dispersal and eliminating the secondary magazine. Pulse Weapon rounds do a great deal of damage on impact, mostly due to the extreme thermal energy of the plasma mass and the speed with which the projectile impacts, which helps ensure that armoured targets are more heavily damaged. The electromagnetic field that holds the charge together flattens on impact slightly before breaking, which causes the resulting impact to spread over a wider area than would otherwise be possible. The speed at which the plasma projectile is launched is so extreme, that in some cases, it has been known to "light the air on fire". 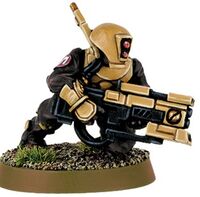 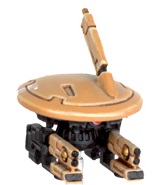 Tau Gun Drone armed with twin-linked Pulse Carbines
Add a photo to this gallery
Retrieved from "https://warhammer40k.fandom.com/wiki/Pulse_Carbine?oldid=335162"
Community content is available under CC-BY-SA unless otherwise noted.