The Prism of Fate

The Prism of Fate is a thrallband of the Thousand Sons Traitor Legion. They once ensured that adherents from each of the sorcerous cults of Prospero could be counted amongst their number, the better to steer their brotherhoods through whatever challenges their Primarch, and their Emperor, should ask of them. Since the devastation of the Horus Heresy, the Prism's Sorcerers have focused ever more obsessively on the variety of ways in which their Warp powers can inflict death upon their foes. The warband's Sorcerers take pride in never slaying one victim in the same way as another -- their longevity is such that imagination is counted the most kingly of virtues. The sect's Sorcerers are quick to unleash new forms of devastation upon their enemies, making them exemplars amongst the Thousand Sons' Cult of Change.

The Prism of Fate warband's colours are teal with golden trim. The Magister Templi Nonyc Teheterys also wears the yellow of Tzeentch, the Changer Supreme. White, being the colour created when all colours join as one, is a favoured hue amongst the Prism's Sorcerers. Employing a great many Rubricae, the patterns and symbols on their tabards mark them apart in a system that is incredibly complex despite its monochromatic basis. Seen in the Astral Plane of the Immaterium, these hues burst into a riot of colour that is painful to behold for those psykers not blessed by the Great Architect. Those few Rubricae aware enough to deliver inventive deaths are permitted to wear the yellow of the Changer.

Like the icons of many thrallbands of the Thousand Sons, the Prism of Fate's sigil of the Cult of Change is based upon the symbol of Tzeentch himself -- though reversed, it is still mystically potent. This usually takes the form of a white Mark of Tzeentch on a teal background, or reversed, as a teal sigil on a white background.

A Chaos Sorcerer of the Prism of Fate wearing white, a favoured hue amongst this thrall warband 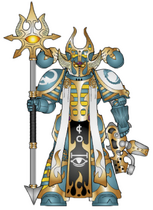 A Prism of Fate Sorcerer; note, in contrast to the favoured white hue, some Sorcerers also don black; those who harness both light and its absence are believed to achieve true mastery

Various Rubricae of the Prism of Fate thrall warband

A Rubricae of the Prism of Fate; these ill-fated Astartes warriors are seen as dull, almost pitied creatures, for they deliver the same death over and over; those few Rubricae aware enough to deliver inventive deaths are permitted to wear the yellow of the Changer

A Sekhmet warrior of the Prism of Fate thrall warband

A Tzaangor of the Prism of Fate thrall warband. Note: As a devotee of Tzeentch, this fell creature bears the symbol of the Sorcerer to whom he is bound, fighting as a living barrier as much as a methodical killing machine

The thrallband wears tabards with the Dark Tongue ritual language; its phonetic runes are the only manner in which the mysteries of Chaos can be truly expressed; it is the language of the daemons and Chaos creatures with the power of speech; the Thousand Sons strive to learn this arcane language for the conjuration of Chaos entities and to bargain with daemons when they are summoned
Add a photo to this gallery
Retrieved from "https://warhammer40k.fandom.com/wiki/Prism_of_Fate?oldid=321216"
Community content is available under CC-BY-SA unless otherwise noted.