A princeps (pl. princeps) is a senior officer of the Adeptus Mechanicus' Collegia Titanica who commands one of the towering Imperial or Chaos robotic combat walkers known as a Titan, and all of its crewmen -- moderati, Tech-priests and servitors -- are subordinate to them.

Princeps are all people of exceptional willpower, which is required to enter a mind-link with a Titan and maintain their sanity intact amidst the roaring spirit of destruction housed within the Titan's adamantium hull.

Although they belong to the separate military hierarchy of their Titan Legion and the Collegia Titanica, the princeps are still part of the Cult Mechanicus, and as such defer to the orders of powerful Adeptus Mechanicus magi, who command the might of the Titan Legions and are able to issue them direct orders and decide their assignments.

The princeps exerts command over his war engine by the means of a Mind Impulse Unit -- a technologically complex neural input device which allows for a cybernetic connection between the Human mind and a Titan's Machine Spirit (artificial intelligence), and the ability to impose his or her will upon it.

To establish the link between the Machine Spirit and the Human mind requires that the princeps submit to extensive cybernetic augmentation of his or her central nervous system, either by accepting the implantation of several cybernetic implants at the back of the neck and skull, a series of implants in the spine which enable the linking of the MIU to the spinal cord or even undergoing entombment in an amniotic tank with large parts of the body rewired to accommodate cybernetic interaction with the Titan.

The process of linking the Human mind to a god-machine is very difficult and dangerous, as a Titan is possessed of a ferociously potent Machine Spirit; one that is unlike any other, harbouring its own savage and instinctive intelligence. The princeps must break the machine's opposition and bind it to their will -- a feat requiring enormous willpower.

Because of this, princeps are rare individuals, and one of the tasks the Collegia Titanica carries out is to discover them wherever they can be found and train them to command the colossal war engines. Whilst normally the Adeptus Mechanicus searches for its personnel within the hierarchy of the Cult Mechanicus, the sheer rarity of such individuals requires the Mechanicus to search in the broader populace of the Imperium.

Barely one in ten million meet the necessary criteria and neural profile to serve as a princeps, and even fewer of this number make it through the training to finally command a god-engine. Because of this reality, princeps are immensely valuable individuals, and their home Forge World will spare no effort to recover them should they go missing in action, and if the slimmest chance exists that they are still alive.

There are two ways in which one can become a princeps -- undergoing training in Collegia Titanica academies, as mentioned above, or advancing from the rank of a moderatus to a full princepture, which is usually the command of a Warhound-class Scout Titan.

When the princeps is linked to a Titan's MIU, they feel the Titan's body as if it was their own -- their hands become weapon arms, their senses are turned into powerful auspexes and their skin becomes the thick adamantium hull -- an experience of supremacy and escape from Human frailty that addicts every princeps to his or her link with a Titan.

The princeps is then able to command the Titan intuitively -- they merely need to think of undertaking an action and the machine complies. During this operation, the princeps does not lose consciousness of his own body, and is able to simultaneously move and act as normal within the Titan's cockpit.

Relationship with the Machine Spirit

When a princeps first links with a new Titan, they must first break its resistance and force it to acknowledge them as its new master. Once that is done, however, the Machine Spirit's (artificial intelligence) resistance does not cease, and each re-connection is painful and mentally taxing for the princeps.

Being linked to a Titan will, either through the sheer mental strain of connecting to and becoming a being that dwarfs a Human in nearly every respect, or through the actual patient endeavour of the Titan's Machine Spirit, eventually result in the princeps losing sanity, being broken by the Titan, or being completely overwhelmed by the domineering Machine Spirit, lost in the machine's generated mental landscape or "manifold." At this point, disconnecting the princeps from the Mind Impulse Unit will result in certain death.

There is also a perverse effect to the mind-link: it is highly addictive to the Human mind. From the moment they manage to dominate his Titan's Machine Spirit, the princeps will actively crave being linked to their god-engine, for the feeling of becoming a godlike machine of destruction is impossibly intense, and living as a mere Human eventually becomes intolerable for some princeps.

Alas, this withdrawal also accelerates the princeps' descent into madness, straining their mind when they are not linked to their mighty war machine. If a princeps does not fall in battle, they will ultimately fall to the Machine Spirit of their Titan when their will finally snaps.

Being linked to the Titan's Mind Impulse Unit is a considerable effort in itself, and controlling the war machine's systems precisely is difficult. Most princeps are incapable of controlling all of a Titan's functions simultaneously due to the sheer, unbearable mental tumult it inflicts, and those who do will only do so for short periods of time.

For this reason, princeps are assisted in operating these towering war machines by junior Collegia Titanica officers called moderati -- whose role is to operate some of the Titan's systems in their commander's stead -- lessening the mental strain placed on the princeps and allowing for the efficient handling of the machine.

The mind-link is a very intimate and immersive connection, causing the princeps and the Titan to leave an imprint in each other's consciousness and grow increasingly alike over time. The Titan's Machine Spirit will learn from its princeps and from the battles they take part in, storing the knowledge and making it available at all times and to any princeps that will command the war machine in the future.

The princeps on the other hand, will, with time, begin to show traits of character akin to those of his or her war engine. The nature of the Machine Spirits varies between individual Titans, however war engines of the same class will be similar.

Thus, the commanders of Warhound-class Scout Titans are known to be bellicose and belligerent, and sometimes loners, though the latter may be due to their generally solitary assignments as scouts, while the princeps of other classes of god-engines are more cool-headed and better capable of cooperation as part of a larger force.

Beyond their command of an individual Titan, princeps are accorded different ranks within their Titan Legion, status which is usually based upon both their length of service as a princeps and the type of Titan that they command. More senior princeps usually command the more powerful classes of Titan.

The various ranks accorded to princeps tend to differ from Legio to Legio, wholly dependent upon that Titan Order's culture and the traditions of the variant of the Cult Mechanicus that rules its home Forge World.

The ranks presented below represent some of this diversity in titles, and they have been placed in relative order of seniority, from highest to lowest. Not all of these princeps ranks are present in every Titan Legion, and some of them may simply be alternative names for the same ranks present in more traditional Legios.

During the Horus Heresy, half of the Titan Legions declared support for the Warmaster Horus, and since those ancient times, the fickle blessings of the Ruinous Powers have warped many of them.

Although some of the Traitor princeps have remained largely unchanged, and are presumed to operate their Chaos Titans as described above, the rest have become hideously disfigured and physically merged with the corrupted war machines they command, linked with them not only in mind, but in flesh as well.

Princeps and moderati in a Reaver-class Titan's cockpit. 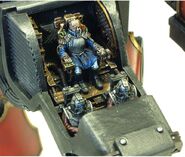 Princeps and moderati in a Warhound-class Titan's cockpit.

Chaos princeps and moderati merged with their Titan.
Español
Community content is available under CC-BY-SA unless otherwise noted.
Advertisement