"Make the Predator's virtues your own. Let your resolve become as impervious as the Predator's armoured hull, and let your rage strike with the righteous fury of its guns. As it crushes the foe beneath its remorseless advance, so shall you smite the traitor and alien without hesitation or regret. Know that to take the field alongside a Predator is to fight as the side of one of Mankind's most honoured guardians. To strive with less than your all beneath its iron gaze is to dishonour yourself and your battle-brothers before one of Mankind's greatest heroes."


—From the teachings of Roboute Guilliman, as laid down in the Apocrypha of Skaros

The Predator Destructor, usually referred to simply as the Predator, is the most common main battle tank employed by the Space Marines of the Imperium of Man and the Traitor Legions of the Chaos Space Marines. It is a more heavily armed and armoured version of the Rhino armoured personnel carrier.

The Predator Destructor is the most common variant of the Predator used by the Space Marines, and its long-barreled Syrtis Pattern Autocannon main armament, also known as a Predator Cannon, makes it most effective in an anti-infantry role.

All Rhino and Predator variants are based off of designs originally created during the Age of Technology, using Standard Template Construct (STC) database designs. The tanks can be constructed on Forge Worlds of the Adeptus Mechanicus or in a Space Marine Chapter's own forges, and afterwards they are sent to the Chapter's Armoury until they are needed.

A Chapter will usually maintain around 20 to 30 Predators of all types at a time. The Master of the Forge is responsible for all the vehicles of a Chapter, and upon request will issue these vehicles where and to whom they are needed.

From that point onwards, the vehicle is as much a part of the Chapter as the Space Marines themselves, and over the years its many deeds and victories will be celebrated as greatly as the Chapter's flesh and blood heroes.

The Predator Destructor, and the other Predator variants, first saw service during the Age of Technology where they served as the main battle tank of all of Mankind's forces. The Predator variant of the Rhino was first developed when Humanity encountered a violent and warlike breed of xenos, who would later be identified as the Orks.

The forces of Mankind were having great difficulty combatting the Ork's reckless attacks and headlong charges, and thus the Predator main battle tank was developed with thick armour and powerful weapons that allowed it to resist the attacks of most Ork weapons.

The original Predator designs were constructed with a small amount of troop-carrying capacity, but during the years of the Emperor's Great Crusade in the late 30th and early 31st Millennium this transport capacity was gradually replaced with more storage space for ammunition, especially if the Predator was equipped with sponson-mounted weapons.

This practise eventually became the standard and all Predators are equipped with sponson-mounted weapons at present.

The Predator tank features a special armoured chassis consisting of three different layers of protection. The inner layer provides the main defence for the vehicle and is constructed of bonded ceramite and adamantium alloys which provides protection that is over five times greater than conventional steel, yet is much lighter.

The second, centre layer is made of reinforcing Thermoplas containing a sub-dermal energy dissipation fibre mesh which protects against extremes of heat, cold, and radioactivity.

The third, outer layer consists of a non-magnetic acrylic identification sheath that helps the vehicle keep hidden from enemy scanners. Like all variants of the Rhino armoured personnel carrier, the Predator is capable of crossing deep water, but is not truly amphibious.

The Mars Pattern Mark IVb Predator Destructor is the most common of all the Predator types in use by the Adeptus Astartes today. The Destructor Pattern is armed with a turret-mounted Syrtis Pattern Autocannon, featuring an automated ammunition feeder, muzzle flash suppressor, and discharge extractor.

The weapon is slave-linked to a multi-spectral remote targeting surveyor and accuracy talisman that is controlled by the vehicle's commander, who is also the vehicle's gunner.

The sponson-mounted weapons are controlled remotely by the tank commander from the turret using a multi-spectral targeting surveyor that is protected from enemy fire by an armoured cowling. The sponson-mounts are able to be equipped with a variety of weapons, with Heavy Bolters and Lascannons being the most common.

All variants of the Predator can also be outfitted with a Dozer Blade, Extra Armour Plating, a Hunter-Killer Missile Launcher, improved communications equipment, a Pintle-mounted Storm Bolter, a Searchlight, and Smoke Launchers.

A Predator Destructor may take the following pintle-mounted weapons:

A Predator Destructor may also be armed with the following sets of sponson weapons, two weapons per set:

Predator Destructor Battle Tanks may also have a variety of vehicle equipment such as:

The following is a list of all known Adeptus Astartes formations that include the Predator tank:

There is one basic Predator Destructor variant design in use by the Space Marines, the Predator Annihilator.

The Predator Destructor tank has been the iron fist of the Traitor Legions since the days of the Horus Heresy, and it is the most common Predator variant used by the Chaos Space Marines.

The forces of Chaos have used Predator tanks in every conceivable theatre of war, from the civil wars that broke out between the Traitor Legions following the attempted cloning of Horus to the Black Crusades of Abaddon the Despoiler.

The Predator is used by all of the Traitor Legions, and all Renegade Space Marine Chapters that have turned against the Imperium. There are rumours of Predator Tanks within the arsenals of the Forces of Chaos that are controlled by the daemonic entities of the Warp itself, and thus lack a crew. These tanks are marked with the fell iconography of the Chaos Gods, and feature special weapons such as toxic sprayers and Sonic Weapons.

The Predator Destructor is more common amongst the ancient Traitor Legions than it is in the newer Renegade Chaos Space Marine forces that have defected from the Imperium in later times. There are many Predators being produced every day within the Eye of Terror on Chaos War Worlds and corrupted Dark Mechanicus Forge Worlds. Many smaller Chaos Space Marine warbands will scour battlefields in order to find and recover battlefield wreckage, and thus are able to add to the number of Predators and other vehicles they have at their service.

The Forces of Chaos deeply enjoy looting and corrupting Imperial vehicles, and since Predators are easy to repair, they are favoured prizes. The Predators under the control of Chaos Space Marine warbands are usually armed with either the standard Predator Autocannon or a set of twin-linked Lascannons. They can also be armed with pintle-mounted twin-linked Bolters (including Combi-Bolters) or other Combi-Weapons, and sponson-mounted Heavy Bolters or Lascannons.

Predators in use by Chaos and Renegade Astartes warbands that have recently betrayed the Imperium, or recently captured Imperial Predators, may be armed instead with a Storm Bolter or even a Hunter-Killer Missile Launcher. They can also be armed with a Havoc Missile Launcher, an ancient weapon system that has long fallen out of use in the Imperium. Chaos Predators can also be equipped with destroyer blades, Dirge Casters, dozer blades, extra armour plating, Chaos Icons or Marks, or Warpflame Gargoyles.

The main battle tank of the ancient Legiones Astartes, the Predator is such a versatile war machine that it can thrive in almost any theatre of war. It can be fitted with different weapon loadouts, allowing for anti-armour operations, anti-infantry firepower, or a mixed role depending on the enemy force's disposition. By sacrificing all troop-carrying capacity, the frontal chassis of the Predator can be reinforced, giving it far greater resilience than its personnel-carrier counterpart.

In a typical assault, Chaos Predators are used to provide fast-moving fire support. Capable of laying down punishingly accurate salvoes of firepower, the main battle tank is used to eliminate enemy armour, pave the way for an infantry assault, or throw back enemy squads that attempt to counterattack. When organised into squadrons, these tanks can change the course of a battle with a coordinated bombardment.

Frequently, the Predators used by the Chaos Space Marines have been in active service for longer than those who march alongside them. They have become embellished with horrific decorations, ragged pennants, leering gargoyles, beast-headed gun muzzles and icons of Chaos, making them as much a statement of their owners' hatred of the Imperium as weapons of war. 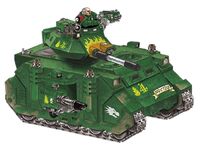 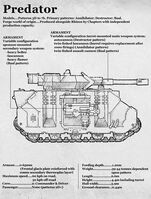