"Offer the incantation of activation, speak forth the litany of retribution and deliver unto the enemy the wrath of the Omnissiah."

The Praetors of Orpheus is a Loyalist Space Marines Chapter and a Second Founding or "Primogenitor" Successor Chapter of the Ultramarines. The Praetors of Orpheus' understanding of Imperial science and technology is second only to that of the Tech-priests of the Adeptus Mechanicus itself.

Many believe that the two organisations are tied by more than shared service in the Emperor's name and that the Praetors have shared personnel and goals with the Mechanicus in the past.

The Praetors of Orpheus is a Second Founding Successor Chapter of the Ultramarines and is therefore considered one of their honoured Primogenitors. The Praetors maintain their fortress-monastery on the world of Orpheus Prime, within a vast subterranean complex called the Labyrinthe of Orphia. This Chapter is famous for its disciplined approach to the Codex Astartes.

This occasionally causes the Chapter to offend its allies, but also means that, on the battlefield, the Praetors operate like a perfectly calibrated engine of war. With the resurrection of their Primarch Roboute Guilliman in 999.M41 and his recent revisions to the Codex, these changes have been rapidly adapted by the Chapter, whose inflexible adherence to the word of law continues unabated.

The Praetors of Orpheus are famous for their highly disciplined approach for executing the prescriptions of the Codex Astartes that is, if anything, too inflexible. The Codex is their guide in all things, but the Chapter's Battle-Brothers are prone to interpreting passages from the tome in too literal a way.

The Praetors of Orpheus wear predominantly white Power Armour. The Aquila or Imperialis on the chest guard, as well as the power pack, shoulder plate trim and bolter casings are sky blue.

A High Gothic numeral, indicating squad number, is stenciled in the centre of it.

A white High Gothic numeral is stenciled upon the left knee plate, identifying the company number. Sometimes campaign badges are indicated on a Battle-Brother's greaves.

The Praetors of Orpheus' Chapter badge is a sky blue shield with a yellow sunburst in the centre, with the exception of the top left quarter which is white with a sky blue version of the Ultramarines icon, an upside down Greek letter Omega. This shield is centred on a field of white. 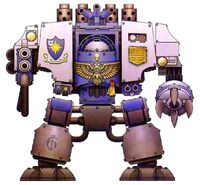