The Praetorian Guard regiments of the Astra Militarum are raised from the world of Praetoria. Praetoria is a heavily populated Hive World that lies in a star system close to the Imperial segmentum naval base at Bakka in the Segmentum Tempestus.

The overpopulated hive cities of Praetoria are renowned for their squalor and degradation, and produce some of the toughest gangers on any of the Hive Worlds in the Imperium.

This vast population works as little more than slave-labour in the huge manufactoria complexes of Praetoria, producing the goods that have made the planet (and its rulers) among the richest in the Imperium of Man, with a huge fleet of merchant voidcraft that trade all over the segmentum and beyond.

Astra Militarum regiments raised on Praetoria are renowned for their iron discipline and bravery, even in the face of the most overwhelming odds. They detest slovenliness and disorder and even in the midst of the fiercest battle will ensure their ranks are correctly dressed in parade ground fashion and have their uniforms smartly fastened.

The planetary lords of Praetoria hold it is only through fearsome training and draconian punishments for the most minor infringements that the hive-toughened inhabitants of their planet can be made to follow orders and do as they are told as part of a highly-regimented military unit.

Whatever one's views on the training methods used, they seem to work, producing troops that are as ferocious on the attack as they are determined to hold the line in defence.

The Praetorian Guard's regiments fight in a similar way to the regiments of the Mordian Iron Guard, presenting perfectly formed firing lines and unleashing precisely timed volleys of las-fire, despite the chaos of battle around them.

The Praetorian Guard are known for their incredible discipline, and will not break from the line under almost any conditions, displaying a fortitude that is near superhuman when compared to other Imperial Guard regiments.

The following is a list of the wargear traditionally available to a standard Praetorian Guard trooper:

The Praetorian Guard were created for the "Massacre At Big Toof River" Mega Display which appeared at UK Gamesday '97 in 1997. The original models were created by Michael and Alan Perry and were based on the Mordian Iron Guard. Extreme interest in the new regiment led Games Workshop to release a Limited Edition Box Set which was later followed by a release of the unit in blisters.

Like many older models, the Praetorian Guard have since been removed from both production and Games Workshop's mail order and online catalogues, but are still widely available on the internet through second-hand sources.

The Praetorians were reasonably popular, largely due to the highly distinctive look of their armies and the sharp contrast between them and the dark, gothic Imperium around them.

The Praetorian Guard's distinctive look is based on the uniforms worn by the infantry of the British Army who most famously fought in the Anglo-Zulu War of 1879.

The Praetorian regiment name is derived from the home planet of Praetoria, which is inspired by the South African city of a similar name: Pretoria.

This regiment's name is also obviously inspired by the Praetorian Guard which served as the personal bodyguard of the Roman emperors from the time Caesar Augustus formally established the Roman Empire in 27 B.C. until they were disbanded by Constantine I in 312 A.D. 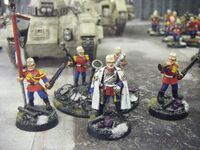 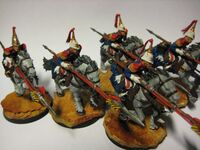 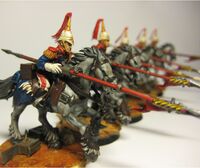 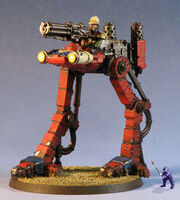 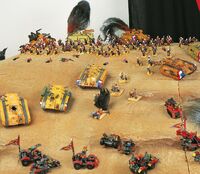 Praetorians during the Massacre at Big Toof River.

Praetorians in combat against the Orks.

Praetorians face the Necrons in battle.
Español
Community content is available under CC-BY-SA unless otherwise noted.