A Power Sword is a Power Weapon that has been shaped into a sword of varying lengths and designs crafted from one of any number of different materials, though usually Adamantium. When its power cell is activated, often by touching a control located on the hilt, the blade is sheathed in a lethal corona of disruptive energy. This energy field allows the blade to carve through flesh, bone and most forms of armour plate alike, making a Power Sword a highly effective Imperial close combat weapon. Power Swords are used by all members of the Imperial armed forces, including the troops of the Imperial Guard and the Space Marines of the Adeptus Astartes. Xenos races such as the Eldar, their evil kin the Dark Eldar, and the Necrons are also known to make use of such weapons.

Power Weapons have been a part of the Imperium at least since its inception, but their origins more than likely lie in the mysterious Dark Age of Technology. By the 41st Millennium, most power weapons are considered rare and greatly coveted personal close combat melee weapons used on the battlefields. Few members of the Adeptus Mechanicus retain the knowledge necessary to make these deadly weapons, and those that are in existence are often hundreds or even thousands of standard years old. Power swords are elite weapons and a sure sign of high status in the Imperium; many captains favour them as a prestige item to impress crewmen and enemies alike. Like a common sword, they allow the user greater attack options and defensive responses than many weapons. Entire specialised styles of combat have been designed around the expansive number of variants found across the galaxy and beyond. Power weapons require great investments of time and rare materials to produce. Therefore, power swords are typically reserved for ranking members of the Adeptus Astartes or powerful and influential members of the Imperium, such as Inquisitors, Commissars or ranking Imperial Guard officers. Elegant but effective, power swords allow the user greater attack options and defensive responses than many other varieties of power weapon. This efficient design makes them popular with officers regardless of whether they specialise in close combat or not.

Often the signature weapons of elite warriors, power swords are perhaps the most dangerous of melee weapons. In the hands of a skilled swordsman, they combine a deadly offence with a nearly impenetrable defence. They come in a variety of shapes and styles, and entire schools are devoted to their mastery. Like all power weapons, a power sword projects a disruptive energy field along the blade of the weapon, allowing it to slice armour or strike with explosive impact. In theory, any weapon can be upgraded to a power weapon given the necessary technology, though in practice there is a traditional array in use by the Adeptus Astartes. The sight of an angel of vengeance charging into battle is intimidating in its own right. When his weapon or fist itself suddenly flares to life in a halo of electricity, it becomes truly inspiring—or terrifying—depending on which side of the charge you are on. A power weapon can still be used as an ordinary weapon should its power source become inhibited or damaged.

A Frost Blade of the Space Wolves Chapter

An ancient modified Power Sword of the Salamanders Legion

A typical Munitorum pattern Power Sword, utilised by officers of the Imperial Guard

An ancient example of a Proteus Pattern Power Sword of the Word Bearers Legion. As a sign of their favour within the Word Bearers, individual warriors had their power swords engraved with one of the invocations from Kor Phaeron's and Erebus's many Chaotic scriptures. 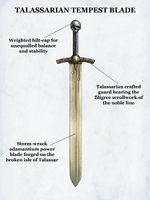 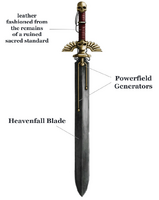 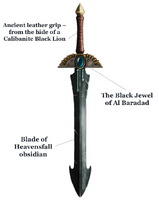 The Sword of Silence, wielded by Master Belial. This ancient sword is traditionally wielded by the Master of the elite Deathwing Company 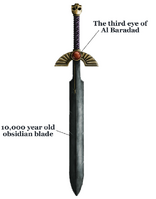 The Raven Sword, wieled by Master Sammael. This ancient sword is traditionally wielded by the Master of the Ravenwing Company.

The Sword of Asur, first of the Eldar Direswords

A Dark Eldar Klaive, favoured weapon of the Incubi

A Necron Hyperphase Sword
Add a photo to this gallery
Retrieved from "https://warhammer40k.fandom.com/wiki/Power_Sword?oldid=323389"
Community content is available under CC-BY-SA unless otherwise noted.