The Power Scythe is a two-handed melee Power Weapon once used by some of the Space Marine Legions that seemed to disappear from Imperial use after the early Great Crusade, as the Power Scythe never established itself as an accepted weapon amongst the majority of the Legiones Astartes and was finally discontinued by Departmento Munitorum edict in the 34th Millennium. It still remains popular with the Traitor Legions of Chaos and their human allies, however, specifically amongst those who serve the Plague Lord Nurgle. A Power Scythe has a further reach than many other similarly situated Power Weapons, and its long blade can cut a swathe of deadly energy, slaying several foes in one arc.

Mortarion, Primarch of the Death Guard wielding his deadly battle scythe, Silence during the Great Crusade; he is flanked by his mute-bodyguard, the Deathshroud

Mortarion, Daemon Primarch of Nurgle, wielding his daemonic Power Scythe, Silence, during the Battle of Terra 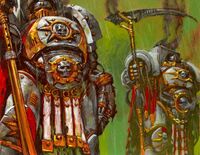 A pair of warriors of the Deathshroud, personal Honour Guard of Mortarion, wielding Power Scythes 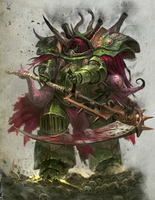 A corrupted Deathshroud Terminator, wielding his deadly Manreaper battle scythe against his foes 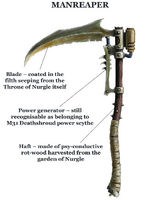 Manreaper, the daemonic Power Scythe wielded by Typhus, the Herald of Nurgle

An ancient Legiones Astartes Power Scythe
Add a photo to this gallery
Retrieved from "https://warhammer40k.fandom.com/wiki/Power_Scythe?oldid=322162"
Community content is available under CC-BY-SA unless otherwise noted.