The Power Klaw is a crude, over-sized, armoured gauntlet used by Ork warriors that generates an energy field around it, one that is capable of violently disrupting any solid matter it touches.

Similar to an Imperial Power Fist, this deadly close-combat weapon takes the form of a servo-motored claw, large even for an Ork, that ends in two or more snapping blades that spark with discharges from an unstable disruptive energy field.

Though more primitive than its Imperial counterpart, the huge hydraulic shears of an Ork Power Klaw are capable of rending and crushing even the toughest foes and even armoured vehicles.

Ork combat walkers like Gargants are fitted with Power Klaws that befit their greater size, and can rip through anything foolish enough to stand in the pilot's way.

Within Ork society, a Power Klaw is a symbol of status as much as a weapon. Orks often amputate their own arms and graft a Power Klaw to the stump, taking the weapon as an augmetic implant.

Uniquely, Commissar Sebastian Yarrick of the Astra Militarum is famous for his Power Klaw, which he tore from a defeated Ork Warboss and adapted for his own use, as much a weapon as a symbol of his prowess in the never-ending war of Humanity against the Orks. 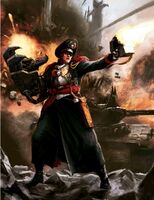