A Power Fist (also known as a Power Glove) is essentially an over-sized, armoured gauntlet that generates an energy field around it that disrupts any solid matter it touches. It is a favoured close combat weapon for the warriors of the Imperium of Man, as well as the Forces of Chaos (particularly the Chaos Space Marines). It is an iconic weapon of the Loyalist Space Marines. It is large and slow in combat, and so the bearer must be willing to risk the blows of his enemy before he can strike back. The benefits of the Power Fist are that it increases the user's strength, much as Power Armour does due to the power provided by the mechanical servos that allow the Power Fist to move as its user desires. The disadvantages of its unwieldy nature are often well worth the limitations, however, as as the combination of the disruptive power field and sheer physical strength afforded by a Power Fist allows a Space Marine to pulverize and tear apart armour plate from the most well-protected of vehicles, and to wound and kill even colossal monstrous creatures in close combat; its brutal effects against more mundane foes goes without saying. It is most commonly found fitted to Space Marine Tactical Dreadnought (Terminator) Armour.

A variant of the Power Fist is the Chainfist, which is similar to a Power Fist but has a miniature chainsaw blade attached. A popular choice for weapons used with a Power Fist are the combat shield and the bolt pistol or just a Storm Shield, to ensure that the combatant survives long enough to use it.

As with much of the armament used by the Space Marines loyal to the Emperor, warriors from the Chaos Space Marines armed with Power Fists are not an uncommon sight.

Some xenos forces are also known to have analogous wargear, and among these are the Eldar. Meanwhile, the Orks use a similar (though much more crude) device known as a Power Klaw which is a servo-motored claw, large even for an Ork, with fearsome bladed fingers and sparking with discharges from an unstable disruptive field. Though more primitive in appearance, it is no less potent and is fully capable of dismembering infantry and tearing apart armoured vehicles. Uniquely, Commissar Yarrick of the Imperial Guard is famous for his Power Klaw, which he tore from a defeated Ork Warboss and adapted for his own use, as much a weapon as a symbol of his prowess in the never-ending war against the Orks. 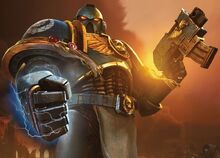 An Ultramarines Astartes armed with Power Fist and Bolt Pistol 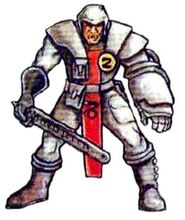 An Imperial Army trooper armed with a Power Fist 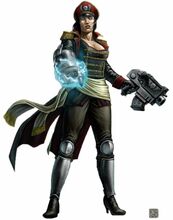 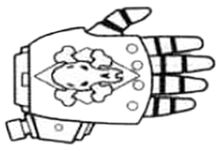 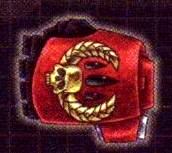 Archaic pattern of Power Fist
Add a photo to this gallery
Retrieved from "https://warhammer40k.fandom.com/wiki/Power_Fist?oldid=155416"
Community content is available under CC-BY-SA unless otherwise noted.