A Power Fist (also known as a Power Glove) is essentially an over-sized, armoured gauntlet that generates an energy field around it, one that is capable of violently disrupting any solid matter it touches. It is a favoured close combat weapon for many warriors of the Imperium of Man, as well as the forces of Chaos (particularly the Chaos Space Marines). It is especially an iconic weapon of the Space Marines.

A Power Fist is large and slow in combat, and so the bearer must be willing to risk the blows of his enemy before he can strike back. However, a Power Fist vastly augments a user's strength, much as power armour does due to the power provided its mechanical servos.

The disadvantages of its unwieldy nature are often well worth the limitations, as the combination of the disruptive power field and sheer physical strength afforded by a Power Fist allows a Space Marine to pulverize and tear apart armour plate from even the most well-protected of vehicles, and to wound and kill colossal monstrous creatures in close combat; its brutal effects against more mundane foes goes without saying. It is most commonly found fitted to Space Marine Tactical Dreadnought (Terminator) Armour.

A variant of the Power Fist is the chainfist, which is similar to a Power Fist but has a miniature chainsaw blade attached.

Other Imperial forces also make use of the Power Fist, although less extensively than the Space Marines. The Sisters of Battle sometimes wield Power Fists, as they too are equipped with power armour. Senior officers and lord commissars of the Astra Militarum may also make use of smaller-scaled versions of the Power Fist, although its use is uncommon as it requires the officer to equip themselves with a bulky exoskeletal frame, and such wargear is very rare in the arsenal of the Imperial Guard. As with much of the armament used by the Space Marines loyal to the Emperor, warriors from the Chaos Space Marines armed with Power Fists are not an uncommon sight.

Some xenos forces are also known to have analogous wargear, and among these are the Craftworld Aeldari.

Meanwhile, the Orks use a similar (though much more crude) device known as a Power Klaw which is a servo-motored claw, large even for an Ork, with fearsome bladed fingers and sparking with discharges from an unstable disruptive field. Though more primitive in appearance, it is no less potent and is fully capable of dismembering infantry and tearing apart armoured vehicles.

Uniquely, Commissar Yarrick of the Astra Militarum is famous for his Ork Power Klaw, which he tore from a defeated Greenskin Warboss and adapted for his own use. It is now as much a weapon as a symbol of his prowess in the never-ending war of Humanity against the Orks.

The origins of Power Fists most likely lay in the Age of Technology. By the late 30th Millennium, these deadly weapons were a valuable addition to the arsenal within the Legiones Astartes, and were utilised throughout the Great Crusade and the Horus Heresy by both Loyalist and Traitor forces.

In the 41st Millennium, this formidable close combat weapon is still utilised by the military forces of the Imperium. As is befitting for such a potent and fearsome weapon, use of the Power Fist is limited to such individuals as honoured Space Marine captains and Chapter Masters. Sometimes, a sergeant might be rewarded with carrying one of these mighty weapons into battle, blessed by its brutal might so that he might better vanquish the enemies of the God-Emperor.

As with many weapons of this ilk created by the Imperium, wealthy Astra Militarum officers, vain Imperial Commanders and stoic commissars carry lesser versions. However, when it comes to their efficacy, they are as a rusty knife to a well-honed blade.

Fixed to the mighty arm of a Space Marine, a Power Fist can punch through almost any defence, even hammering through the side of tanks to tear out the crew. Armed with a Power Fist, a battle-brother is deadly to anything on the battlefield, easily able to crush foes within his grip. Equally, fortifications are little defence against an assault from a Power Fist-armed Space Marine, the coruscating gauntlet able to peel back plasteel bulkheads and batter down ferrocrete bunkers.

The only drawback of a Power Fist, apart from the strength required to wield it, is that it remains a slow and prodigious weapon to use. As the disruption field pushes back against the air and the power armour struggles to bear the weight of the fist, its hydraulics whine and hiss. In the time it takes even a Space Marine to raise the weapon for a strike, an enemy with a blade can dart in and land a blow. In a whirling and chaotic melee, a Space Marine must endure dozens of cuts, slashes and thrusts as he methodically pulverises his foes with crippling punches and backhanded strikes.

It is perhaps due to the cumbersome and unwieldy nature of the Power Fist that the Adeptus Astartes are among the few warriors of the Imperium to use it in high numbers. The protection afforded by power armour and the genetically enhanced frame of a Space Marine means he is able to take the punishment before readying a killing blow.

Nethertheless, the speed of the weapon is balanced against the incredible damage it can cause, and many Space Marine commanders gladly accept the sacrifice of speed if it means they only need to strike once.

Symbol of the Space Marines

Crafted on Forge Worlds and in the depths of Space Marine fortress-monasteries, each Power Fist is unique to the Tech-priest or Techmarine who created it. Hours of painstaking work based on millennia-old templates and designs go into fashioning the weapons from the rare components required to grant the fist its singular strength. So difficult are some of the parts to produce, especially the shielded containment chambers of the power core and the web of field emitters arrayed across the fist's fingers, that they are often scavenged from older weapons.

Many rare and exquisite examples of the Power Fist exist within the ranks of the Adeptus Astartes, such as the paired weapons known as the Gauntlets of Ultramar worn by Marneus Calgar, Chapter Master of the Ultramarines. These ancient weapons served the Chapter Master during the Battle of Macragge, where they split the skulls and spines of countless Tyranid bio-horrors.

Pedro Kantor, Chapter Master of the Crimson Fists, also famously wields a Power Fist. Painted crimson as an icon of his Chapter, Kantor put this sacred weapon to terrible use during the Rynn's World campaign, where he crushed the invading Orks of WAAAGH! Snagrod.

A well-maintained Power Fist is a near-priceless weapon to its owner, carefully cared for and stored with the reverence reserved for a great treasure. This respect for the weapon goes beyond simple superstition and matters of honour, and has as much to do with the impressive combat capabilities the gauntlet possesses. A Space Marine is wise to respect his weapons, lest they fail him in battle -– this is especially true of one as deadly as the Power Fist.

A Power Fist is a formidable close combat weapon capable of pulverising armour, flesh and bone with horrific ease. Taking the form of a heavy servo-powered gauntlet, it is commonly worn as part of a suit of power armour, replacing the ceramite plates from forearm to fist. The real killing might of a Power Fist comes not from its piston-enhanced grip, though this alone could crush a man's helmet and the skull within, but rather the disruption field that surrounds it.

Backed by a battle-brother's strength, a Power Fist can sunder even the heaviest armour or rupture flesh as though bursting a bloody, overripe fruit. This field tears into matter at a molecular level and anything that remains for more than a moment within its grip is ripped apart in the most appalling fashion.

Keeping these superior energy fields charged requires heavy cables linked to the armour's power system. The generators are also rare and difficult to maintain, making such a weapon a sign of status, even within the Adeptus Astartes. 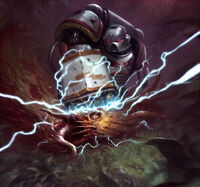 An Ultramarines Astartes armed with Power Fist and Bolt Pistol. 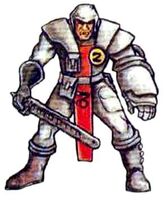 An Imperial Army trooper armed with a Power Fist. 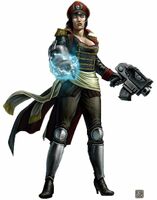 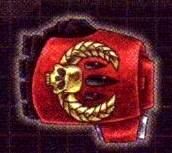