A Power Axe is a Power Weapon taking the form of a single or double-edged battle axe. Power Axes vary in length and design, and have been known to be crafted from one of any number of different materials, though usually Adamantium. As with all Power Weapons, when its power field is activated, usually by operating a control located on the hilt, the blade is sheathed in a lethal corona of disruptive energy. This energy field allows the blade to carve through flesh, bone and most forms of armour plate alike, making a Power Axe a highly effective close combat weapon.

The weight of a Power Axe allows for greater impact forces when striking compared to a Power Sword, but is consequently far less nimble in the hand. Their unwieldiness and inferior defensive capabilities are often mitigated by pairing them with a Combat Shield or other means of protection, allowing a warrior to stay his enemies' attacks until he is ready to strike a killing blow. In most cases, they have a reputation as a brutal and unsubtle weapon; the choice to employ one is often more personal than strategic.

Power Axes are most commonly found being utilised by the Space Marines of the Adeptus Astartes, typically by senior officers, Assault Squad Sergeants, or Vanguard Veterans. Ornately-designed Power Axes, replete with iconography of devotion to the Machine God, are also commonly associated with Techmarines and members of the Adeptus Mechanicus.

In battle, Power Axes can be used either in one hand to facilitate the wielding of another close combat weapon such as a Bolt Pistol or Combat Shield, or in two hands to bring its full devastating power to bear. The Forces of Chaos, and xenos races such as the Aeldari, are also known to make use of such weapons. 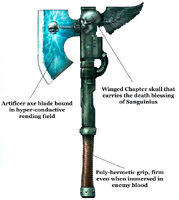 The infamous Axe Morkai, the ill-famed weapon of the Great Wolf Logan Grimnar, Chapter Master of the Space Wolves Chapter

A Frost Axe of the Space Wolves Chapter

Another example of a Hesperex Pattern, Chapter Subtype, Minotaurs Chapter

An Eldar Ghostaxe
Community content is available under CC-BY-SA unless otherwise noted.
Advertisement