"Ours is a solemn duty, though we perform it with fulsome glee. Grandfather Nurgle lavishes his generous bounty upon us, but so too does he hang a heavy weight of trust about our necks. Never must his seething children wither. Always must they multiply and thrive. Such is our most glorious calling, and no sacrifice is too great in its furtherance..."

A Plague Surgeon is a Chaos Space Marine specialist found exclusively within the ranks of the Death Guard Traitor Legion.

These sinister figures were once the Apothecaries of the XIV Legion, but since their damnation and transformation into followers of the Plague God Nurgle, they have become the exact opposite of all that they once held dear.

Instead of bringing healing, they bring only Empyric disease and death. With their tainted Narthecium and plague-ridden surgical instruments, they spread the various plagues of Nurgle to friend and foe alike.

Sinister, hooded figures, Plague Surgeons drift through the mayhem of battle like ghoulish spectres of death. They were once Death Guard Apothecaries who brought healing to those who could be saved, and absolution to those who could not. Damnation transformed their order, rendering them the dark antithesis of what they once were.

The unnatural resilience of Mortarion's sons leaves little call for conventional medicine. Flesh wounds seal up with bulbous flab and clotted pus, while any damage serious enough to lay one of the Death Guard low is usually so catastrophic that no amount of suturing or surgery can save them. Instead, the Plague Surgeons tend to the well-being of the diseases that their brothers carry within their rotting bodies.

Like proud fathers, the Plague Surgeons spare no effort in tending to all of Nurgle's children. Their bodies are incubators for every form of parasite and phage, their flesh and blood offered willingly as living nurseries for these ghastly offspring.

As a result, the very touch of a Plague Surgeon is virulently infectious, while every breath they exhale teems with spores and daemon motes. The miasma that seeps from their censers and the filth that drips from their weapons and surgical instruments only adds to this effect. Any foe foolish enough to engage a Plague Surgeon in combat will soon be crawling with Empyric disease.

Plague Surgeons bolster the potency of Nurgle's plagues in friend and foe alike. The tainted Narthecium-like instruments upon their arms contain booster-vials and macro-stimulants for plagues both natural and Warp-spawned, imbuing Nurgle's servants with new strength even as they worsen the enemy's sickness to lethal degrees.

Plague Surgeons also have another role upon the field of battle, one that has earned them the unending hatred of the Emperor's Space Marines. Their surgical tools still include ancient, rust-furred Reductors capable of cracking open the body of an Adeptus Astartes and extracting his gene-seed.

While Plague Surgeons gather the mutated Progenoid Glands of their Death Guard brethren wherever they can -- despite many having rotted to an untenable degree -- they take a macabre glee in falling upon dead or dying Loyalists, ripping the healthy Progenoid Glands from their victims and spiriting them away from the battlefield. Some of this gene-seed is used in the creation of new Death Guard Heretic Astartes, while the fate of the rest is best left unspoken.

"Rejoice! We bring you the bountiful gifts of Nurgle, feculent blessings of which you are singularly unworthy. Yet our master is generous and forgiving, and so for all your lack of gratitude, he will grace you with them nonetheless. Breathe deep, you throne-worshipping worms. Feel the power of a true god..." 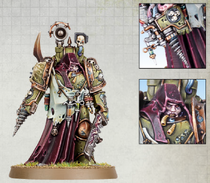 A Plague Surgeon outfitted with tainted Narthecium and Balesword
Español
Community content is available under CC-BY-SA unless otherwise noted.
Advertisement