With the success enjoyed by Piranha squadrons during both the Taros Campaign and other conflicts across the expanding Tau Empire, it was inevitable that other vehicles based on the design would soon emerge from various Tau Septs. The TX-42 is the newest incarnation of the original Piranha, intended to fulfil the role of a heavy gunship designed for frontline operations in support of Tau armoured units instead of a lightly armed reconnaissance craft. Compared to its progenitor, the TX-42 carries a much heavier weapons load, including twin-linked Rail Rifles, twin-linked Missile Pods, twin-linked Fusion Blasters or twin-linked Plasma Rifles. TX-42s retain the ability to carry a small number of Seeker Missiles into combat, which can then be launched by other Tau Empire units using the Marker Light network to direct their weapons fire. 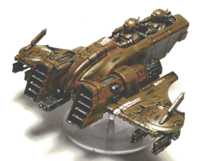 A Piranha
Add a photo to this gallery
Retrieved from "https://warhammer40k.fandom.com/wiki/Piranha?oldid=322183"
Community content is available under CC-BY-SA unless otherwise noted.