The Phased Plasma-fusil is a type of Plasma Weapon that was once a common sight in the armouries of the Imperium of Man during the Great Crusade and Horus Heresy eras, but are now all but unknown on the battlefields of the 41st Millennium.

The Phased Plasma-fusil was more reliable, although still somewhat unstable and hazardous to its wielder, than the current era's Plasma Guns, as humanity had a far better understanding of plasma technology at the dawn of the Imperium.

Plasma Weapons make use of hydrogen fuel suspended in a liquid state in either fuel flasks or backpack containers. As the fuel is fed into the miniature fusion core inside the weapon, the hydrogen energises into the plasma state of matter which is held in the core by powerful magnetic containment fields.

When fired, the fields dilate open and the plasma is ejected via a linear magnetic accelerator as a bolt of super-heated matter akin to a solar flare in appearance and temperature.

The Phased Plasma-fusil was carried into combat by the Thallaxii, heavily augmented cyborg shock-troops utilised by the Mechanicum's Ordo Reductor, and by their Questoris Knight Magaeras and Minotaur artillery tanks. A magos, such as a Magos Prime, Magos Dominus or Magos Reductor could also choose to carry one into combat.

These weapons could also be found in the hands of the Servo-automata that accompanied the Enginseer Auxillia into combat or in use by the feared Myrmidon Secutors.

When compared to the current Plasma Guns such as those carried by the Adeptus Astartes, the Phased Plasma-fusil featured a longer range and was less likely to overheat and cause injury to its user, albeit at the cost of a slightly reduced overall damage output.

Those Phased Plasma-fusil weapon that remain in service to the Dark Mechanicum of the 41st Millennium are now known as "Ectoplasma-fusil Weapons." 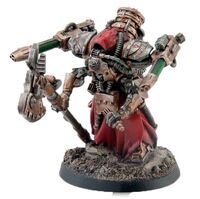