"Only in death, their's or the enemy's, can forgiveness finally be earned."

A Penitent Engine is a large, bipedal combat walker used by the Ecclesiarchy as a form of punishment for those Heretics who have repented their sins against the God-Emperor. Penitent Engines are also used by the Orders Militant of the Adepta Sororitas as heavy infantry fire support in the same way that the Space Marine Chapters use their Dreadnoughts.

To be a pilot of a Penitent Engine is to have committed a terrible crime, one so heinous that punishment such as imprisonment, exile, Arco-flagellation or even execution is deemed too lenient. The repentant Heretic is hard-wired into the front of the war engine, and unlike Space Marine Dreadnoughts, which are fully enclosed, the penitent sinner is fully exposed to enemy attack, relying only upon the Emperor's judgement to keep them safe or take their life.

Many of the souls that are punished in this way may have once been members of the Ecclesiarchy; Imperial Priests who have fallen from the Emperor's grace, or even Battle-Sisters who have failed in their faith or through their mistakes have caused the death of others.

The penitent is hard-wired to the front of the combat walker with a multitude of fibre optic neural connectors, and chemical injectors are implanted into the pilot's brain and spine. The war engine is driven by the pilot's frantic need for forgiveness, and will charge towards the enemy heedless of the danger, as only in a heroic death against the Emperor's enemies does the penitent believe that true forgiveness can be earned.

The pilot is filled with numerous stimulants and other drugs that ensure that he or she is able to survive multiple injuries while still feeling the pain of everything that the enemy unleashes upon them. These stimulants are usually powerful enough to keep the penitent alive long enough for them to atone for their sins by frantically killing many foes.

Penitent Engines will often charge into battle alongside the ranks of the Orders Militant, as the Sisters of Battle consider it their sacred duty to witness these machines in the flames of battle, watching the actions of the fallen as they atone for their sins against Mankind and the God-Emperor.

Penitent Engines are armed with only devastatingly effective close-combat weapons, as the pilot is in too frantic a mental state to take his or her time to aim long-range weaponry effectively.

All Penitent Engines are armed with Dreadnought-class close-combat weapons, which usually include large, circulating power saws, Chainfists, or other Power Blades on each of the walker's arms.

The Adeptus Mechanicus has not made the technical specifications for the Penitent Engine publicly available. 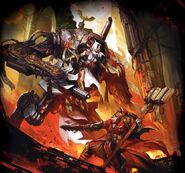 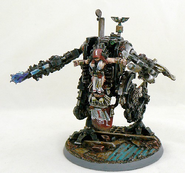 A Penitent Engine with a repentant female sinner as its pilot.

A Penitent Engine fighting against a Chaos Defiler.

A Penitent Engine armed with a Power Blade, two Heavy Flamers and a Chainfist. 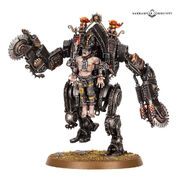 A Penitent Engine prepared to meet the foe, armed with two circulating power saws and 2 twin-linked Flamers.
Add a photo to this gallery
Retrieved from "https://warhammer40k.fandom.com/wiki/Penitent_Engine?oldid=354350"
Community content is available under CC-BY-SA unless otherwise noted.