They are renowned for their exceptional bladework and marksmanship, to the point where their Veterans are often seconded to the Honour Guards of other Ultramarines successors and notable Imperial worthies.

The Patriarchs have made names for themselves amidst the ranks of the Deathwatch and have even been seconded to the elite Victrix Guard of the Ultramarines since the resurrection of their Primarch Roboute Guilliman.

Founded in the dark days following the Horus Heresy, the Patriarchs of Ulixis is a Primogenitor or "first-born" Chapter, created during the Second Founding from the gene-seed of the Ultramarines Legion. The Patriarchs especially prize the skilled and selfless defence of those they are assigned to protect.

Like their forebears, the Patriarchs of Ulixis have continued to proudly carry on the legacy of Guilliman and their traditions of martial prowess.

The Patriarchs of Ulixis' Chapter colours are red, including the shoulder guards, arms, helm and legs, while the rest of the power armour -- backpack, torso and groin -- is bone, a hallmark of this Chapter.

A sergeant's helm is also bone.

A white Low Gothic numeral, which indicates squad number, is stenciled on the squad specialty symbol.

The Patriarch of Ulixis' Chapter badge is a large white skull with a black Ultramarines' symbol, the Greek letter Omega, in the centre of its forehead. This is centred on a field of red. 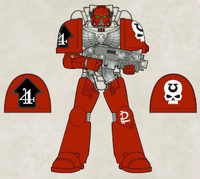 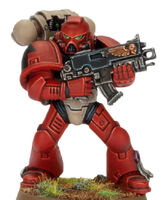 Patriarchs of Ulixis Tactical Marine
Add a photo to this gallery
Retrieved from "https://warhammer40k.fandom.com/wiki/Patriarchs_of_Ulixis?oldid=374360"
Community content is available under CC-BY-SA unless otherwise noted.