Pathfinders are the main scouting infantry forces for the Fire Caste of the Tau Empire. As light reconnaissance units, Pathfinder Teams are the eyes and ears of their Tau Commander in a way no Tau Drone can yet emulate. A Pathfinder's role is not to engage the enemy, but instead to maximise the efficiency of the rest of their Hunter Cadre with their Marker Lights which designate priority enemy targets and guide the fire of their comrades. Pathfinders often operate ahead of the main body of Tau forces and close with the foe to accurately scout the enemy. In such a position, a Pathfinder's life is always under threat. For this reason and more, Pathfinders are held in high regard by the member of every Tau caste.

Compared to standard Fire Warriors, Tau Pathfinders have a more specialised role on the battlefield and possess incredible long-range reconnaissance capabilities. They are the eyes and ears of a Hunter Cadre, although they coordinate closely with other Tau formations as well. Pathfinders are the undisputed masters of battlefield positioning, possessed of limitless patience and a proud determination to choose the most valuable targets for their fellows to destroy. Pathfinders stand at the front to guide their comrades' aim, and not to win the battle themselves. In other words, an efficient Pathfinder Team helps its fellow Fire Warrior teams operate at their peak efficiency. This concept of working for the Greater Good (Tau'va in the Tau Lexicon) at the expense of personal glory is the guiding light of all Tau activity. Their embodiment of this basic philosophy makes Pathfinders highly popular with their fellow Tau warriors and earns them enormous respect in Tau society.

Every member of the team also carries a Marker Light, a laser designator device attached to his weapon that projects an all-but-invisible, highly-focused beam of coherent light at a potential target. Every Marker Light is networked to support weapon platforms and other units on a Tau battle network, and transmits precise targeting information in order to guide the fire of such units and increase their accuracy. When used to guide the armour-piercing Seeker Missiles carried as additional weapons on many Tau main battle tanks, aircraft, spacecraft or fixed installations, Pathfinders are able to remain hidden as they call in devastatingly powerful and unerringly accurate missile artillery fire onto the target. Many Imperial troops have come to fear the small, red dot of light that appears on the body of those about to be slain, and Imperial troops who fought in the Damocles Gulf Crusade described the signature of the barely visible Marker Light beams as the "Valkyrie's Mark", because those it chose were soon numbered among the dead. Often the first indication of imminent contact with Pathfinders is the telltale red dot of a Marker Light appearing upon an enemy warrior's armour, followed an instant later by a barrage of Seeker Missiles. On many occasions, Pathfinder Teams hold back while observing an infiltrating force, only calling in fire when their enemy is too far forward to extricate safely.

While every Tau Sept has tales of crafty Pathfinders escaping from impossible odds, even the best-laid extraction plans can fall through. Trading lives for ground is anathema to the Tau, and the warriors of the Fire Caste are trained to retreat and fight another day. All Tau warriors are willing to lay down their lives for the Greater Good, but Pathfinders find self-sacrifice called for more often than all other Cadre teams combined. Holding a Marker Light on a distant enemy while your own position is being overrun is a selfless act, but Pathfinders epitomise the Greater Good, and by their actions, many battles are won. During the early days of the Great War of Confederation, some Septs reported Pathfinder casualty rates at 84% or higher. Despite this, or perhaps because of it, the Fire Caste academies are inundated by volunteers wishing to be Pathfinders, eager to do their utmost for the Greater Good.

A typical Tau Pathfinder squad will number from four to ten Shas'la members, usually led by a Shas'ui veteran and bonded together by the ritual of Ta'lissera. A typical Tau Pathfinder is equipped with a Pulse Carine for use as his primary weapon, along with an attached underslung Photon Grenade Launcher and Marker Light. Photon Grenades are also issued as standard weapons to Tau Pathfinders, though some teams have been known to carry EMP Grenades for use against vehicle threats. All Tau Pathfinders are protected by a lighter form of the standard Combat Armour employed by Fire Warriors known as Recon Armour. Recon Armour sacrifices a degree of protection for greater freedom of movement and better stealth capabilities. A Pathfinder Shas'ui will often have additional hard-wired combat systems cybernetically implanted into his body or integrated into his armour as his rank allows, and these can include systems usually found only on Tau Battlesuits, such as a Blacksun Filter, a Target Lock or a Multi-Tracker

Most Tau Pathfinder Teams make use of specially modified Devilfish transports to aid them in getting into and out of position during their missions. These Devilfish can also provide supporting heavy firepower if necessary. Devilfish assigned to Pathfinders will be equipped with a Marker Beacon -– a variant of Marker Light technology that is used to designate a position to which jump troops and orbital insertion craft can be guided, allowing units such as Tau Battlesuit teams to drop directly onto their target. Pathfinders sometimes use Tetra speeders as a light and fast transport in place of a Devilfish, and this allows them to get into position far ahead of a Hunter Cadre before dismounting and continuing on to their targets on foot so as to remain undetected. Once the reconnaissance mission has been completed, they will return to their speeders and race back to their own forces 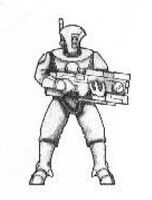 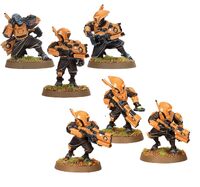 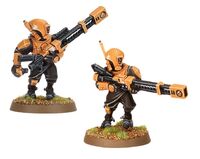 A pair of Tau Pathfinders armed with Ion Rifles
Add a photo to this gallery
Retrieved from "https://warhammer40k.fandom.com/wiki/Pathfinder_(T%27au)?oldid=190285"
Community content is available under CC-BY-SA unless otherwise noted.