The Pallas Grav-Attack, also known simply as the Pallas, is a highly-manoeuvrable, medium-armoured, anti-gravitic hunter-killer vehicle utilised exclusively by the Legio Custodes during the Great Crusade and Horus Heresy eras. It incorporated numerous technologies originally unearthed by the famed techno-archaeologist Arkhan Land.

In ancient times, the Legio Custodes relied on the Pallas' superior agility to inflict devastating hit-and-run assaults on the enemy or to hunt down fleeing targets. In addition, these capabilities allow Pallas Grav-Attack Squadrons to be used as reconnaissance units or as skirmishing forces large enough to pin down or delay the enemy in place as the main bulk of the Legio Custodes ' heavy infantry forces were deployed. It is unknown if the Pallas is still in use by the Adeptus Custodes of the 41st Millennium.

Designed as a high manoeuvrability hunter-killer, the Pallas provided the ancient Legio Custodes with a rapid-strike capacity greater than that which could be afforded by the use of ground troops alone. In this it replaced standard pattern skimmers as well as larger war machines such as the ancient Jocasta Pattern Grav-Attacks, themselves relics of the Unification Wars, and considerably smaller Hermes Grav-Sleds, which while highly agile and swift, offered little in the way of combat survivability. In addition to their relative durability and extreme turn of speed, the Pallas' more well-rounded abilities allowed the Grav-Attack to also be used as reconnaissance units or as skirmishing forces in larger assault groups to pin or delay the enemy in place as the main bulk of the Legio rallied to meet a threat either in direct confrontation or ambush.

The Pallas was designed, it is reported, to incorporate advanced manoeuvring and autonomous response systems recovered by the great techno-archaeologist Arkhan Land. The Pallas Pattern Grav-Attack was one of the most recent designs to have entered service with the Legio Custodes prior to the Burning of Prospero. Clearly based upon the advanced repulsor-lift technology pioneered by the Coronus Grav-Carrier and Caladius Grav-Tank, it was smaller than either, a single-seat, high-speed attack skimmer analogous in role to the Land Speeders of the Legiones Astartes.

The Pallas was also very powerfully armed for a vehicle of its size, with its standard configuration carrying cycle-linked Arachnus Blaze Cannons, a highly flexible Laser Weapon able to unleash rapid individual pulses of fire or concentrate them into a single blast-beam, allowing it to serve ably as both an anti-infantry and anti-armour device. Rarer variants did exist, including those equipped with extremely powerful Adrathic Disintegration Beam Weapons.

A Pallas Grav-Attack may take any of the following upgrades:

Any Pallas Grav-Attack may exchange its twin-linked Arachnus Blaze Cannon for the following:

A Pallas Grav-Attack vehicle (side view), the Reshep-Alpha, part of the Prosperine Censure Force deployed during the Burning of Prospero. 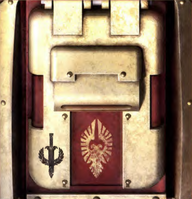 Pallas Grav-Attack panel; this vehicle was designated as the lead element of an attack squadron, which is denoted by the symbol of the Misericordia blade. The ancient device of the blade and wreath denotes both authority and the right to enact judgement upon any of the Emperor's subjects.
Add a photo to this gallery
Retrieved from "https://warhammer40k.fandom.com/wiki/Pallas_Grav-Attack?oldid=337667"
Community content is available under CC-BY-SA unless otherwise noted.