The Osiron Pattern Contemptor Dreadnought, or simply the Osiron Dreadnought, was a variant of the ancient Contemptor Pattern Dreadnought used by the Thousand Sons Legion during the Great Crusade and Horus Heresy that allowed an Astartes psyker to continue to use his powers after being transformed into a cybernetic behemoth.

Like the current Dreadnoughts now in service, this pattern served as a cybernetic sarcophagus for an Astartes who had been so badly wounded in battle that his only chance for continued service to the Emperor lay in being interred within.

For many solar decades the arts by which the power of an Astartes psyker could be maintained medically within the armoured sarcophagus of a Dreadnought eluded the Thousand Sons and any other Space Marine Legion that tried, with the occupant experiencing a lingering death, madness or malign psychic phenomena. The Osiron Pattern Dreadnought came about as the result of Magnus the Red himself applying his brilliant mind to solve the problem, resulting in the creation of a device known as the "Osiron."

This device takes the form of a crown of psychometric barrier lattice encasing the occupant's living brain. The Osiron device was difficult to construct and was barely understood by even the most learned psi-arcanists, though this did not stop the Thousand Sons from outfitting it to their Contemptor Pattern Dreadnoughts, with startlingly powerful results. Imperial records indicate that Magnus the Red, before the Council of Nikaea, gave the schematics of the Osiron device to all of the other Space Marine Legions, though it is likely that most spurned this gift entirely. It is unknown if the Osiron Pattern Dreadnought is still used by the Thousand Sons, or if any other Astartes Legions or their descendants made use of the Osiron.

Although the Blood Angels Chapter makes use of Librarian Dreadnoughts, it is unknown if those walkers make use of the Osiron device or some another means by which a Librarian may be entombed within a Dreadnought sarcophagus without going insane.

Smoke Launchers and a Searchlight completed the standard weapons load-out. The Osiron's standard weapons complement could be replaced with a number of different weapons to suit different tactical needs, including a Multi-melta, a set of twin-linked Autocannons, a Heavy Plasma Cannon, a Kheres Pattern Assault Cannon, a twin-linked Lascannon, a power-leeching Heavy Conversion Beamer, or the ability to equip another Dreadnought Close Combat Weapon with a built-in twin-linked Bolter.

An Osiron can replace its second built-in twin-linked Bolter with a Heavy Flamer, a Plasma Blaster or a Graviton Gun, if equipped with a second Dreadnought Close Combat Weapon. It can be outfitted with Extra Armour Plating and a carapace-mounted Havoc Missile Launcher. All Contemptor Dreadnoughts are protected by advanced Atomantic Shielding which generates a protective gravitic shield around the walker using an advanced Atomantic Power Generator that provides greater protection from both ranged and melee attacks for the walker.

However, when damaged, the Atomantic Power Generator can overload and result in a devastating miniature atomic explosion which will badly damage nearby allied units. The Osiron Dreadnought is also capable of using whatever psychic powers its occupant once wielded as a mortal warrior.

An Osiron Pattern Dreadnought is armed and equipped with:

Osiron Pattern Dreadnoughts may replace their twin-linked Heavy Bolters with any of these options:

Osiron Pattern Dreadnought may replace their built-in twin-linked Bolters from their second Dreadnought Close Combat Weapon (if present) with any of these options:

Osiron Pattern Dreadnoughts may also have a variety of vehicle equipment such as:

The ancient specifications of this class of Dreadnought are currently unknown to the Adeptus Mechanicus. 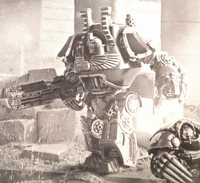 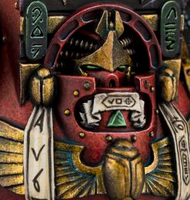 A close-up of the Osiron Dreadnought's sarcophagus
Add a photo to this gallery
Retrieved from "https://warhammer40k.fandom.com/wiki/Osiron_Pattern_Contemptor_Dreadnought?oldid=337933"
Community content is available under CC-BY-SA unless otherwise noted.