The Orion Assault Dropship, also known simply as the Orion, is a super-heavy flyer utilised exclusively by the Legio Custodes, the elite bodyguard of the Emperor of Mankind, during the Great Crusade and Horus Heresy eras.

Utilising ancient and forbidden technology from the Dark Age of Technology and armed with a formidable array of heavy weapons, the Orion Dropship was the ultimate troop delivery transport utlised by the forces of the ancient Imperium of Man.

It is unknown if the Orion is still in use by the Adeptus Custodes of the 41st Millennium.

Created as a dedicated super-heavy assault dropship for the Legio Custodes, the Enyalas Pattern Orion can carry a full task force of the Custodians into combat.

Protected by frontal armour superior to that of the Legiones Astartes Thunderhawk gunship, its Arachnus Heavy Blaze Cannon and Heavy Bolters can swiftly clear a landing zone of hostile infantry and armour with brutal efficiency, allowing the units within to deploy before it soars back into the sky to unleash death upon any foe who dares approach.

The Orion possesses one access ramp for Custodians at the rear of the fuselage. 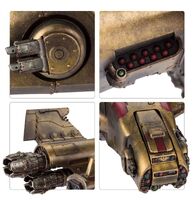 Close-up view of the various weapons and technology utilised by the Orion Assault Dropship. 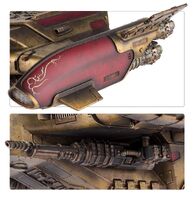 Close-up view of the advanced technology, design and weaponry of an Orion Assault Dropship.
Add a photo to this gallery
Retrieved from "https://warhammer40k.fandom.com/wiki/Orion_Assault_Dropship?oldid=334928"
Community content is available under CC-BY-SA unless otherwise noted.