Order of the Sacred Rose

"Within me burns the holy radiance of the Emperor made manifest, while your soul festers with the meagre filth of Chaos. I am the light to your darkness, heretic. As sudden dawn scatters the shadows of night, so I and my sisters shall purge all trace of you from this holy place and make it as though you never were."

Order of the Sacred Rose

The Order of the Sacred Rose is one of the major Orders Militant of the Adepta Sororitas, or the Sisters of Battle, founded in honour of Saint Arabella by the Ecclesiarch Deacis VI in the middle of the 38th Millennium at the same time as the Order of the Bloody Rose was founded. The order is based on Terra in the Convent Prioris.

In the wake of the mad High Lord Goge Vandire's downfall in the 36th Millennium, which ended his tyrannical Reign of Blood, Sebastian Thor was declared Ecclesiarch, and instituted sweeping reforms to the Ecclesiarchy. The High Lords of Terra were fearful of a repetition of the Reign of Blood. And so the "Decree Passive" was passed, forbidding the Ecclesiarchy from maintaining "men under arms."

Alicia Dominica, leader of the Daughters of the Emperor, at Thor's order, formally founded the Orders Militant of the Adepta Sororitas, which adhered to the letter if not the spirit of the decree in that all its warriors were female.

Following Thor's Reformation of the Ecclesiarchy, the newly founded Adepta Sororitas were split between the Convent Prioris on Holy Terra and the Convent Sanctorum on Ophelia VII.

Both of these convents are massive fortresses housing tens of thousands of sisters. Those sisters still residing at San Leor were transported to the new convents, and the foundations of the non-militant orders were laid.

In time, the Orders Militant grew into larger and more powerful organisations and Sebastian Thor's successor, the Ecclesiarch Alexis XXII, decreed that the two convents each be divided into two Orders Militant.

Though Arabella was only canonised posthumously, she performed countless miracles during her lifetime. She travelled the Imperium serving as a commander and beacon of faith for many solar decades. The circumstances surrounding her martyrdom are not recorded in any Ecclesiarchal text, but in the 38th Millennium the Order of the Sacred Rose was founded in her name.

Ecclesiarch Deacis VI formed the order from the sisters of the Convent Prioris, and from the outset the Sacred Rose proved themselves worthy of their Matriarch. Through their Wars of Faith they brought the light of the Emperor to regions long thought lost to the darkness -- Imperial planets were freed from the yoke of heretical tyrants, cabals of xenos mystics were hunted down and butchered, and sanctuaries were established to serve as outposts of divinity in the most remote corners of the Imperium.

The Sacred Rose forged a sizeable parish in the Ultima Segmentum, but like Arabella they brought their faith to bear across the galaxy.

Like the Order of the Bloody Rose, the Order of the Sacred Rose was not established during the existence of its patron saint -- Arabella. In her lifetime, Arabella earned the honorific of "Liberator" and many battle-sisters, especially Retributors, are known to pray to her spirit for liberation from doubt and rash action when a cool, logical head is required.

Of all Dominica's bodyguards, Arabella was known as a particularly disciplined, even-tempered sister. However, behind her serenity lay the determination of a resolute warrior, and her symbol was thus a white rose, held aloft in a mailed gauntlet.

The white-armoured Sisters of the Sacred Rose embody these same virtues, facing down alien hordes and Warp-spawned monsters with bolters calmly levelled where lesser warriors would panic and falter.

The order's ability to draw others to their cause has been of crucial value since the Great Rift tore open at the start of the Era Indomitus. The occluding mass of Warp Storms has plunged hundreds of thousands of worlds into perpetual darkness. Astropathic lines of communication have been severed by the psychic upheaval. Billions of distress calls have been lost in the screaming void.

Cut off from the light of the Astronomican, Navigators are unable to guide voidships between distant stars, and so even those cries for help that are received can rarely be answered with action. The majority of the Sacred Rose's sanctuaries lie deep within the Imperium Nihilus, but few have succumbed to the nightmares unleashed across that half of the galaxy.

The sisters of the Sacred Rose have remained a steadfast beacon of hope, and have fought the enemies of the faith with the same resoluteness of spirit that they have always possessed. Where many worlds were consumed by panic and fear, even before the servants of the Dark Gods fell upon them, those under the care of the order have become bastions of defiance.

Sororitas patrols execute anyone who expresses doubt in the security of the Imperium. At the same time, Astra Militarum regiments are commandeered by the order, and soldiers showing the slightest hints of mutation are expunged.

On each planet, the Sororitas lead defences against legions of daemons and Heretic Astartes. Yet it is not only their own worlds that they fight to protect. The Sisters of the Sacred Rose have miraculously appeared in multiple war zones across the Imperium Nihilus.

Few question how the Sororitas were able to hear their calls for reinforcement, or how they managed to navigate amidst the darkness and horror. Those that do are told by the sisters that Saint Arabella always provides guidance, even when the Emperor's will is not clear.

When the sisters of the Sacred Rose march to war, they do so in a state of holy grace. Scores of Sororitas advance in perfect tactical harmony, adapting fluidly to the shifting tides of battle. Squads unleash the firepower of the holy trinity with measured discipline. As they do so, they lift their voices, singing lilting hymns in praise of the Emperor.

This symphony of choral worship and roaring weaponry quickly drowns out the screams of dying mutants and the wet tearing of heretical flesh. The sisters press the attack wherever their enemy shows weakness, sending Frag Grenades sailing into gaps in formations and blasting the exposed flanks of artillery with superheated melta beams.

Where the foe shows strength, the Sororitas stand firm, locking ranks against assaults and cutting down onrushing attackers with deliberate and devastating salvoes. Yet it is their seamless pairing of faith with physical prowess that makes them a truly indomitable force.

Miraculous bursts of speed are factored into redeployment manoeuvres, whilst the spontaneous combustion of nearby foes is relied upon as much as any Chainsword or Bolt Pistol. Assured of the Emperor's providence, the sisters of the Sacred Rose maintain their ineffable serenity as they slaughter all before them.

The Order of the Sacred Rose are often accompanied to war by an inordinate number of Ecclesiarchal followers. Adeptus Ministorum Priests and their fanatical conclaves flock to the Sororitas, eager to witness the miracles that will unfold. As such, even small missions are rarely short of soldiers.

A core of Sororitas may be supported by many devotees of the Imperial Cult, their prayers and cries of penance intermingling with the battle hymn of the Sacred Rose. Canonesses of the order welcome these faithful auxiliaries, and teach the sisters in their charge that the Emperor has the power to act through the least of His servants.

Saint Arabella herself was known to gather the unwashed rabble to her banner in times of battle, and it is said that the power of her conviction transformed them into armies of indomitable warriors.

More so than any other order, the Sacred Rose avow that they are not only devout servants of the God-Emperor -- they are the conduits of His divine will. Through them is His glory made manifest in the galaxy, for their words and actions are guided by His infallible wisdom.

The order teaches that victory comes from faith and faith alone. If a warrior has enough faith, she can command the stars to consume her enemies, and the Emperor will make it so. The Sisters act on this belief in every battle, war and crusade they wage, trusting that the triumphal slaughter of their foes has been preordained.

Even when one of their number falls, they know that this too is part of the Emperor's plan. A single martyr can spark a fire in a thousand souls, giving rise to an inferno of faith that can never be extinguished.

These beliefs give the sisters of the Sacred Rose an air of devout serenity that approaches that held by their Matriarch, Arabella. She was renowned for her calm nature in the face of horror, and was known among Alicia Dominica's guard as being the most even-tempered.

It is widely told that Arabella was instrumental in the negotiations between Dominica and the Custodian who led the Matriarchs before the Golden Throne. Arabella subsequently earned the honorific of "Liberator," for she sought to break the shackles of fear and doubt that bound the faithful, and strove to free Humanity from the evils of the faithless.

Though a formidable combatant, her true strength sprang from the abundance of miracles that are said to have happened in her presence. There are stories of Heretics imploding into lumps of smouldering flesh as her gaze fell upon them, crushed by the weight of their own wickedness, or having their eyes melt from their face as they beheld her glory.

Notable Sisters of the Sacred Rose

Relics of the Order

The colours of the sisters of the Sacred Rose's vestments and power armour is white with contrasting black vestments.

The linings of their cloaks are red, as are their weapons.

The badge of the Order of the Sacred Rose is a simple white rose. 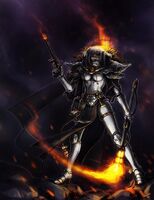 Canoness Selena Agna of the Order of the Sacred Rose.

A battle-sister of the Order of the Sacred Rose giving a fiery oratory before combat.

Battle-sisters of the Order of the Sacred Rose in battle.

A Repressor of the Order of the Sacred Rose.

A Rhino of the Order of the Sacred Rose.
Español
Community content is available under CC-BY-SA unless otherwise noted.
Advertisement