Order of the Argent Shroud

"Heretics crave the cleansing fire of absolution. They need not fear for we shall deliver."


— Axiom First, attributed to Canoness Helflax of the Order of the Argent Shroud.

Order of the Argent Shroud

The Order of the Argent Shroud is one of the major Orders Militant of the Adepta Sororitas, or the Sisters of Battle, founded in honour of Saint Silvana by the Ecclesiarch Alexis XXII (the long-lived successor of the great reformer, Sebastian Thor) in the 36th Millennium.

It was at that time that the Convent Sanctorum was split between the convents on Ophelia VII and Terra, founding the Orders Militant of the Ebon Chalice, Valorous Heart, Fiery Heart and the Argent Shroud.

The majority of the Argent Shroud's sanctuaries lie in the region of space that abuts the jagged mass of Warp Storms known as the Great Rift. During the Noctis Aeterna, when Chaos energies were blasted across the galaxy and the light of the holy Astronomican was temporarily extinguished, many of these sanctuary worlds were thought lost.

Screaming maelstroms enveloped entire sub-parishes, while countless other worlds under the order's watch were bathed in the warping glow of the Cicatrix Maledictum. As galactic maps were compiled and the true scale of the horror became apparent, it was estimated that as many as eighty percent of the Argent Shroud's sisters might have been swallowed by the yawning maw.

But in the harrowing years of the Era Indomitus since, the order has continued to fight against the marauding forces of Chaos without showing any signs of diminishment. The Sororitas appear without warning in raging war zones along the breadth of the Great Rift, striking with crippling speed at their unprepared enemies.

Multiple preceptories that were thought lost have since been seen in battle, and though they say nothing of the fates of their sanctuary worlds, they fight with unmatched hatred against the servants of the Dark Gods.

Like the other founding saints of the Sororitas, Silvana was one of five sisters and a member of Alicia Dominica's bodyguard when she was taken before the Golden Throne. She is noted for the many selfless acts of self-sacrifice she performed throughout her life, and sisters who have survived a battle despite terrible odds often invoke her name in thanks for deliverance from the forces of evil.

She was one of the first sisters to lead Imperial Crusades in the name of the Emperor of Mankind. Her service as head of the order was brief. Shortly after Alicia Dominica had founded the Order of the Ebon Chalice, the remaining sisters of the Convent Prioris were placed under Silvana's command -- but Silvana was struck down before launching a single War of Faith.

In the late 36th Millennium, Silvana is said to have died after being poisoned by a Death Cult assassin, and the hjournal of Ecclesiarch Alexis XXII states that her body mysteriously vanished after having laid in state for a solar week within the Inner Sanctum of the Convent Prioris.

Some suggest the murderer was an agent still loyal to Goge Vandire's vision of the Ecclesiarchy, whereas others propose that the forces of the heretical Alpha Legion played a hand in the fell deed.

A silvery image of her bones was left imprinted on her death shroud, which is revered as one of the sisterhood's most holy relics, and that gives the order its title. The image most often associated with Saint Silvana is that death shroud, imprinted with the ghostly image of her skeleton.

She was declared an Imperial Saint by the unanimous vote of the Holy Synod of the Ecclesiarchy. Silvana was renowned for her altruistic spirit and her stoic faith. She seldom spoke, believing that deeds on the battlefield spoke more of a warrior's devotion than any words.

The Sisters of the Argent Shroud likewise rarely speak, and they are famed for their selfless acts of heroism. As such, the Order fields a high number of Celestian and Seraphim squads, their faith a shield as strong as their silver armour and their righteousness a weapon as potent as Bolter fire.

Without fear or doubt, the sisters of the Argent Shroud throw themselves into the deadliest conflicts, marching boldly against overwhelming enemy numbers and into hellish battlefield conditions. They avoid formulating grand stratagems and rarely communicate intended tactics to their allies, to the ire of many Imperial generals.

Simply put, the order places its trust in the divine guidance of the Emperor more than in the carefully orchestrated plans of His fallible servants. The results achieved by the Argent Shroud soon put paid to any misgivings. Spearheads of silver-clad warriors race towards teeming xenos throngs, and invasion cathedrums hurtle onto worlds writhing with Chaos energy.

With swift surges the Sororitas smash through the defensive formations of far-larger armies, destroying monstrous artillery batteries stationed behind the front lines, and permanently silencing the demagoguery of heretical enemy commanders. Lightning-fast assaults are followed by rapid withdrawals, and as the foe reels in confusion, the Sisters of the Argent Shroud reform and strike again.

By committing themselves so boldly to these offensives, the warriors of the Argent Shroud often leave themselves cut off from support, surrounded and outgunned. But it is in such dire circumstances that their faith shines brightest. The sisters cry out to Saint Silvana for protection, knowing that their fallen saint watches over them in battle -- incoming salvoes ricochet off their gleaming armour, brutal enemy blades fail to find their mark, and blasts of malefic energy veer miraculously off course.

Filled with divine conviction, the Sororitas fight on against impossible odds, standing strong amidst the carnage as they drop their foes one by one. Those sisters who fall often save their entire squad from annihilation with their dying action, throwing themselves into the line of fire just as their Matriarch would have done.

There are countless legends in which the sisters of the Argent Shroud emerged from battles that Imperial logisticians had calculated to be unsurvivable.

The most famous of these was the opening assault of the Gyre Crusade, in which the order was first deployed to war. It is said that a commandery fought a raging war across the magma flats of Dvost Prime that lasted a whole Terran year, emerging with only a handful of losses and the skulls of three Iron Warriors Warpsmiths.

Due to their propensity for hit-and run assaults, the Sisters of the Argent Shroud have some of the deadliest and most experienced shock troops of all the Adepta Sororitas. Many of the order's commanderies boast large contingents of Dominion Squads, who are deployed en masse to break through the defensive lines of unsuspecting enemies, or are sent in small numbers to infiltrate fortresses, macro-bunkers and command centres in hostile territory.

These Dominions are also leaders in many of the Order’s rites of worship, their prayers on the battlefield often being the first intoned before being echoed by the other Sisters.

The Order of the Argent Shroud teaches that deeds have more power than words when it comes to purifying the spirit and purging the taint of corruption from the Imperium. This belief is derived from the example of Silvana, whose acts of bravery and faithfulness were well recorded during the Age of Apostasy, yet not a single word spoken by her is recorded in any surviving transcription from the time.

Her sisters emulate this by speaking very little and by entering long periods of complete silence whenever they engage in training. This limitation of speech does not preclude them from prayer or worship, and like the members of other orders they still chant hymns of wrathful purgation as they march into battle.

But the sisters of the Argent Shroud believe that it is more righteous to provide their service to the God-Emperor than it is to ask for His holy favour.

A peculiarity amongst the Order of the Argent Shroud lies with how they treat their dead. Where the members of other orders cry out when a comrade is slain, reciting prayers to guide the fallen's soul to the Emperor and oaths of holy vengeance against the enemy, the sisters of the Argent Shroud say not a word.

Amongst their ranks, death is met with silence. Certain Ecclesiarchal scholars attribute this to a belief within the order that martyrdom is a luxury, a reprieve from sacred duty that should only come when there are no more enemies left to slay.

Yet the dead Sororitas are still handled with great care and solemnity after the fighting has finished. The martyrs are removed from the battlefield in sombre processions, their wounds cleaned and dressed, their armour repaired and polished, and they are laid to rest for seven solar days in the sanctuary in which they served.

After that, the bodies are removed, though what becomes of them after this point is not known by anyone outside the order.

Relics of the Argent Shroud

Notable Sisters of the Argent Shroud

As the name of the order suggests, these Sisters of Battle wear silver power armour coupled with white cloaks that have red linings.

The weapons that they bear are also red.

This order's iconography is that of an ebon skull with an Iron Halo. 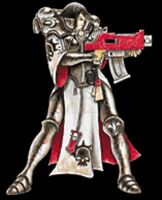 Order of the Argent Shroud battle-sister

Battle-sister Squad of the Order of the Argent Shroud
Español
Community content is available under CC-BY-SA unless otherwise noted.
Advertisement