For the naval vessel of the Kor'vattra also codenamed Orca by the Imperium, please see Kass'l (Orca)-class Gunship.

The Tau Navy's Orca Dropship is a dedicated armoured orbital transport shuttle for ferrying Tau troops, equipment and supplies from Tau starships in orbit to a planet's surface. Unlike the Space Marine Thunderhawk gunship, or the Tau's own far larger Manta, the Orca is not a frontline combat vehicle and is only equipped for self-defence. This is because its primary function is transporting Tau troops, which usually takes place well away from any fighting. Orcas are well-armoured for their role and utilise the same unknown nano-crystalline alloy that is also used in many other Tau vehicles and aircraft. Using the Tau's anti-gravity technology and powered by quad ramjets, the Orca is also fast and highly manoeuvrable despite its size and bulky appearance, allowing for the more rapid deployment of Tau troops.

Orcas serve purely as a transport for Tau forces, and are primarily used to bring Tau forces from orbiting Tau warships down to the surface of a target world. Once large planetary assault operations are underway, Orcas will be used to support Mantas by providing additional transport capacity for Tau troops in the field. Whilst Mantas transport the bulk of the Tau forces, Orcas allow a Tau commander to be flexible in the deployment of his Hunter Cadres in different battle-zones. However, an Orca will not usually drop Tau troops directly into combat. Instead, those Tau Fire Warriors being transported by an Orca are more likely to be inserted some distance away from the enemy where they can take position before entering combat. When Tau troops are deployed directly into combat by an Orca, however, the aircraft will often skim closely along the ground so that troops equipped with Jetpacks can leap out, rather than having the Orca land on a dangerous, fire-swept drop zone that could damage or destroy the aircraft. Orcas are also commonly used as transports for special non-combat missions due to their versatile nature, and have been known to transport supplies, move scout units into forward positions in relative safety, carry Tau troops on covert missions, drop deployables to support Tau actions, and transport important personnel such as Ethereals, Water Caste diplomats or a Shas’o commander, along with their respective bodyguards. On particularly dangerous missions or if approaching a battlefield known to be under heavy fire, a flight of Orcas will be defended by a squadron of Barracudas, whose job is to intercept enemy fighters or engage ground targets that threaten an Orca and its precious cargo. An Orca is also equipped with basic self-defence weaponry to defend against attacks by enemy aircraft.

During the Taros Campaign, Orca Dropships played an important role in the overall Tau strategy to defeat the attacking Imperial forces. The initial Tau planetary landings were performed by Orcas where massive concerted drops of multiple Hunter Cadres onto Taros were done well before Imperial forces arrived. Orcas operating at night and using Blacksun Filters would insert Pathfinders and Stealthsuit teams behind enemy lines in the unoccupied deserts to disrupt the Imperial offensive and ambush supply lines, and the Tau commander Shas’El K’irri launched a daring raid from an Orca on an Imperial Navy airbase where the Orca landed directly on the main runway. Orcas were the workhorse of Tau forces on the planet, moving troops and supplies to and from combat zones throughout the whole campaign. It is estimated that at the peak of fighting on Taros, Tau forces were operating in excess of 200 Orcas, although exact figures are unknown to the Imperium. There were also unconfirmed reports of Orca variants armed with multiple Missile racks and bomb bays that were used as makeshift air support for Tau ground forces during the Taros Campaign, but none were positively identified.

An Orca is primarily armed with ventral, pop-down turret-mounted weaponry which provides some protection from enemy interceptors attacking from below. The weaponry is not used for dogfighting, however. Orcas primarily use their defensive weaponry to sweep and clear a landing zone of enemy targets prior to landing. Integrated weaponry within the turret includes twin-linked Long-Barrelled Burst Cannons and a Missile Pod. Orcas are also equipped with a Targeting Array for increased accuracy when firing.

An Orca's large hold can carry up to the equivalent of 48 Tau Fire Warriors and their equipment, and two or three Orcas can transport an entire Hunter Cadre's worth of troops, drones and battlesuits onto a planet's surface. Troops disembark from the rear ramp once an Orca has reached its destination. However, Tau Battlesuit troops and Drones can opt to jump from the aircraft at high altitudes and drop directly into battle from above. An Orca's cargo hold can be adapted to carry a variety of different kinds of Tau troops and supplies and many different fittings can be placed inside. The standard internal loadout of an Orca cargo bay includes Drone transport racks, seats for Tau warriors, and weapon stowage racks which can fit Pulse Rifles, Pulse Carbines and Rail Rifles. An Orca also can mount a roof-mounted automated Battlesuit transportation rail that can fit up to six XV8 Crisis Battlesuits or three XV88 Broadside Battlesuits, and hold them in place using magnetic rail clamps. However, this extra space can be used to carry extra Tau warriors such as Pathfinders and Stealthsuits, and other Tau units such as Drone Sentry Turrets, Remote Sensor Towers, Tetras, Kroot Carnivores, Krootox and Kroot Hounds. As well as a large cargo hold, an Orca also possesses a forward-upper command deck from which two Fire Caste operators can monitor combat or resupply operations. A extra seat is also available for important individuals such as an Ethereal or a Tau commander. Each Orca is piloted by a single Air Caste pilot and the pilot's compartment or cockpit is also an escape pod from which the pilot can eject from the aircraft in case of an emergency. An Orca is commonly outfitted with a secure communications boom on its rear dorsal side, and this boom doubles as an exterior air data sensor and attack warning system. A modified variant of the Orca transport intended to be used for deep strike missions may also be used to transport up to six XV9 Hazard Battlesuits, and includes a modified cargo hold to accommodate the size of the Battlesuits, defensive energy fields for additional protection, and more skilled Air Caste pilots who can pilot the Orca close to the ground as if it were a skimmer.

Orcas can also be equipped with any of the following Tau vehicle support systems: 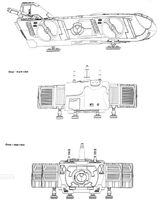 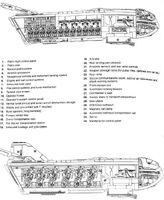 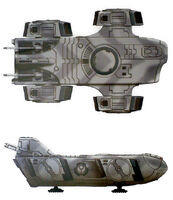 An Orca of Air Cadre El Ao'rata, from the Ksi'm'yen Sept 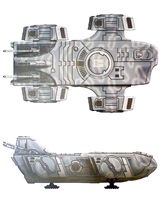 An Orca of Air Cadre El'Tia, from the Ksi'm'yen Sept 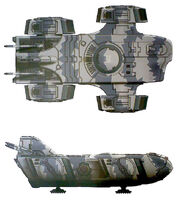 An Orca of Air Cadre El'Kala, from the Ksi'm'yen Sept

An Orca dropship camouflaged for night operations; landing gear deployed and turret retracted; this Orca was destroyed during a Tau raid

An Orca dropship with landing gear deployed and turret retracted; this Orca was used to infiltrate Pathfinders and XV25 Stealthsuit teams into the Imperial Guard's rear area during the Taros Campaign

An Orca dropship part of the Nimbosa Task Force 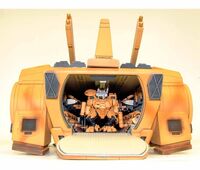 Rear view of an Orca dropship with its boarding ramp deployed 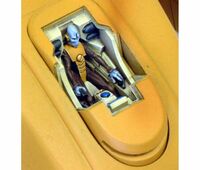 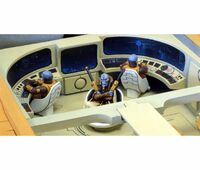 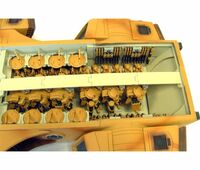 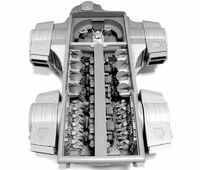 Cut-away view of an Orca interior
Add a photo to this gallery
Retrieved from "https://warhammer40k.fandom.com/wiki/Orca?oldid=322181"
Community content is available under CC-BY-SA unless otherwise noted.