The Ork Onslaught-class Attack Ship is ugly, difficult to manoeuvre and lightly armoured along its flanks and rear. This lack of speed, manoeuverability, armour, and broadside firepower leaves it suitable for just one role: head-on attack.

However, its thick prow armour and large battery of forward gunz make it very good at this role, particularly during its initial attack run, as many Imperial Navy starship commanders have discovered in their final moment of dismay.

As if all that was not enough, the Onslaught, like all Ork Attack Craft, is capable of atmospheric operations and can land on planets, allowing it to deliver another Greenskin warband and their vehicles and artillery to attacking Ork ground forces. 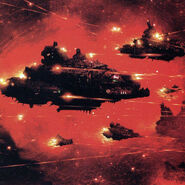 An Ork Onslaught Attack Ship.
Add a photo to this gallery
Retrieved from "https://warhammer40k.fandom.com/wiki/Onslaught-class_Attack_Ship?oldid=367737"
Community content is available under CC-BY-SA unless otherwise noted.