"The fires through which we pass in this life are but the light of the Emperor's forge. Our triumphs and tragedies are the heat by which we are tempered into weapons fit for his service."

The Officio Prefectus, also known as the Commissariat, is a subdivision of the Departmento Munitorum, whose task is to ensure the recruitment, training and deployment of the corps of Astra Militarum political officers tasked with keeping the troops of the Imperial Guard on mission and under intense discipline, even in the face of some of the most terrifying threats in the galaxy.

The Imperial Guard is exposed on a regular basis to terrible threats which can shake the resolve of even the most steel-hearted veteran, from bizarre aliens to the terrifying inhabitants of the Warp. To encourage the troops to fight the most horrendous of situations, political officers called Commissars are attached to regiments of the Imperial Guard.

The role of a Commissar is to fight alongside the regiment's regular officers and take control when morale is flagging or the men are not fighting with sufficient zeal. In such situations a Commissar can take over command from a regular officer and summarily execute any man who tries to flee.

Even the colonel of a regiment must be sure to display courage and the proper zeal at all times when a Commissar is watching him or her.

Commissars are orphans of parents who were killed serving the Imperium in one of the other Imperial military forces or adepta who were educated within the Ecclesiarchy's special orphanage schools, the Schola Progenium, and selected from among those who show fearless faith in their Emperor.

Upon reaching adolescence, they are recruited by the Officio Prefectus and given advanced training in combat tactics and Human psychology. Once ready, they are then assigned by the Commissariat to Astra Militarum regiments whether the regiment in question likes it or not.

Commissars are pious, oft-times self-righteous and unswerving in their purpose. They are exceptionally brave and many a seemingly hopeless battle has been turned by a Commissar taking command.

However, all Commissars are universally feared and loathed by the troops of the Astra Militarum and are always the first officers against the wall when a regiment mutinies.

"What is the self compared to the God-Emperor's service?"

The Imperial Army of the Great Crusade was organised from the fighting men of the worlds liberated by the Space Marine Legions of the Emperor of Mankind. They were used almost exclusively for garrison and pacification roles on both their home and foreign worlds throughout the early stages of the crusade, but by the latter half, they were fighting offensive battles and supplementing the Space Marine Legions as they began to be stretched thinner.

The Imperial Army was organized with no particular standardization, and regimental makeups ranged from barbarians wielding Power Axes to advanced mechanized infantry armed with energy weapons whose designs have now been lost. During this time, the regiments were left almost exclusively to their own recognisance as long as they served faithfully, and conformed to the few restrictions placed on them.

During the Great Crusade, some Imperial Army regiments utilised specialists known as Discipline Masters. These stern task masters were responsible for maintaining discipline within the regiment to which they were assigned. They were also responsible for tracking down Imperial Army deserters that repudiated their oaths to the Emperor and shirked their soldierly responsibilities.

They were known to use hunting eagles to help them track their prey. Their fanatical dedication to the service of the Emperor overrode any feelings of compassion, mercy or humanity when carrying out the summary executions of those found wanting, for which they employed a ceremonial Electro-scythe. The Discipline Masters served as the pre-cursor and model for the later Commissariat and its merciless Commissars.

During the Horus Heresy, an estimated 40-50% of the Imperial Army turned on the Emperor and joined the Warmaster Horus to make war on the Imperium. Most of these Traitor Army regiments eventually broke down into feudal and fragmented Chaos Cults, worshiping the various Chaos Gods, and causing great havoc amongst the civilian populations of millions of worlds.

With the added range of their regimental cruisers, the Traitor Army units spread quickly and left a bloody swathe of depopulated and dead worlds in their wake, many of which had once been their own responsibilities or even their homeworlds.

It is suspected that a number of Traitor Army regiments were used in the Siege of Terra, though the exact extent of the Traitor forces has never been properly calculated, and most Chaos-tainted Imperial Army regiments became indistinguishable from each other.

With Horus' defeat, and the retreat of the forces of Chaos to the Eye of Terror, the remaining Loyalist regiments of the Imperial Army underwent massive changes, and became heavily standardised. The Imperial Navy was separated from the Imperial Army and transformed into a separate service, whilst the Imperial Army's ground forces were renamed the Astra Militarum or "Imperial Guard."

During this time, the Commissariat was formed to be the Imperium's bulwark among the members of the Astra Militarum against the influence of Chaos. The Commissar was given power to ensure his or her regiment's continuing loyalty, and was charged to do anything necessary to prevent the corruption or spread of Chaos among the guardsmen of that unit.

Commissars were attached to every regiment, and were used extensively in the immediate wake of the Traitor forces' retreat to ensure that the population of planets that had been ravaged by Chaos were not subverted by Chaos splinter cells or sleeper Chaos Cults.

Before the Imperium was re-forged, millions of people would be executed by the Commissariat as Traitors or Heretics. Eventually, this role was given to the Imperial Inquisition and its Ordo Hereticus and Ordo Malleus.

Over the last 10,000 standard years, the Officio Prefectus has remained an important facet of the Astra Militarum's command structure, and it is rare not to see at least one Commissar attached to the command staff of a regimental officer or Lord Commander's staff. Several Commissars have even attained Imperial military commands of their own, including the Commissar Yarrick, who took command of the Steel Legionnaires of Hades Hive during the Second War for Armageddon, and became overall commander of Imperial forces during the Third War for Armageddon.

The only known Commissars to have held and retained overall command of a full regiment included Commissar Ibram Gaunt, who became the only known Colonel-Commissar of the orphaned Tanith 1st Regiment, after receiving command of the Tanith 1st, 2nd and 3rd Regiments from Warmaster Slaydo during the Sabbat Worlds Crusade, and losing the 2nd and 3rd when Tanith fell to Chaos.

Also, a ruthless individual named Lady Commissar-General Viktoria Balshin was charged with purging the perceived taint of Chaos from the Second Front of the Sabbat Worlds Crusade.

Within the Imperial military, some Planetary Defence Forces and individual sectors or sub-sectors of the Imperium possess their own Commissariat who maintain authority over the local military forces in their region of the galaxy.

These organisations are empowered with all the usual right and duties of the Imperial Commissariat, but are subordinate to the parent organisation, and possess fewer powers over regular troops of the Astra Militarum.

Nevertheless, in the past, this has caused friction between local planetary Commissariats and the official Officio Prefectus due to jurisdictional concerns, and has even been known to result in Imperial Commissars executing their local planetary counterparts for overstepping their authority.

Commissar in battle, armed with a Hand Flamer and Power Axe.

A Commissar-General; note, decorative skulls throughout his uniform, designated him as a Commissar of long service. 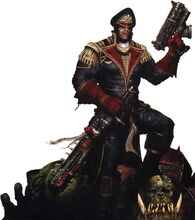 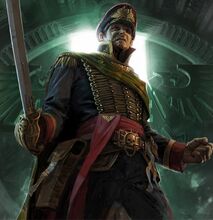 The famous Colonel-Commissar Ibram Gaunt of the Tanith First and Only Imperial Guard Regiment. 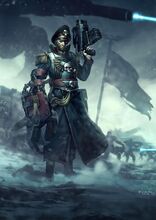 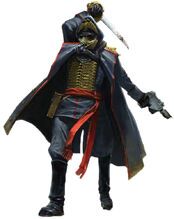 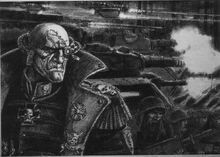 A Commissar during the Third War for Armageddon. 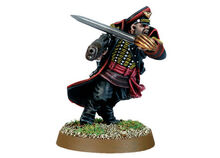 An Imperial Guard Commissar in battle, armed with a Plasma Pistol and a Power Sword.
Español
Community content is available under CC-BY-SA unless otherwise noted.
Advertisement