"...and the Great Father marks out those who are chosen with the gift of his Nurglings. These servants bear on their multitudinous backs his champions and chosen. They will war for them and nurture them and aid them in spreading the gifts of Father Nurgle to the undeserving and unappreciative Imperium of Man..."


— From a fragment of the Liber Pestilentia

Nurglings, also known as "Mites of Nurgle," "Gleeful Castoffs", "Tiny Plagues" or by their daemonic name Khan'gurani'i in the Dark Tongue, are tiny, mischievous Lesser Daemons of Nurgle.

They are surely some of the most numerous and among the most favoured children of Grandfather Nurgle. Even their appearance is pleasing to the Plague God, for each Nurgling is like a minute copy of the dread master himself.

These pernicious and capricious Daemons erupt from the boils and pustules that pock the fleshy hide of Great Unclean Ones. They caper and dance about the Greater Daemons, causing mischief whenever possible, constantly giggling as they play.

Their enemies are another matter entirely, and would do well to avoid their sharp claws; those that survive the rake of a Nurgling's talons often find their wounds festering and incurable.

The innards of a Great Unclean One are best not pondered, for such gastric caverns are not places that sane men wish to consider for too long. It is in these churning depths that the Nurglings are created.

Starting as small blobs of indescribably foul matter, Nurglings are nourished by the pulsating juices of a Great Unclean One's inner organs, growing into small facsimiles of Nurgle himself until they plop into existence as spiteful, rotund imps.

For most of their existence, Nurglings congregate around the Great Unclean One that created them. They clamber across his bulk seeking comfortable pools of liquids and warm spots under the folds of rotting flesh. Eager for attention, Nurglings chatter to their master incessantly, picking at his scabs and hoping for a fatherly belch of appreciation.

Some of Nurgle's favoured Heralds are accompanied to battle by seething tides of these diminutive monsters; those most vaunted in his sight are carried in a palanquin which is borne aloft on a carpet of Nurglings.

When not moving the palanquin, the grotesque imps will scurry around making gifts of small trinkets they find; dead animals, rotting bones, particularly splendid fungi and other such presents as they think will please their master.

Since the opening of the Great Rift and the outpouring of Warp energies into the galaxy, Nurglings have become far more prevalent in realspace. Several new diseases, including the latest strains of the Zombie Plague, are so virulent that they allow Nurglings to develop inside those afflicted. When the malevolent creatures slop forth -- eating their way out or perhaps bursting from a cyst -- they do their best to spread even more diseases.

"Kantis, slow advance. Venk, Plague Marines dead ahead, load high ex...wait...Throne! What are those things? They're all over the hull. Get the damn hatch closed. Close it! Oh no, no, no, NO!"

Though Nurglings are some of the least of Nurgle's minions, they are some of the most numerous, and among the most favoured of the Lord of All's daemonic pantheon. Much smaller than the Plaguebearers who serve as the Plague Lord's daemonnic footsoldiers or the Greater Daemons known as Great Unclean Ones, Nurglings barely reach over a Terran foot in height. Their appearance resembles Grandfather Nurgle himself, perhaps not surprising, given that Nurglings are formed within the innards of Great Unclean Ones, who themselves physically reflect Nurgle's repulsive magnificence.

Nurglings serve the Filth-father in which they were formed, often pretending that their progenitor is Nurgle himself. They play within the folds of his flesh, fetch morsels for him to consume, pick at his sores or give him new ones, and otherwise seek his approval, giggling all the while.

Like Nurgle and most of their fellow Nurglite Daemons, Nurglings are jovial and playful in nature. They will hop and cavort around their larger fellow Daemons, amusing them with their jolly antics.

As befit servants of the God of Decay, Nurglings are also quite mischievous, biting, clawing, pulling and tearing at anything that catches their fancy.

Mortal servants of the Plague God quickly learn not to entrust anything they deem valuable to the guard of Nurglings, for they inevitably will return to find the item utterly destroyed, torn to pieces and covered in filth.

Daemons of Nurgle emulate the Lord of Decay and follow his path in many different ways. When they are not vying for the attention of their parent-Daemon, Nurglings most often try to do things that reflect the mirthful nature of Nurgle himself.

This frequently leads to them interfering with the work of the Plaguebearers, who find Nurglings to be something of a nuisance -- though they don't normally give voice to their irritation, at least not when a Great Unclean One is within earshot.

Just when a Plaguebearer is nearly finished counting the number of drips of pus required to fill a particular pool, for example, a swarm of Nurglings may come running through it, playfully splashing in the rancid goo and scattering it all around. It is their nature to cause mischief, just as it is the Plaguebearer's nature to keep tallies. In the Realm of Chaos, even in the relatively ordered domain of Nurgle, it is no surprise that harmony eludes the grasp of most Daemons.

When the Death Guard Traitor Legion goes to war, infestations of Nurglings appear spontaneously wherever they go. They wriggle through the innards of the plague ships like merry little maggots, plopping unexpectedly from ventilation grates and frolicking in the cesspools that collect in the vessels' bowels.

On the battlefield, they spill from ammunition crates, cling gleefully to the hulls of advancing tanks, and even burrow through the innards of the Plague Marines themselves as they march to war.

Some attach themselves to individual warriors, following their masters around like faithful pets and attempting to "help" in any way they can. Many Death Guard find these effusive mites a constant annoyance as they filch Blight Grenades to wave, scramble up armoured limbs to lap at putrid discharge, and mimic bellowed orders in squeaky voices while waving their stubby arms.

Yet their presence is also believed to be a sign of Nurgle's favour, for the Grandfather does not entrust his squelchsome pretties to just any mortal servant.

Individually, a Nurgling is not a dangerous opponent. A grown human can simply kick it aside without difficulty. That is why Nurglings gather in monstrous swarms on the field of battle, making up for their lack of strength and size with raw numbers and their highly infectious claws and bites.

Their favorite method of attack is to overrun a single individual and bring him down under the sheer mass of their pestilent bodies. For all their mischief, Nurglings prove a surprisingly powerful asset when the fighting rages hot. Masses of them swarm across the battlefield, finding their way into hiding places such as tank wrecks, sewer systems and collapsed, corpse-choked ruins.

As the enemy draws near, the Nurglings erupt from concealment like a repugnant tidal wave, piling atop one another and spilling over their victims to muffle frantic screams and rattling panic-fire beneath hundreds of flabby little bodies.

Nurglings are rarely a formal part of any of the daemonic Plague Legions, but instead they tag along, cavorting upon the heels of the commanding Great Unclean One or scampering amongst the Heralds and troop formations. They are very protective creatures and will gleefully launch themselves at foes that threaten them or their friends.

They swarm forwards in a rush of malevolence, spilling over their victims like an irrepressible tide. Possessed of pointed teeth and sharp claws, the Nurglings swallow up their enemies in a mound of biting, scratching bodies.

Such small wounds as are inflicted by these minuscule creatures would be inconsequential were it not for the lively toxins and contagions from which the Nurglings are made, which quickly infect and mortify even the slightest injury.

Nurglings especially favour the vectoriums of the Death Guard's 4th Plague Company, gravitating towards those ruled over by Death Guard Sorcerers. Such warbands as the Filth-favoured, the Prophets of the Seven, and the Bilious Ones enter battle amidst living carpets of Nurglings.

Meanwhile, the name of Dulthrox Globbergor is renowned throughout the Death Guard; this Malignant Plaguecaster is known as the "Father of Mites," and is borne into battle upon a jabbering mountain of adoring Nurglings.

Occasionally very dedicated Chaos Champions of Nurgle will become infested with Nurglings, which will live in gaping wounds and orifices in the Champion's body and armour. Great Unclean Ones also tend to keep a large amount of favoured Nurglings upon and inside their bodies, for they find their tiny counterparts highly amusing.

Great Unclean Ones often swallow one of the Nurglings just to see from which orifice in their vast bodies the tiny giggling creature will emerge again. In battle, these Nurglings will fight ferociously to defend their host from any opponent who dares approach him.

Sometimes Nurglings are gifted to Daemonic Heralds or other powerful Chaos Champions to act as a living litter for him, or to hold him aloft atop a Palanquin of Nurgle -- a Daemonic Mount that takes the form of an ornate and mobile throne that allows the Great Unclean One or Champion of Nurgle to be carried aloft by a tide of surging Nurglings.

The tiny creatures propel the Palanquin wherever the master wishes. From his elevated position their master is able to speak to his slaves, or strike at his foes. The Palanquin itself is decorated with mouldered finery, while the rider sits casually upon a mound of decaying cushions.

In these cases, the Nurglings will treat their new master much as they had treated the Great Unclean One from which they came -- whether the new lord would prefer it or not. The Palanquin is surrounded by a cloud of flies which buzz and swarm around it. If the Palanquin is carried into hand-to-hand fighting the cloud of flies will buzz into the eyes and ears of all engaged enemies.

The cloud of flies has another effect, for each insect embodies a tiny fraction of protective magic. The cloud thus represents a considerable protective spell. The Palanquin and its rider cannot be affected by a sorcerous spell or psychic assault of any kind. As the Nurgling bearers move across the battlefield, small pools of something unpleasant and sticky form behind the Palanquins.

These pools of filth contain pus, various forms of bodily functions and other foul substances which are produced by the Nurglings. The sheer quantity of Nurgling bearers makes these pools very dangerous. Any person unfortunate enough to move over one of these sticky pools may contract the vile plague known as Nurgle's Rot. 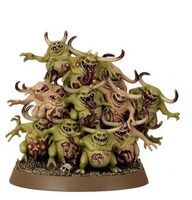 A Swarm of Nurglings.

The dreaded horde of Nurglings swarm the area. 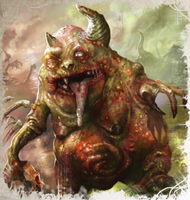 Nurglings cavorting in the Garden of Nurgle within the Realm of Chaos.
Español
Community content is available under CC-BY-SA unless otherwise noted.
Advertisement