A Noxious Blightbringer is an elite Chaos Space Marine combat specialist found exclusively within the ranks of the Death Guard Traitor Legion.

Noxious Blightbringers announce the presence of their coming with the warped tolling of monstrous bells. With every dolorous peal, splinters of madness and despair are driven into the minds of the foe, an ague of the soul leeching their vitality and leaving them nigh catatonic in the face of death.

Heralds of pestilence and misery, Noxious Blightbringers pace solemnly before the Death Guard advance. They proclaim the arrival of Mortarion's sons through the tolling of their rusted tocsins of misery, hell-forged bells of massive size whose peals ring through both reality and the Warp.

The primary role of Noxious Blightbringers is to sow dismay and weakness amidst the enemy ranks. The dissonance of their chiming bells sends waves of entropy rolling across the battlefield to batter not only the enemy's physical senses, but their souls.

The blessings of Nurgle manifest wherever the tocsins' waves hit home, each thunderous toll wearing the foe down a little more and spreading sickness and corruption. The enemy's will to fight erodes as their muscles fester and their strength leaves them. Faith and conviction are spider-webbed with cracks of doubt. Bones and organs shudder and turn green with furring growths.

In close proximity, the Empyric peals that roll from the Noxious Blightbringers torment enemy psykers. Not only must these unfortunates deal with the violent waves that threaten to overwhelm their tightly controlled abilities, but they must also face the corruption of the very powers they wield. Gnawing Warp maggots wriggle into being within the minds of those psykers who show weakness, chewing hungrily upon their new hosts' sanity until the victim is driven irrevocably mad.

Where the tolling of the tocsins corrodes the spirits of the Death Guard's enemies, it instills fresh vitality in the Legion's own warriors. Wherever they follow the Noxious Blightbringers into battle, Mortarion's sons move with a vigour that is at odds with their rotting bulk, rusted joints grating and guts swaying as they pound into combat.

To be gifted with a tocsin of misery is a great honour, bestowed by Mortarion himself upon only the most cruel and corrupt of his sons. Potent warriors in their own right, each Noxious Blightbringer becomes a living canker who revels in the spreading of disease and sorrow. Bludgeoning their way through the enemy ranks, the Blightbringers attempt to lodge themselves as deep within the enemy's lines as they can, the better to crush their spirit with the tolling of their awful bells.

In the gruelling sieges and meat grinders favoured by the 3rd Plague Company, the entropic shock waves of the tocsins of misery are invaluable. They wear down the morale of the enemy even as they bolster the Death Guard, ensuring that when one side finally breaks, it is not Mortarion's sons.

Deep within the baleswamps of the Death Guard's Daemon World known as the Plague Planet lies the Peal Yard. This fortress-factory rings with a constant cacophony, for it is here that the tocsins of misery are forged.

The Peal Yard is an interstice, existing upon the very cusp of the Warp. Within, droning daemon smiths cast the cursed bells from the screams of dying psykers, beating runes of madness and misery into them under the watchful eyes of the Chaos Lord Gothax's Tollguard warband. 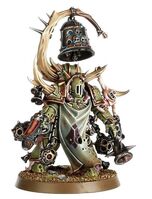 A Noxious Blightbringer arrayed in his corrupted panoply of war.
Español
Community content is available under CC-BY-SA unless otherwise noted.
Advertisement