"Da Sergeant Major asked me what my job was an' I said it was to, uh, do what I was told. He said I was a genius and gave me another medal. I likes da Imperial Guard!"

Nork Deddog is a legend in his own lifetime, an Ogryn whose fighting abilities as an Astra Militarum soldier are almost as astonishing as mental development that can only be called precocious for one of his subspecies. Due to his unusual mental acuity, he quickly came to the attention of the Commissars of the Imperial Guard and Nork soon found himself placed on special duties. Nork's reputation for loyalty is unsurpassed and his skills as an Ogryn Bodyguard have been in high demand by Imperial officers across the galaxy.

Though unquestioningly loyal, Nork is no leader. Throughout his long career, he has guarded officers with remarkable military acumen, tactical genius and an innate understanding of the Astra Militarum war machine. Unfortunately, none of this has ever rubbed off on the hulking Ogryn. His singular duty demands all of his attention, and has done for the entirety of his illustrious service. In those rare instances when the subject of his protection is grievously wounded and unable to maintain their command, allied soldiers may appeal to Nork for orders -- after all, he is typically the most decorated and experienced Veteran in a battalion. Such requests, however, are in vain. In Nork's simple mind, he still has but one duty, and he will continue to protect the fallen officer until he is told to do otherwise. Fortunately, having an unconscious officer draped across his shoulder does little to hamper Nork's ability to butcher the enemy.

Nork has saved the lives of well over one hundred officers, earning himself a chest-full of medals in the process. Dozens of war zones that would have descended into anarchy have instead seen the banners of Imperial victory raised high thanks to Nork's constant, selfless heroism. During the brief periods of peace between deployments, Nork experiences chronic discomfort whenever compelled to accompany his latest master to a social function or parade drill. However, such embarrassments only encourage Nork to fight all the harder when he returns to the field of battle, determined to prove his worth and bask in the satisfying glow of being the Imperial Guard's finest bodyguard.

Nork was selected by the Schola Progenium to serve in the Astra Militarum due to his ability to write his name (N is for Nork), count (to four), and even speak fluently and understand orders without hesitation or difficulty, this being a rare milestone in Ogryn development as the majority of Ogryns would find these tasks very difficult, if not impossible. He was taken out of the normal stream of Imperial Guard warfare and underwent biochemical neural enhancement (possibly the same process used in the creation of Bone'eads) as well as extensive martial training. Nork was then assigned as the Ogryn bodyguard of Colonel Greiss, the commanding officer of the II Catachan Regiment of the Imperial Guard. Nork is a genius by Ogryn standards, and is also the only Ogryn to have ever been assigned directly to serve a Commissar. He was assigned to guard the life of Colonel Greiss and did so faithfully.

While Greiss was as vocally warlike as any good Catachan officer should be, he was old and physically frail. The men of the regiment soon became used to the old Colonel bellowing orders from the shelter of Nork's massive frame, the Ogryn's Ripper Gun mowing down the foe with shredding bursts as shots intended for his charge rebounded harmlessly from his bulky armour. The sight of the Colonel and his Ogryn Bodyguard became a familiar one during the II Catachan's four-year-long campaign on Balor; the bone-thin Colonel bawling out his orders whilst shells burst around him and bullets sometimes even ricocheted off Nork's dense skull.

Colonel Greiss implicitly trusted Nork with his life, which has been saved by his loyal bodyguard and friend on many occasions, most notably at the disaster at Breakback Hill, also known as Hill Gamma Zero. Deddog's reputation was cemented when he carried the badly wounded Greiss to safety through hostile territory, dragging the wreckage of the Colonel's Chimera transport behind him for cover the entire way whilst being shot at by thousands of enemy troops and seemingly feeling no pain.

Since that bloody conflict, Nork's skills as a bodyguard have been in great demand. His loyalty is beyond question, and the hulking Ogryn would rather sustain terrible wounds than permit a single scratch upon his master. When the Ork Warboss Uglurk Gitsmasha and a mob of his hardest Meganobz overran the command dugout at the Battle of Chabda Bridge, Nork was the only one to stand his ground beside Sub-overlord Ven Vambold. During the ensuing brawl, Deddog bullied his way into the Orks' midst and subjected the xenos Warboss to a headbutt so ferocious that the monstrous Ork was hurled from the dugout to its death in the sizzling acid of the Chabda River far below. The remaining Orks were totally awestruck and retreated rather than face the angry Ogryn in further combat.

Nork's own body has proven time and again to be the most effective shield an Imperial Guard officer can have against enemy fire. Nork will do his utmost to protect his master from harm, even going so far as to throw himself in front of enemy fire. On the world of Follax IV, Nork selflessly leapt on top of an enemy grenade that would have otherwise killed Commander Richep, crushing both the grenade and the Grenadier who threw it to a bloody pulp beneath his massive bulk. The resultant explosion was muffled by Nork's body -- the Ogryn bodyguard seemingly noticed his resulting shrapnel wounds with only passing curiosity. Nork has personally saved the lives of over a hundred Imperial Guard officers and by doing so has been instrumental in securing victories on dozens of worlds. Though the Ogryn has a large collection of medals, laurels, citations and personal gifts, Nork cares not for trinkets and baubles. He continues to serve rather for the content feeling he gets when fighting alongside a good friend. 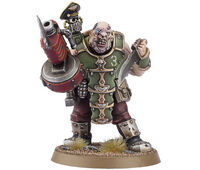 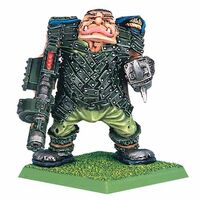 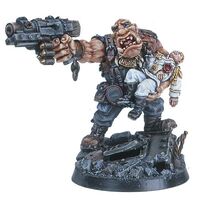 Retrieved from "https://warhammer40k.fandom.com/wiki/Nork_Deddog?oldid=313304"
Community content is available under CC-BY-SA unless otherwise noted.