A Nob (pl: Nobz) is a larger Ork Boy who is smaller than and subservient to an Ork Warboss but still possesses some authority amongst other Greenskins of his tribe or klan because of his greater-than-average size and strength. The term "Nob" is believed to be an Orkish bastardisation of the Imperial Low Gothic word for "noble."

To rise through the ranks of the Orks requires cunning brutality, brutal cunning, and smashing the head of any challenger to Nob's throne. Ork Nobz often come to blows with rival mob leaders, and go out of their way to prove their competency to their Warboss. Nobz are thus both feared and revered. They can thrive as leaders provided they can survive a few knives in the back and dole out appropriate punishments.

They are universally arrogant and headstrong, but through surviving numerous battles (with the enemy and their Boyz) they are cunning enough to make deals with some enemies.

Serving as a crude Greenskin ruling class, the Nobz are never above reminding the Boyz who's in charge by making a few bloody examples. This could involve hacking up some suitably impressive foes, or knocking a few fractious Boyz's blocks off. The Nobz aren't too fussy, just so long as it gets the message across.

Whether clustered in a menacing mob around their Warboss, or lording it over the Boyz, Nobz are a force to be reckoned with. Their armour is usually festooned with kill-trophies, their flesh criss-crossed with impressive scars, earned in pit-fights or while killing their way through strings of brutal wars.

Some Nobz even take to the field astride monstrous Warbikes, roaring through the enemy ranks like blood-soaked battering rams covered in guns.

Many Nobz also outfit themselves with a very visible token of their position, be it a large pair of horns, taken from a creature they hunted, or a massive Iron Jaw, to show they have the meanest bite around!

"See dat big tear in da sky, ladz? Deres spikey humiez in dere -- great for crumpin, and weird skulls for puttin‘ on her shootas. Follow me, and I’ll get ya right into da thick of tha fightin!"

The undisputed ruling class in the strangely egalitarian Ork hierarchy, Nobz are among the largest and most dangerous Orks in a warband. Indeed, only the Warboss or Warlord is physically larger and stronger. Like the Warboss, Nobz rise to their station through martial prowess and killing challengers. A Nob that fights and wins quickly gains the respect, and often fear, of a warband's Boyz, which allows the Nob to gain power and status. Nobz are typically found in the retinue of a Warboss or Warlord, assisting their superior in the day-to-day running of the tribe and constantly vying for power with his fellows.

Should a Warboss fall or be otherwise neutralised, his Nobz quickly fall upon one another in a savage and bloody fight until one stands victorious and takes the mantle of Warboss for himself. Occasionally, Nobz lead small bands of Ork Boyz themselves, preferring to have their own Boyz to kick around and lord their superiority over, as opposed to sucking up to a Warboss. In battle, much like Warbosses and Warlords, Nobz lead from the front, inspiring their Boyz in combat by example of their ruthlessness and brutality. Taking every excuse to lord their power over their inferiors, Nobz revel in making life a living hell for those around them. Casual brutality is only to be expected when in the company of Nobz. They consider their subordinates disposable, especially the snivelling Gretchin, and go out of their way to make that fact perfectly clear to all and sundry. Aside from their brutality, Nobz also flaunt their wealth and station by using only the finest arms and armour. Flashy suits of Mega Armour, complicated Snazzguns, and garishly decorated Trukks are all the hallmarks of rank for a Nob.

The average Ork Nob stands a good head taller and two shoulders wider than the average Ork Boy. They weigh almost twice as much, and all of that extra weight is hard, green muscle. Ork existence can be summarised by the concept "might makes right", and Nobz are the living incarnations of this concept. Orks continually challenge each other to determine their respective hierachical positions, and an Ork who emerges victorious in challenge after challenge will soon start growing bigger and put on thick muscle while his hide will take on a darker shade of green. Victory and the respect of his peers will act as a growth hormone within the Ork, and he will keep on becoming bigger and burlier until someone (usually another Nob, or the Warboss himself) "puts him in his place" by soundly beating him in a contest of strength. Most such contests are simple brawls, however some are settled by what is known in Ork Kultur as a "Eadbuttin' Kontest": The two Orks face each other, stripped of weapons and armour, grab each other by the shoulders, and take turns delivering a mighty headbutt to the other until one of the two passes out. The one remaining conscious is considered the winner of the bout.

No other Ork in a warband (save the Warboss) is allowed to have better gear than the Nobz, and anything that even remotely strikes a Nob's fancy is immediately confiscated. All of a Nob's disposable wealth goes toward purchasing better and fancier gear and "shootier" guns. Many a prolific Mekboy has made his fortune by catering to the expensive tastes of his warband's Nobz and Warboss (or done so simply under the threat of extreme violence). Dangerous in the extreme and thoughtlessly cruel, Nobz embody the Orkish mindset better than any other Greenskin, save perhaps the Warboss. Their avarice and savagery is nearly unmatched, and wherever they go, murder and strife is sure to follow. A single Nob can easily endanger whole squads of Imperial Guardsmen, and in the Spinward Front, for example, there are even many regimental medals for bringing down a Nob in battle. Defeating a Nob might mark a squad for greatness in the eyes of the Imperial Guard, but it can also bring them to the attention of a Warboss. After all, if a squad is capable of vanquishing one of his Nobz, then they can likely put up a worthy and enjoyable fight if he faces them on his own.

Ork Nobz can be found in three general places on the battlefield: in command of their own band of Boyz, in command of their own "kustom" vehicle (be it a large Battlewagon or a nice looted tank won from the Imperial Guard) or gathered in a coterie around their Warboss, following the biggest and meanest of the Orks around into the thickest of the fray, "ta show da uvva' boyz 'ow smashin' an' stompin' is done!" There are three types of "specialist" Nobz:

Nobz are able to rule over most other Orks with their brute might. As such, a Nob outclasses an Imperial Guard trooper by a frightening margin in terms of raw strength and resilience, and any squad that wishes to kill even one of these hulking creatures must use their wits and skill to lay it low. Nobz in Meganob armour tend to plow into their foes, crushing the biggest foes underfoot or with hammering blows from their weapons. Depending on their clan affiliation, Nobz in 'ard armour are sometimes more careful (so much as that term can ever be applied in Ork warfare) in battle, choosing targets of opportunity and working together to fell the most deadly enemies. Once they sight battle, most Nobz rush forward, enthusiastically (if inaccurately) firing at their foes. This is largely true whether or not the Nobz were prepared to fight before the violence ensues. Nobz in Mega Armour are hard-pressed to ambush anyone, given their massive, clanking, smoke-spewing armour. Nobz in 'ard armour can be more stealthy in their attacks, though different clans have different opinions on what constitutes proper Orky behaviour.

Nobz have no standardised wargear, as each Nob invests his spoils in the best way he sees fit. Some are traditionalists, going to war clad in leather armour, and equipped with a good Slugga and a better Choppa. Others want "moar dakka", and get the coolest Kustom Shoota they can find. Others prefer "betta stompin" and get a Power Klaw while some prefer investing in a buggy or other means of transport. A few prefer outfitting themselves with armour, either bulky Karapace Armour made from armor plates bolted to the Ork's body, or even a mighty suit of Greenskin Mega Armour.

The following is a selection of the wargear Nobz can either carry or use:

An Ork nob leading a mob 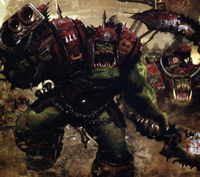 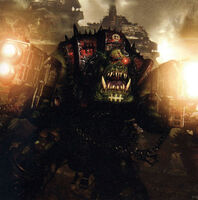 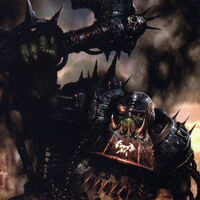 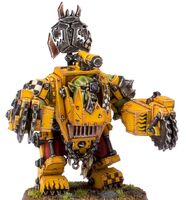 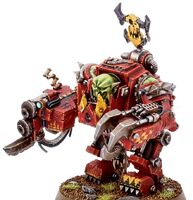 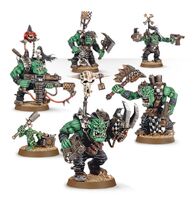 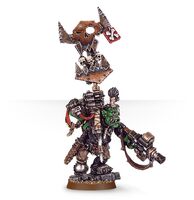