Njal Stormcaller, called the "Tempest that Walks," is the Space Wolves Space Marine Chapter's greatest Rune Priest (Librarian). He has proven to be of unparalleled ability both as an Astartes warrior and a formidable psyker without peer. The barbarian tribes of Fenris believe that the most powerful Sky Warriors can bend the savage elements themselves to their will. Njal Stormcaller is the living proof of that belief. The skies are his to command, and he takes fierce delight in summoning ice-toothed blizzards and howling gales with which to scatter and destroy those in his path. Njal has manifested a psychic talent to rival any in the Imperium. At the Battle of Goreswirl, Njal showed his true might by blasting apart the dread Bloodthirster that had slain so many of his brothers. He then scattered the Greater Daemon's minions with an ice storm so fierce that it drove them back into the Warp. From that day on, Njal has been known as the Stormcaller. He now holds the revered position of Lord of Runes, the Chapter's High Rune Priest.

As a tribesman of Fenris, Njal Stormsson was a vital and fierce warrior, flame-red of hair and forked of beard. He displayed unmatched courage in battle, wading through the blood and corpses of a rival tribe in close-quarter fighting aboard their enemy's longboats. His ferocity was such that he drew the gaze of the Space Wolves' Rune Priest Heimdall, who whisked away his battered and broken body away at the end of a terrible battle to begin his induction into the Space Wolves Chapter as a Neophyte once he was healed of his mortal injuries.

Under Heimdall's tutelage, Njal learnt to harness the destructive power of nature itself. The old Rune Priest watched with pride as the young Astartes developed a formidable psychic talent that rivalled that of many Librarians within the ranks of other Space Marine Chapters. At the Battle of Goreswirl, Njal avenged the death of his mentor Heimdall, blasting apart a dread Bloodthirster Greater Daemon of Khorne with a mighty psychic attack, before summoning forth a terrible ice storm that drove the remainder of the daemons of Chaos from the field. From that day on, he has been referred to by the epithet of Stormcaller by his Battle-Brothers. This title has suited him well. In terms of raw psychic power Njal is one of the strongest human psykers in the galaxy. Njal is also a skilled warrior and master of both tactical and strategic combat, possibly surpassing even the skill of the Space Wolves' Great Wolf (Chapter Master) Logan Grimnar.

When Njal's temper is roused, the elements themselves are summoned forth to wage war upon the foe. He can summon the winds, lightning and powerful ice storms that can flay the skin from the bodies of his foes. 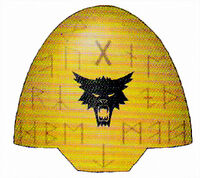 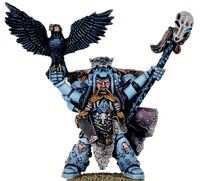 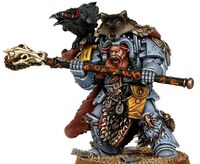 Portrait of Njal Stormcaller, the Tempest that Walks
Add a photo to this gallery
Retrieved from "https://warhammer40k.fandom.com/wiki/Njal_Stormcaller?oldid=288327"
Community content is available under CC-BY-SA unless otherwise noted.