The Night Spinner is an Eldar anti-gravity combat vehicle. It is based on the Eldar Falcon grav tank chassis and is designed to provide indirect mobile fire support to fast-moving Eldar offensives. Unique amongst artillery vehicles, it does not fire crude explosive shells like the guns of lesser races, but instead utilises a far more subtle and elegant means of delivering death from afar. The Night Spinner grav-tank mounts a Doomweaver atop its sleek chassis, a weapon that spins threads of monofilament wire into a lethal web that is launched high into the air. This monofilament mesh is made from an organic polymer compound. The compound is kept in a liquid state within a magnetic reservoir, and when released through the thousands of microscopic firing ducts, it is woven into a web-like cloud by spinning gravity clamps. This substance is incredibly thin, and yet so strong that nothing can stop its inexorable descent towards its victims. Indeed, the threads are known amongst the Eldar as the "Chain of Vaul," named after the unbreakable bonds of legend. Anyone or anything unfortunate enough to lie under a Night Spinner's ghostly web will be shredded by the simple actions of gravity drawing the cords downwards. The strands can even cut through steel, so vehicles caught by the web are likely to be snared and damaged, if not destroyed. It is not uncommon for the monofilament threads to shear clean through turrets and weapon barrels. After awhile, a Night Spinner's web will settle down into a solid blanket that can be safely traversed but, until it does so, it acts as a deadly barrier that can dissect anyone attempting to move through it. Night Spinners are also armed with twin-linked Shuriken Catapults and/or a Shuriken Cannon. A Night Spinner may also be outfitted with Vectored Engines, Star Engines, Holo-Fields and Eldar Spirit Stones.

Deathweaver Squadrons are used to destroy entire infantry formations. They primarily consist of a battery of Night Spinners which combine their fire to spin a single, ghostly blanket of death -- one far larger and denser than any could weave individually. However, these formations rely upon the skills of Rangers to be most effective. Rangers act as the Night Spinner's eyes, scouting the battlefield in search of prey. Upon sighting the foe, the Rangers will track their target and relay its coordinates, taking great pains to remain hidden until their target is in perfect position. The Night Spinners lie in wait, hidden out of harm's way, awaiting the Ranger's signal to attack.

Deathweaver Squadrons were deployed to lethal effect when the Eldar of Saim-Hann fought the Imperial Guard in the equatorial jungles of Dellerax. When a suitable target was sighted, the Rangers sniped at the approaching troops, trusting their foes' instincts would be to dive for cover. The Guardsmen, so focused on the threat of a sniper's bullet, utterly failed to notice the wraithlike webs descending upon them, fired from Night Spinners moments before. The Rangers kept their suppressive fire up until the silvery strands were a few inches above their quarry. Knowing that the Guardsmen would be unable to evade the Night Spinner's attack, the Rangers suddenly ceased their fire and melted back into the undergrowth, leaving their bewildered foes to their doom. As the confused Imperial Guardsmen raised their heads to see why the attack mysteriously stopped they met the descending wire-strands -- flesh parted without a sound and the hopelessly ensnared soldiers were slaughtered without ever truly realising the danger they were in. 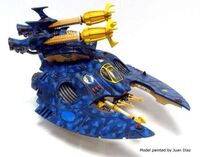 An Eldar Night Spinner of Craftworld Biel-Tan in its alternate configuration
Add a photo to this gallery
Retrieved from "https://warhammer40k.fandom.com/wiki/Night_Spinner?oldid=295854"
Community content is available under CC-BY-SA unless otherwise noted.