A Night Shroud is a dedicated Necron strategic bomber whose origins date back many millions of Terran years to the lost battles of the War in Heaven. It is a potent relic of that ancient and apocalyptic conflict that the Night Shroud was originally designed and built to carry -- the Death Sphere, a self-enclosed containment vessel carrying an anti-matter warhead capable of wiping from existence anything it encounters. The Night Shroud is larger and more robustly constructed than the far more numerous Night Scythe and Doom Scythe fighter and attack aircraft alongside which it operates. Night Shrouds were used extensively by the nobility of the Necron Maynarkh Dynasty during the Orphean War fought in the Orpheus Sector of the Segmentum Tempestus, flying with their Doom Scythe and Night Scythe escorts whilst they rained destruction down upon the Imperial defenders.

A Night Shroud is piloted by a Necron Immortal who is hard-wired into his aircraft. Because of his undying, robotic nature, the pilot is uninhibited by mortal frailties and is able to steer the aircraft at higher speeds and perform more extreme manoeuvres than pilots of flesh and blood. Likewise, a Night Shroud is also a small spacecraft that fulfils the Attack Craft role in Necron fleets, despite the lack of a cockpit to protect the pilot; such niceties as oxygen and pressure are of little consequence for the undying form of the Necrons. A Night Shroud’s design is, whilst similar to its smaller brethren, larger overall. This is primarily due to the extended rear and additional engines added to the primary "crescent" shaped hull. The Night Shroud also features thicker armour plating, secondary crescent "wings" attached to the original Doom and Night Scythe design, and an enclosed cockpit with extensive sensor arrays.

All Night Shrouds are armed with the following:

The analysts of the Inquisition's Ordo Xenos have not yet determined the technical specifications of the recently encountered Night Shroud bomber. 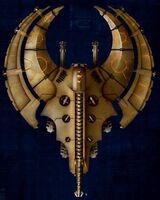 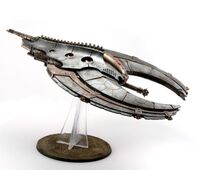 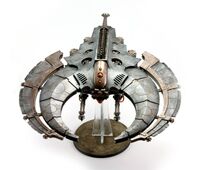 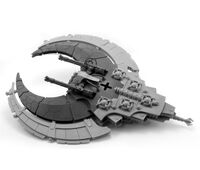 Night Shroud bomber, ventral view
Add a photo to this gallery
Retrieved from "https://warhammer40k.fandom.com/wiki/Night_Shroud?oldid=298021"
Community content is available under CC-BY-SA unless otherwise noted.