A Nephilim Jetfighter is a variant attack aircraft used exclusively by the Space Marines of the Dark Angels and their Unforgiven Successor Chapters. The Nephilim's primary role is as an atmospheric interceptor, helping to keep the skies clear over the field of battle, protecting their brethren on the ground from the threat of an aerial attack. The Nephilim is capable of flight in the void, but only for short trips, usually when deploying from an orbiting warship or The Rock itself. It has little combat capability outside of a planetary atmosphere.

Sleek air-to-air interceptors, Nephilim Jetfighters are hunting craft perfectly in keeping with the Dark Angels' secret mission. The oversized 2nd and 3rd Squads of the Ravenwing provide the pilots for these craft, their skills at performing lightning manoeuvres in high-speed warfare making them the ideal candidates for the role.

The combination of such skilled pilots with the heavy armaments, impressive speed and stalwart resilience of the Nephilim has proved a truly potent one and, since their inception in the late 40th Millennium, these craft have served as the foremost combat aircraft of their Chapter.

Nephilim Jetfighters are sleek aircraft deployed from the fighter bays of The Rock or any of the Dark Angels' Strike Cruisers. Although sometimes given the task of escorting Thunderhawk gunships to their drop sites, the main role for the Nephilim is as an interceptor intended to establish air superiority over the battlefield, allowing their brethren to concentrate on ground targets with little concern for aerial assault. Nephilim Jetfighters have only been used by the Dark Angels since the late 40th Millennium, when the Standard Template Construct data for the improved engines which distinguish this aircraft was discovered while hunting a suspected Fallen, Baelor the Imposter, in the Nephilim Sector.

Designated the Lionheart Engine, the technology was used to modify older Imperial fighter designs, though many features were left in place to appease the aircraft's Machine Spirits. The end product was a more agile fighter with improved speed, even while carrying more powerful armaments. With a twin-linked Lascannon mounted in its nose, the Nephilim is ideally suited to bringing down aerial targets. It has proven itself a skilled combatant in this role on innumerable occasions. Nephilim Jetfighters have also proven more than capable in an anti-tank role as well. When fitted with an Avenger Mega Bolter, Nephilim have proven quite effective at raking through enemy armour, whilst their brethren on the ground equipped with the usual Lascannons destroy heavier vehicles.

To pilot such swift Attack Craft, the Dark Angels have naturally turned to the Ravenwing, for the Astartes of the 2nd Company cultivate the skills needed for such rapid manoeuvres. Ever since its founding, all members of the Ravenwing have been trained to pilot any of the vehicles their company utilises in battle; however, it is the oversized 2nd and 3rd Squads that have traditionally served as the company's the frontline pilots. On the whole, the Dark Angels exhibit a general conservatism regarding their wargear, preferring the standard-issue weapons and vehicles that have served the Chapter for thousands of Terran years.

Ravenwing pilots, however, do not show such obstinacy. While they revere the ancient relics that have been used in combat since the days of the Great Crusade, they continually push the Chapter's Techmarines for enhancements, modifications or newer aircraft -- anything that can boost the speed with which they can take the fight to those who would deny the Emperor's will. Whatever the foe, the sleek Nephilim will guard the skies above their brethren, and the dark angels will rule the heavens.

The Dark Angels can claim a significant number of skilled combat pilots amongst their ranks. Of those talented individuals, only a handful have ever achieved sufficiently spectacular deeds to be awarded the order of the Silver Talon. This is the greatest honour that a Dark Angels pilot can earn, and is given only to those battle-brothers who have achieved seemingly impossible feats of heroism. Previous incumbents of the order include Brother Azaziel, who single-handedly defended the skies above Neuvenport in his Nephilim Jetfighter for six hours against successive waves of Necron Doom Scythes, and Brother Raphaenus of the Ravenwing, whose airborne capture of the Fallen known as Ghuldarkk is legendary within the Inner Circle.

Recipients of this award have their names graven into the Gate of Angels, the huge stone arch that gives access to the Rock’s largest launch bay. Furthermore, they are permitted to wear a simple silver pendant in the shape of a Raven’s talon, and to have the same device painted onto the hull of their Nephilim or Dark Talon. This is an unusual – if understated – decorative honour that shows how greatly the Dark Angels value their ace pilots.

The Nephilim Jetfighter is armed with a twin-linked Heavy Bolter, a twin-linked Lascannon and possesses hard points usually fitted with 6 Blacksword Missiles. These missiles take their name from the ominous black contrails they leave in their wake, and are used primarily to bring down enemy flyers and light ground vehicles.

When pursuing an anti-armour ground attack role, the Chapter's Techmarines may replace the aircraft's twin-linked Lascannons with a potent Avenger Mega Bolter, which fires explosive bolts intended to penetrate the heaviest of vehicle armour.

A standard Nephilim Jetfighter is armed and equipped with:

The Nephilim Jetfighter may replace its ventral-mounted Avenger Mega Bolter with the following weapons:

The following are a list of known formation that include the Nephilim Jetfighter:

The Nephilim Jetfighter has at least one known variant, which is also used exclusively by the Dark Angels and their Unforgiven Successor Chapters:

No technical specifications for this aircraft have been released publicly by the Adeptus Mechanicus at this time.

A Nephilim Jetfighter of the Dark Angels in combat 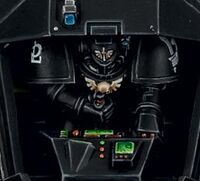 The inside of the Nephilim's cockpit

A Nephilim Jetfighter of the Dark Angels Chapter, front-dorsal view 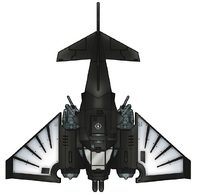 Nephilim Jetfighter Knight of the Gloaming, displaying the Ravenwing insignia and its squadron number.