"Awake now, oh Dreadknight! Lend me your strength and fortitude, and I shall reward thee with righteous purpose."


— from the Rites of Awakening

The Nemesis Dreadknight is a humanoid combat walker deployed by the Grey Knights Space Marine Chapter for the express purpose of battling the Greater Daemons of Chaos. A marvel of Imperial technology, these adamantium-alloyed exoskeletons are layered with bonded-ceramite plates and armoured control linkages, and allow a single Grey Knight to stand on an equal footing with the infernal children of the Dark Gods while also enhancing his natural psychic abilities.

In many ways, Dreadknights are a more powerful and advanced version of the standard Space Marine Dreadnought. However, Dreadknights are not true cybernetic combat walkers but advanced exoskeletons intended to be used by any Astartes trained in their use to enhance his physical strength and firepower beyond even the superhuman norm of the Space Marines. These warmachines are currently exclusive to the Grey Knights.

Dreadknight exoskeletons were designed and built for the purpose of allowing a single Grey Knights Astartes to combat powerful Greater Daemons and Daemon Princes who are physically far stronger than even the oldest and most experienced Space Marine. In appearance, Dreadknights are quite different from standard Dreadnoughts. They are taller, bulkier and appear as a humanoid-shaped exoskeleton.

The Nemesis Dreadknight was created by the Grey Knights Chapter to be the ultimate weapon in the fight against Chaos, specifically against the dire threat presented by Greater Daemons. A Dreadknight is taller, stronger and more heavily armoured than even a Space Marine in Terminator Armour. The epitome of technology, at the heart of the Nemesis Dreadknight is an adamantium-alloy exoskeleton, whose limbs are given life by a compact but powerful plasma reactor.

Over this are layered a series of bonded-ceramite plates and armoured control linkages. The pilot controls his Dreadknight using synaptic implants in a way similar to how Tau Fire Warriors control their Battlesuits. This system provides the pilot with complete control of the machine's limbs and weapon systems. It is not known if the neural impulse technology that drives this formidable weapons system is a fragment of Mankind's lost inheritance preserved from the Dark Age of Technology or if its origins lie with recovered xenos technology.

Either way, the Grey Knights are silent on the subject, determined never to share their arcane secrets with outsiders. Since the Grey Knights stand apart from other Imperial forces and answer only to the Inquisition, they can afford to withhold such secrets, though such a policy violates the edicts of the Adeptus Mechanicus which requires that all recovered technology be turned over to the Tech-priests of Mars.

To develop the mental and physical reflexes needed to pilot a Nemesis Dreadknight, a Grey Knight Astartes must train for many years. Unfortunately, not all Grey Knights possess the strength of mind and subtlety of reaction required to master the exoskeleton's many combat stances. Only a very few Battle-Brothers display enough aptitude to begin the training, let alone control such a weapon in the heat of battle. As such, Nemesis Dreadknight pilots are amongst the Grey Knights' most honoured warriors, for they have mastered skills that are the envy of their brethren.

To become a Grand Master of the Grey Knights is a rare honour, and one that only the strongest-willed of warriors earn. It is no surprise that many such lordly heroes possess the mental fortitude required to enter battle clad in the raiment of the Nemesis Dreadknight.

Deep within the Grey Knights' fastness on Titan lies the Hall of Giants, an echoing cloister lined with candle-lit alcoves. Within these loom ancient and revered Dreadknight suits, reserved for the use of the Chapter's Grand Masters.

Whether teleporting into battle at the head of an elite strike force, striding out to duel the greatest daemon lords, or embarking upon some doom-laden personal quest, when Grand Masters combine their exceptional might with that of the Nemesis Dreadknight, no malefic entity can stand against them

A Nemesis Dreadknight is optimised for close combat and is normally armed with one or two Nemesis Force Weapons for melee combat, such as one or two Nemesis Doomfists, a Nemesis Greatsword or a Nemesis Daemonhammer, each of which can focus and enhance the innate psychic abilities of the walker's Grey Knight pilot.

Dreadknights are also often equipped with ranged weapons such as a Heavy Incinerator, a Gatling Psilencer or a Heavy Psycannon. Many Dreadknights also make use of integrated personal teleporter technology to unleash near-instantaneous assaults against a daemonic enemy that rarely knows fear.

A standard Nemesis Dreadknight is armed and equipped with:

A Nemesis Dreadknight may take the following ranged weaponry, though these do not replace its Dreadnought Close Combat Weapons (Nemesis Doomfists) as they are wrist-mounted:

A Nemesis Dreadknight may replace one of its Dreadnought Close Combat Weapons (Nemesis Doomfists) with either of these options:

A Nemesis Dreadknight may also take any of the following equipment:

A Nemesis Dreadknight may also have the following upgrade:

When strapped into the command harness of the Dreadknights' pilot compartment, the exoskeleton's synaptic implants grant the operator complete control over its movement and weapons fire.

When matched with the Nemesis Dreadknight's devastating weapon systems and the all-but-impenetrable gravitic forcefield that protects the otherwise exposed pilot, this combination serves to elevate the Grey Knight's combat abilities to a point where he can withstand the blows of even the mightiest denizen of the Warp and unleash a fearsome counterattack in reply.

Whilst other warriors would perhaps shirk such a brutal path, Nemesis Dreadknight pilots embrace it, knowing that each trial furnishes them with new knowledge and skills. Thus is the Dreadknight honed until it is one of the sharpest blades in the Emperor's hand. For a Grey Knight, there can be no greater honour than to pilot one of these arcane war engines.

A Grey Knights Brotherhood is one of the most formidable fighting formations in the galaxy. Under the command of its Grand Master and Brother-Captain it comprises over a hundred elite warriors of the Emperor, each one armed and armoured with the finest wargear available to the Imperium. Even more impressive than the firepower an assembled Brotherhood can muster is its prodigious psychic might, each and every Grey Knight a powerful psyker able to merge his will with that of his brothers to crush anything that stands in their way.

It is rare that the Grey Knights will assemble an entire Brotherhood, and only in times of direst need does the Grand Master call upon the combined strength of his warriors. However, when the Brotherhood gathers it is a fearsome and glorious sight to behold. The air practically hums with barely contained energy as the combined wills of a hundred Grey Knights gather in one place, the very Warp responding to their presence. Just as a squad of Grey Knights Battle-Brothers have a strength of will greater than the sum of its psykers, so too does a Brotherhood outstrip a squad by a magnitude of mental power. The results are nothing less than catastrophic for their foes, the blistering energies conjured by the collective Grey Knights able to banish daemons in the blink of an eye and push back the tides of the Warp by force of will alone. For this reason Brotherhoods are gathered when a single squad or strike force would not suffice, such as when a world has been enveloped by the Immaterium or a vast and terrible Greater Daemon has torn its way into reality.

Grey Knights Brotherhoods also excel at conventional warfare, carrying all the weapons they require to deal with a myriad of foes. Terminator Squads form the mailed fist of the Brotherhood, their Nemesis Force Weapons and Storm Bolters more than capable of shredding most foes. Strike and Interceptor Squads provide a rapid response force for the Brotherhood, appearing swiftly to exploit their enemies' weak points or prepare the way for the Grey Knight assault. Purgators provide heavy fire support in the form of Incinerator, Psilencer and Psycannon barrages. Deployed in the right place, a Purgation Squad can clear the battlefield of foes. To deal with larger enemies, Brotherhoods can call upon Dreadnoughts and Nemesis Dreadknights, their servo-assisted fists and blades the equal of any Warp-birthed monster. Finally, the Brotherhood has the peerless leadership of a Grand Master to guide it in battle. 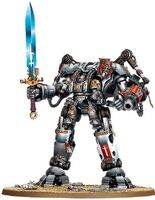 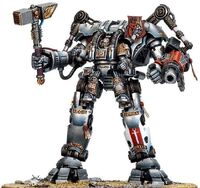 A Nemesis Dreadknight armed with a Nemesis Daemonhammer and a Heavy Psycannon
Español
Community content is available under CC-BY-SA unless otherwise noted.
Advertisement