"We claim this domain for the Emperor!"

The Necropolis Hawks is a Loyalist Space Marine Chapter comprised entirely of Primaris Space Marines. It was created from the rare lineage of the Raven Guard and raised during the Ultima Founding of ca. 999.M41.

Trained extensively in close-quarters warfare and veterans of a dozen close-fought cityfights, the Necropolis Hawks are stoic and efficient in their warfare.

They bear their battlefield role insignia upon their backpacks so that their comrades can identify them even in the choking smoke and dust of urban war.

Although a newer Chapter, the Necropolis Hawks have earned a reputation for pragmatic brutality and relentless, if carefully measured, aggression.

The Necropolis Hawks wear blue-grey Mark X Power Armour. The Aquila or Imperialis on the chest is gold. The helm, backpack, pauldrons, pauldron insets and gauntlets are white.

The livery of the Necropolis Hawks is well chosen, for it enables them to blend into the ruined urban landscapes, cordite-scented smoke and dirt-smog typical of war in a dense cityscape.

The squad specialty symbol is also displayed on the backpack for easier identification during urban combat.

The colour of the shoulder pauldron trim and top of the helm also designates company colour in accordance to the tenets of the Codex Astartes -- i.e. White (1st Company), Yellow (2nd Company), Red (3rd Company), etc.

Necropolis Hawk Veteran Sergeants are designated instead by a red helm with a white vertical stripe centred upon it, while Sergeants wear a solid red helm.

Lieutenants are designated by a white helm bisected by a large, vertical white stripe, with two smaller vertical red stripes to either side.

The top vent of the Necropolis Hawks' standard Battle-Brother is yellow, while the rest of the helm is white. The faceplate on all helms is white as well.

The Necropolis Hawks' Chapter badge is a stylised black raptor's head, reminiscent of the ancient Raptor Imperialis symbol of Terran Unity, centred on a field of white, which represents the sharp wits and visual acuity that make them such formidable urban fighters. 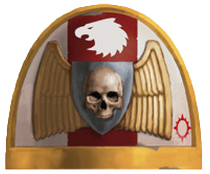 Higher ranks amongst the Necropolis Hawks are often denoted by the wearing of an embellished white Chapter badge. 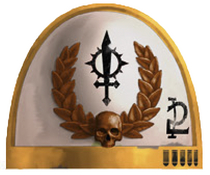 During the War of Beasts fought on Vigilus, the sword and halo was a device worn by those in Dontoria Hivesprawl who slew a Heretic from the infamous Death Guard Traitor Legion.