"Your desires are irrelevant. This galaxy once knelt before us, and it will do so again."

A Necron Overlord is the greatest and most powerful of the Necron race, and the ruler of many Tomb Worlds. More powerful then even a Necron Lord, at a Necron Overlord's command are uncountable legions of Necron Warriors, terrifying war machines, and a vast array of devastating weaponry. Normally equipped with a Staff of Light, Necron Overlords are brilliant strategists, capable of calculating every possible outcome in the ensuing conflict and formulating strategies to ensure that everything goes to plan. Only the most unlikely of tactical or strategic situations can baffle a Necron Overlord and only the most potent foes have any chance of beating one in combat. The most powerful Necron Overlords are those that rise to the rank of Phaeron, ruling over an entire Sector of the galaxy.

The nobles of the Necrontyr kingdoms emerged far better from the race's biotransference into their machine bodies than did the plebeian classes. Within the engrammic circuity housed within their new bodies, the Necron nobles retained their intellect and personality which was far more extensive than that granted to the lesser Necrontyr. Most Necrons emerge from the Great Sleep as dull-witted creatures, with little memory of the individual they once were. Yet, unless they suffered damage during their long dormancy, Necron Lords and Overlords retain all the personal drives, obsessions and nuances of personality that they once possessed as organic beings. A Necron Tomb World is home to dozens, or even hundreds, of Necron nobles, but only one has the power of absolute rule. For most coreworlds and fringeworlds this individual is a Necron Lord, while Necron crownworlds and particularly important coreworlds will be ruled by Necron Overlords. A particularly powerful Overlord, known as a Phaeron, will also lay claim to a crownworld, from which he rules his entire Necron Dynasty.

Amongst the Necron nobles of a Tomb World, political infighting is common and there are always countless schemes playing out, albeit at a glacial pace by the standards of other intelligent races. As a result of their android natures, all necrons tends toward calaculating behaviour and a pretender will rarely move openly against his opponent if the chance of success is outweighed by the high probability of failure. At the same time, it is not unknown for a challenged Overlord to yield to a subordinate if there is no hope of immediate victory. They will choose to wait out the passing years and centuries at a lower rank, patiently anticipating an opportunity to reclaim the power that was lost.

But if the prize is large enough, such power struggles can erupt into open conflict. When this occurs, the remaining Tomb World nobles will align themselves according to their own loyalties and ambitions, though some will wait as long as possible to negotiate the price of their loyalty. These internal conflicts invariably follow the formalised codes that governed the ancoent Necrontyr, leading to set piece battles with forces arranged and rules agreed to in advance by the competing nobles. In the times before the biotransference, such civil wars led to the slaughter of countless millions in a matter of days or weeks. But nowadays, the Necrons' cybernetic ability to self-repair enables them to wage such conflicts for years or even centuries with no discernible victor. This is reason enough for all but the most desperate or power-hungry Necron nobles to avoid such an outcome.

For each of these battles fought amongst his own kind, a Necron noble will orchestrate hundreds of sprawling campaigns against those alien usurpers who squat amongst the remains of the Necron dynasties in the modern galaxy. For many Nemesors, it is unthinkable to honour an alien enemy by following the traditional Necrontyr codes of battle. In their eyes, most intelligent races of the galaxy are little more than vermin to be exterminated with as much effiency and as little of the ancient pomp of ceremony as possible. Most of the more advanced races in the galaxy, such as the Eldar, have proven themselves unworthy of being treated as equals. As a result, assassination and ambush -- forms of battle forbidden in wars between the ancient Necrontyr nobility -- are employed by the Necrons against outsiders with no reservations. Yet no matter how underserving a Necron ruler considers his enemies to be, he always personally oversees his forces battles whenever possible, leading his vassals into the thick of the fighting. In this way he proves his superiority and right to rule, both to his noble Necron peers and to his enemies across the galaxy.

When a Necron Overlord strides forth to war, only the strongest and wiliest of opponents have any hope of survival. His armoured form is impervious to even tank-busting weaponry and his robotic body provides him with the strength required to crush bones to dust. At his command are all the armaments of the ancient Necron civilisation: Warscythes, Tachyon Arrows and the other extraordinary tools of destruction forged by Necrontyr science. Yet perhaps a Necron noble's most potent weapon remains his mind and the absolute determination that resides there to reforge the ancient Necron empire.

A Phaeron is an especially powerful Necron Overlord, often the ruler of an entire Necron Dynasty, and thus are the true rulers of the Necron race. A Necron Dynasty can include vast numbers of Tomb Worlds, while a Necron Overlord who has risen to the rank of Phaeron rules over an entire Sector and has a court of lesser Overlords to do his bidding. Perhaps the most well known and accomplished Phaeron at the end of the 41st Millennium is Imotekh the Stormlord, who rules over the 80 Tomb Worlds that comprise the empire of the Sautekh Dynasty. In truth, a Phaeron has such force of will that he can infuse his nearby minions with a portion of his own burning determination to restore the Necron race to rulership over the galaxy, creating a near unstoppable core of resistance to any enemy. 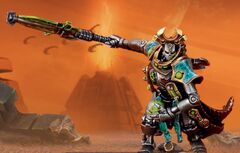 A Necron Overlord in battle 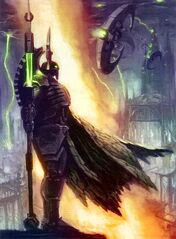 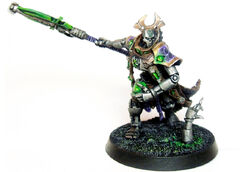 An unknown Necron Overlord
Add a photo to this gallery
Retrieved from "https://warhammer40k.fandom.com/wiki/Necron_Overlord?oldid=113072"
Community content is available under CC-BY-SA unless otherwise noted.