"Your desires are irrelevant. This galaxy once knelt before us, and it will do so again."

A Necron Overlord is one of the greatest and most powerful leaders of the Necron species, and the ruler of many Tomb Worlds. More powerful than even a Necron Lord, at a Necron Overlord's command are uncountable legions of Necron Warriors, terrifying war machines, and a vast array of devastating weaponry.

Normally equipped with a Staff of Light, Necron Overlords are brilliant strategists, capable of calculating every possible outcome in the ensuing conflict and formulating strategies to ensure that everything goes to plan.

Only the most unlikely of tactical or strategic situations can baffle a Necron Overlord and only the most potent foes have any chance of beating one in combat.

Masterful generals and warriors, bedecked in ancient and powerful battle gear of such potency it might seem the product of magic rather than science, an Overlord's robotic body is the finest construct of its kind; armoured enough to withstand anti-tank weaponry and strong enough to crush the life from his foe with remorseless efficiency.

The most powerful Necron Overlords are those that rise to the rank of phaeron, ruling over an entire Necron Dynasty.

"It seems the galaxy has forgotten us, old friend. Ready my command barge; an example must be made of these interlopers."

The nobles of the Necrontyr kingdoms emerged far better from the race's biotransference into their machine bodies than did the plebeian classes. At least as tall as an armoured Space Marine and broader than a Necron Warrior, the skeletal frames of Necron Lords and Overlords possess the strength to crush plasteel in their bare hands, and can easily resist damage that would even fell lesser Necrons.

Within the engrammic circuity housed within their new bodies, the Necron nobles retained their intellect and personality which was far more extensive than that granted to the lesser Necrontyr. Most Necrons emerge from the Great Sleep as dull-witted creatures, with little memory of the individual they once were.

Yet, unless they suffered damage during their long dormancy, Necron Lords and Overlords retain all the personal drives, obsessions and nuances of personality that they once possessed as organic beings.

A Necron Tomb World may be home to dozens, or even hundreds, of Necron nobles, but only one has the power of absolute rule. For most coreworlds and fringeworlds this individual is a Necron Lord, but Necron crownworlds and particularly important coreworlds will be ruled by Necron Overlords.

A particularly powerful Overlord, known as a "phaeron," will lay claim to, and rule, an entire Necron Dynasty. All Necron Lords and Overlords have royal courts made up of lesser nobles owing them fealty, Crypteks in their service, and, in some cases, trusted bodyguards.

These courts are commonly hotbeds of intrigue that would astound even the most conspiratorial of Imperial nobles. These royal courts often accompany their liege into battle, as well.

Amongst the Necron nobles of a Tomb World, political infighting is common and there are always countless schemes playing out, albeit at a glacial pace by the standards of other intelligent races. As a result of their android natures, all Necrons tend towards calculating behaviour and a pretender will rarely move openly against his opponent if the chance of success is outweighed by the high probability of failure.

At the same time, it is not unknown for a challenged Overlord to yield to a subordinate if there is no hope of immediate victory. They will choose to wait out the passing years and centuries at a lower rank, patiently anticipating an opportunity to reclaim the power that was lost.

But if the prize is large enough, such power struggles can erupt into open conflict. When this occurs, the remaining Tomb World nobles will align themselves according to their own loyalties and ambitions, though some will wait as long as possible to negotiate the price of their loyalty. These internal conflicts invariably follow the formalised codes that governed the ancient Necrontyr, leading to set piece battles with forces arranged and rules agreed to in advance by the competing nobles.

In the times before the biotransference, such civil wars led to the slaughter of countless millions in a matter of solar days or weeks. But nowadays, the Necrons' cybernetic ability to self-repair enables them to wage such conflicts for years or even centuries with no discernible victor. This is reason enough for all but the most desperate or power-hungry Necron nobles to avoid such an outcome.

For each of these battles fought amongst his own kind, a Necron Overlord will orchestrate hundreds of sprawling campaigns against those alien usurpers who squat amongst the remains of the Necron dynasties in the modern galaxy.

For many Nemesors, it is unthinkable to honour an alien enemy by following the traditional Necrontyr codes of battle. In their eyes, most intelligent races of the galaxy are little more than vermin to be exterminated with as much efficiency and as little of the ancient pomp of ceremony as possible.

Most of the more advanced races in the galaxy, such as the Aeldari, have proven themselves unworthy of being treated as equals. As a result, assassination and ambush -- forms of battle forbidden in wars between the ancient Necrontyr nobility -- are employed by the Necrons against outsiders with no reservations.

Yet no matter how underserving a Necron ruler considers his enemies to be, he always personally oversees his forces' battles whenever possible, leading his vassals into the thick of the fighting. In this way he proves his superiority and right to rule, both to his noble Necron peers and to his enemies across the galaxy.

When a Necron Overlord strides forth to war, only the strongest and wiliest of opponents have any hope of survival. His armoured form is impervious to even tank-busting weaponry and his robotic body provides him with the strength required to crush bones to dust.

At his command are all the armaments of the ancient Necron civilisation: Warscythes, Tachyon Arrows and the other extraordinary tools of destruction forged by Necrontyr science. Yet perhaps a Necron noble's most potent weapon remains his mind and the absolute determination that resides there to reforge the ancient Necron empire.

In battle, Necron nobles tend to favour weapons that speak to their status: staves, mighty Warscythes, and even heavy, ornate gauntlets that crackle with green flame.

Almost without exception, Necron Lords and Overlords are skilled warriors and commanders, completely capable of making split-second tactical decisions even as they cut their way through the enemy’s ranks.

In fact, the advanced technological minds of the Necron nobles are capable of evaluating possible outcomes and computing the most advantageous tactical decision with a speed and accuracy that even the most accomplished autosavant could not hope to match.

This powerful synthetic mind is at once both a great strength and, perhaps, the greatest weakness for many Necron rulers. The process of bio-transference and the long aeons have eroded the sanity of many Necron Lords and Overlords, whether by the sheer impossibility of a living mind preserved for eternity in an artificial brain, or due to simple mechanical faults. Despite the best efforts of their tomb guardians, the awakening from stasis is rarely flawless, save for the most fortunate of Tomb Worlds.

Even a minor glitch in the process can result in drastic changes to the personality of a Necron royal, or even its very perception of reality. In some cases, this serves to exaggerate the personality quirks a Lord possessed in life, while others result in bizarre, aberrant behaviour, or even severe delusions. Perhaps one of the more extreme cases of this madness can be found in the so-called Necron Destroyer Lords.

While Necron Lords and Overlords generally fight at the forefront of large armies of conquest, they are just as likely to take a personal hand in more delicate operations.

After all, few of their servants possess the intellect, let alone the initiative, to lead such missions, which could range from sabotaging a rival's own efforts, to infecting a nosy Inquisitor with Mindshackle Scarabs.

A phaeron is an especially powerful Necron Overlord, often the ruler of an entire Necron Dynasty, and thus are the true rulers of the Necron species.

A Necron Dynasty can include vast numbers of Tomb Worlds, while a Necron Overlord who has risen to the rank of phaeron rules over an entire sector and has a court of lesser Overlords to do their bidding.

As such, certain unusually powerful or large dynasties that spread across more than one sector can have multiple phaerons, who can be subordinate to a more powerful ruling phaeron, as in the Szarekhan Dynasty.

Perhaps the most well-known and accomplished phaeron in the 41st Millennium is Imotekh the Stormlord, who rules over the 80 Tomb Worlds that comprise the empire of the Sautekh Dynasty.

In truth, a phaeron has such force of will that they can infuse their nearby minions with a portion of their own burning determination to restore the Necron race to rulership over the galaxy, creating an unstoppable core of resistance to any enemy.

The Necron Overlord represents the supreme ruling class of the Necron machine-xenoform on the battlefield. Acting in turn both as warlords, leading from the front lines of combat, and as field marshals, directing their phalanxes of Necron Warriors and war machines with exacting precision, they represent both the strategic mind and the motivating force of the Necron race.

In every major warzone and conflict where the Imperium has faced the Necrons, the Necron Overlords have been encountered, and by diligent sifting of after-action reports, mortis-cortical transcripts and cogitator analysis by the Inquisition's Ordo Xenos, it has been possible to positively identify at least thirteen unique individuals of this rank who operated in the Orphean Sector alone during the Orphean War, with the strong implication of greater numbers than this in actuality.

All Necron Overlords (as with other types that have been identified by Imperial xeno-scholars as belonging to their complex ruling caste) are believed to fall within the bounds of distinct dynastic structures and identifiable noble "houses" -- powerful military and territorial factions within the Necron race.

Each Necron Overlord is a towering spectre of death graven in metal, eternal, indefatigable and utterly deadly. Just as each Overlord displays an idiosyncratic "personality" and style of warfare in battle -- which, however alien to the Human observer, clearly operates on an order of magnitude far above the rank and file of the Necrons under his rule -- so each distinct dynasty also displays an observable preference to a certain style of warfare.

In the case of the Orphean War, the principal ruling dynasty of the Necron invasion forces of the Orpheus Sector was self-identified as the Maynarkh Dynasty.

At the world of Amarah and several other warzones in the sector, the Maynarkh Dynasty's Overlords were seen to display a directly aggressive strategy, preferring to attack at close quarters, and directing their forces from the front lines, favouring continuous attacking waves with coordinated close air support, and concentrated spearheads of war-constructs used so as to isolate and destroy any pocket of strong resistance when identified.

All numbers below refer to the schematic of an unidentified Maynarkh Dynasty Necron Overlord displayed above.

A Necron Overlord can usually be found armed with one of the following:

A Necron Overlord can also be found carrying any of these pieces of Necron Wargear in addition to their primary armament:

A Necron Overlord prepares to smite a Champion of Chaos. 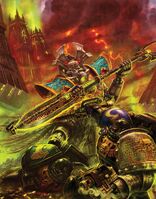 Necron Overlord fighting against a Deathwatch Space Marine of the Ultramarines Chapter.

A Necron Overlord gazing into his Resurrection Orb.

Imotekh the Stormlord commanding his legions.

An unknown Necron Overlord of the Maynarkh Dynasty active in the Orpheus Sector.

A Necron Overlord in battle.

A Necron Overlord holding up a Resurrection Orb.

Front profile of a Necron Overlord armed with a Warscythe.
Español
Community content is available under CC-BY-SA unless otherwise noted.
Advertisement