"The Destroyers? They are weapons, nothing more, and should be expended as such. They are Necron in form only, having been reborn to a madness deeper than any other so which I have borne witness. Whilst I hold nothing but approval for their drive and efficiency, I can present no logic adequate to justify their ultimate goal. A warrior's proper function is to fight for a profound objective, to leave behind works or deeds greater than himself. Given free reign, the Destroyers would leave behind nothing; not life, nor art, nor glory. Only dust would remain. I am a soulless machine, yet even I feel pity for their victims."


— Szarekh, Last of the Silent Kings

A Necron Destroyer is a deranged agent of annihilation whose sole reason for existence is centred around an unshakeable yearning to quench the flames of life. A Destroyer cares not for borders or dynasty allegiance, nor does he make any distinction between the innocent and the damned -- all life is his enemy, and all living creatures are his prey.

To this end, Destroyers regularly engage in modifications to their bodies that other Necrons would consider self-mutilation. This most commonly takes the form of replacing arms with weapons, legs with grav-platforms, and modifying heads and neural circuitry with advanced targeting systems.

The result is a single-minded killing machine able to track its quarry across any terrain and under any conditions, that quarry being any biological creature unfortunate enough to draw the Destroyer's attention.

The insane Destroyers are shunned and feared even by their fellow Necrons. These outcasts gather on the fringes of Tomb Worlds to form Destroyer Cults of the Red Harvest, said to be led by Necron Lords afflicted with the same madness.

These so-called "Destroyer Lords" combine the intellect, cunning, and nigh-invulnerability of a Necron noble with the deadly purpose and enhanced systems of a Destroyer.

In essence, a Destroyer is a heavily altered variant of the Necron Immortal. Their torso is fused to a skimming anti-gravity flyer that enables them to attack faster and further than the standard Immortals. Destroyers are equally broad with a more pronounced spine from which their terrible weapons draw their power.

Ferociously quick, the most common use for Destroyers is as mobile fire support platforms. Remaining at the forefront of the Necron force's bloody harvest, they reap a heavy toll on the enemy, the speed and ferocity of their attacks undiminished by their antiquity.

Destroyers are equipped with a Gauss Cannon that is capable of extensive devastation and is especially effective against light infantry forces. Destroyers are even capable of reliably damaging light armoured vehicles. With their superior anti-gravity technology their mobility equals that of an Eldar Jetbike.

Not all Necrons awaken from the Great Sleep as was intended. Some suffer physical damage in the intervening millennia; usually faulty stasis-crypts bring on a slow decay that rots the mechanical Necrodermis body and erodes engrammic pathways and synapses. Others become infected by the Flayer virus and devolve into creatures whose reason is subsumed by an unnatural taste for flesh.

Yet there are also those Necrons who awaken from their long slumber with their physical form intact but their psyche torn beyond recovery. Angered and despairing of their soulless existence, these Necrons turn to nihilism.

They no longer seek redemption or repatriation with the flesh that was so long lost to them. They wish only to drive all other living things into death's welcoming embrace. These, then, are the Destroyers, the self-appointed heralds of oblivion.

What makes the Necron Destroyer so different from other denizens of a Tomb World is not his violent madness alone. Insanity infects many a slumbering Necron, though it rarely takes a dramatic form, but instead merely exacerbates the victim's innate eccentricities.

Yet even the lowliest Necron Warrior longs for a return to the Necrontyr's Time of Flesh, and because its physical form is now all that remains to echo the living, breathing, soulful creature it once was, it will under no circumstances tolerate further dilution or corruption of that physical form. Instead, for a Destroyer, everything is subsumed into the all-important goal of annihilation.

They ruthlessly adapt, augment or expunge any facet of their physical form if it will improve their mission of slaughter. Legs are removed in favour of anti-gravitic repulsor platforms, arms are fused to the workings of Gauss Cannons. Even the Destroyer's senses are reconfigured to better serve target lock and prediction capability, its neural circuitry repathed to improve response times at the cost of any remaining vestigal Necrontyr emotions.

None of this is to say that Destroyers do not feel fear. Though they might explain a retreat away as conserving resources, it is a retreat nonetheless, spurred on by a spark of self-preservation that will never quite be extinguished.

What makes the rise of the Destroyers truly disturbing is that they can be found on almost every Tomb World, from the poorest fringeworld to the noblest of Necron dynasty crownworlds. This suggests that the descent into this particular form of madness is driven by a subconscious imperative -- possibly one implanted by the C'tan during the biotransference process millions of Terran years ago.

This does not mean Destroyers hail from every level of Necron society. It takes a certain freedom of personality to embrace nihilism with such cold-blooded determination, a level of individuality denied to low-ranking Necrons.

Destroyers, therefore, almost without exception, emerge from the ranks of Immortals, the Lychguard and, occasionally, Deathmarks. Most are banished to the outskirts of their Tomb World, dwelling in isolated fortresses ruled over by courts of Destroyer Lords.

A Destroyer's chilling dedication to destruction is a valuable addition to any Necron dynasty's army. On most campaigns, their brutal efficiency more than compensates for the almost habitual insubordination with which they treat other Necrons of all ranks.

The canniest and most thorough nemesors make a direct point of building campaigns around the actions of Destroyers, rather than making doomed attempts to enforce their own battle plan on these twisted warriors.

So long as a Destroyer knows that there are other forms of life in their vicinity, it will direct its baleful attention upon their destruction, and has no intellect or focus to spare for such irrelevancies as orders and strategy.

Once the enemy is in sight, Destroyers pay little or no heed to their allies, but instead settle into optimised and self-sufficient extermination patterns: shattering enemy formations with long range salvoes of Gauss Weapon fire before moving into point-blank range to methodically scour the blackened craters for survivors.

Even the Necron nobility are not safe from the nihilistic madness that consumes the Destroyers. When a Necron Lord or Overlord succumbs, a great threat to all life is born. Ironically, the only reason the Imperium is not aware of the extent of this threat is precisely because these Destroyer Lords are so aptly named.

No one has borne witness to the atrocities committed by these steel harbingers of apocalypse and lived, and so one can only guess at the danger posed by the threat stirring on barren worlds scattered across the galaxy. While many Necron Lords and Overlords are afflicted by "eccentricities," the insanity that consumes the mind of a Destroyer Lord is something else entirely.

Like other Destroyers, Destroyer Lords modify their bodies and minds, so that they might be better suited to their overarching purpose, to cleanse the stars of all life. While this most often includes the attachment of an anti-gravitic suspensor platform in place of legs, Destroyer Lords tend to forgo the ranged weaponry commonly employed by other Destroyers in favour of melee weapons.

The Warscythe is a particular favourite, as a Destroyer Lord hovering above the heads of his enemies can take full advantage of the reach afforded by these massive melee weapons. Curiously, Destroyer Lords forgo the decorative finery commonly worn by Necron royalty. Whether this is representative of their single-minded obsession, an intentional statement, or a simple matter of practicality, none can say, for the Destroyer Lords are avoided by their former peers as much as the other Destroyers, and are not keen to engage in conversation (except to learn the location of potential targets).

The Heavy Destroyer is a heavier fire support variant of the standard Necron Destroyer. Heavy Necron Destroyers mount the lethal Heavy Gauss Cannon, an even more devastating version of that powerful weapon.

The power-generating spine of the Heavy Destroyer is much more pronounced and generates more energy than its lighter counterpart, providing their Heavy Gauus Cannon with enormous power.

Heavy Destroyers are also equipped with a specialised targeting array that enables them to home in on enemy armoured vehicles, fixing them with their baleful multi-lensed optical sensors before raking them with devastating Heavy Gauss Cannon fire that can destroy almost all opposition. 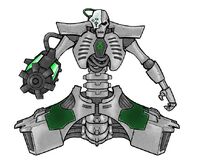 Front profile of a Necron Destroyer. Note: Destroyers commonly bear the dynastic colours of their home tomb world and its ruler, although some Destroyer Cults and their lords have grown so powerful that their own colours and markings are as famous as those of any awakened dynasty.

A different Necron Destroyer (top view) displaying personal markings on its canopy
Add a photo to this gallery
Retrieved from "https://warhammer40k.fandom.com/wiki/Necron_Destroyer?oldid=365610"
Community content is available under CC-BY-SA unless otherwise noted.