"Do not fail your Brothers. Though their bodies may die, their spirit must return to the Chapter. That is your charge. In Nostra Manus - Progenies Futura."

A Narthecium is a tool of a Space Marine Apothecary's trade, containing implements specially designed for treating the Astartes' genetically-engineered physiology and for performing first aid without having to remove the patient's power armour.

The Narthecium is either built into a bulky gauntlet module or incorporated on articulated armatures that protrude from the wielder's backpack. Containing anti-venoms, healing agents and stimm packs -- as well as having built-in surgical equipment and chainblades -- this device can be used by the Apothecary to crack open armour, carry out transfusions, repair torn ligaments, plug holes in organs and close terrible wounds.

In battle, an Apothecary carries a number of specialised items of equipment, integrating a variety of tools into his single, wrist-mounted Narthecium unit. The Apothecary may have crafted many of these tools himself according to his own needs.

He uses a high-powered laser scalpel or an adamantine-toothed chainsaw to cut away ruined armour so that he can treat a battle-brother's wounds, and he administers the panacea of drugs stored within the unit using long syringes.

The Narthecium also includes a pistol-like tool to deliver the Emperor's Peace by piercing the battle-brother's skull and brain with a metal piston. This is messy and often inefficient, though it will kill the mortally-wounded Astartes with little pain.

The chainblades and drills fitted into Nartheciums allow the Apothecary to crack open even Terminator Armour to reach a fallen brother's progenoid glands. It is essential that these are recovered, as they contain vital gene-seed without which the Chapter cannot survive.

For this the Narthecium has a carbon-alloy Reductor, a tool optimally designed for the extraction of Progenoid Glands quickly for secure storage in the Narthecium's dedicated cryo-receptacle.

The Narthecium also contains a highly secret concoction of poisons that react swiftly with a Space Marine's biology, causing massive heart failure. Even the existence of these poisons is a secret known only to the Adeptus Astartes and high-ranking members of the Adeptus Terra.

Other, non-Codex Astartes-compliant Chapters use their own variants of this equipment. Blood Angels Sanguinary Priests carry the Acus Placidus, a wrist-mounted pistol for euthanising those Blood Angels too seriously wounded to recover.

The Space Wolves' Wolf Priests bear the Fang of Morkai, a multi-bladed tool, alongside a wide assortment of potions, balms and herbs. 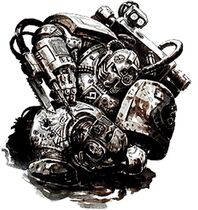