A Myrmidon Secutor was an ordained Tech-priest of the Cult Mechanicum who embodied the art of destruction at close quarters, utilising the rightly-feared Mechanicum weapons technology to further his ends. The Myrmidon Secutors were active during the time of the Great Crusade and the Horus Heresy.

Myrmidon Secutors kept no master long, but instead were drawn to battle as a vulture is drawn to carrion, always seeking fresh challenges to defeat. It is unknown if Myrmidon Secutors still exist in the Adeptus Mechanicus of the late 41st Millennium.

Unlike the Skitarii, who form the cybernetically-enhanced elite soldiery of the Forge Worlds and the military retinues of their Mechanicum masters, the Myrmidon Secutors were ordained priests of the Cult Mechanicum in their own right, but are a breed apart from their fellow Tech-priests and Magi.

Their sole concentration is the art of destruction and the embodiment of that power within their own vastly augmented bodies, in which little organic tissue remains. The Myrmidons formed their own sub-sects within the ancient Mechanicum and to them war is a matter of cold logic and murderous equation.

They keep no single master long, and instead they are drawn to battle like an apex predator drawn to the scent of freshly spilled blood, seeking out new challenges to defeat. They believe that revelations of the Omnissiah are unveiled to them in the mysteries of shot and shell.

The Myrmidon can deploy any two of the following weapons:

A trio of Myrmidon Secutors 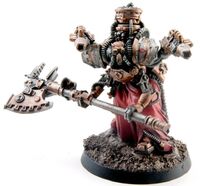 A Myrmidon Secutor armed with a formidable array of weapons 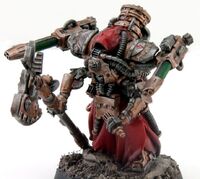 Comparison of a Myrmidon Secutor and a Sons of Horus Justaerin Terminator
Add a photo to this gallery
Retrieved from "https://warhammer40k.fandom.com/wiki/Myrmidon_Secutor?oldid=340482"
Community content is available under CC-BY-SA unless otherwise noted.