A Myrmidon Destructor was a Tech-priest of the Mechanicum who served during the Great Crusade and Horus Heresy eras and specialised in the art of destruction with ranged weaponry and the embodiment of this within their own vastly augmented bodies. It is not known if this esoteric and venerable sub-faction of the Machine Cult survived into the late 41st Millennium.

The Myrmidon sect of the cult of the Machine God was a sub-faction of the Mechanicum during the Great Crusade and Horus Heresy eras, crafting their augmetics to carry the heaviest of weapons, often only rendered portable owing to their reinforced endoskeletons and implanted power systems.

These augmentations enabled them to maintain a furious barrage on the battlefield and to do so with a precision and skill unequalled. They specialised particularly in the destruction of enemy armoured and fortified emplacements, and wielded all manner of esoteric and arcane weapons, against which conventional defences offered little protection.

As with the rest of their Myrmidon brethren, the Destructors became an increasingly important faction on many Forge Worlds on both sides of the divide of the civil war during the Horus Heresy, particularly on those Forge Worlds which became isolated and were forced to rely on their own defences, and on those, such as the worlds of the Anvillus System, where war was all but constant and planets changed hands back and forth in repeated tides of bloodshed. Here the Ur-Nomus faction, which advocated the complete armed secession from either side in the civil war, had the feared Myrmidon Destructor Lord Ymiros Cyrovile as their leader.

A Myrmidon Destructor was often deployed to the battlefield upon a Triaros Armoured Conveyor. 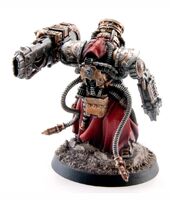 A Myrmidon Destructor armed with a Volkite Culverin 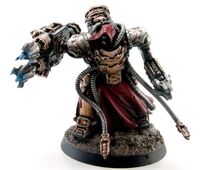 A Myrmidon Destruction armed with an Irradiation Engine 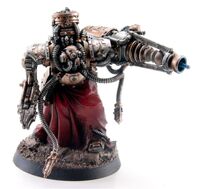 A Myrmidon Destructor armed with a Conversion Beamer

A trio of Myrmidon Destructors wielding their trademark heavy weapons

A Myrmidon Destructor standing next to a Mechanicum Tech-thrall
Add a photo to this gallery
Retrieved from "https://warhammer40k.fandom.com/wiki/Myrmidon_Destructor?oldid=340483"
Community content is available under CC-BY-SA unless otherwise noted.